Opinion - Two months after the atrocity that occurred in Christchurch, the world is still watching us. While the echoes of sympathy continue to be heard, now it is primarily words of encouragement as the government moves with unprecedented speed and thoughtfulness in trying to ensure that the chances of a repeat of the horror that occurred are reduced. 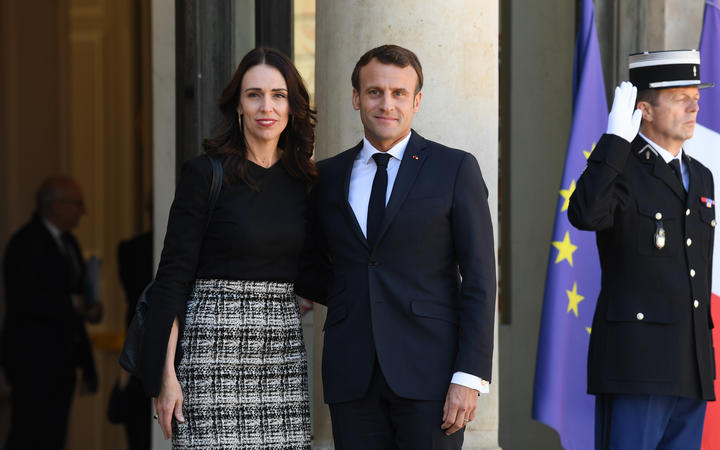 Prime Minister Jacinda Ardern and French President Emmanuel Macron at the Elysee Palace in Paris for the launch of the Christchurch Call initiative to tackle the spread of extremism online. Photo: AFP

To this goal the government has taken three steps.

First, it has authorised a royal commission to reassure the New Zealand public, including all Muslim communities, that all reasonable measures are being taken by state sector agencies to ensure their safety and protection. Second, it has started to reform the gun law, of which as an initial step, they have removed semi-automatic firearms from circulation and use by the general population.

These first two steps were relatively easy to achieve as they could be dealt with domestically. The third step deals with the fact that the accused gunman streamed his attack live to a universal audience.

This was not the first time that such an incident has occurred. Reporters have been killed on live television and jihadi groups have long known the value of live streaming of terror. What was different with Christchurch was both the scale of the atrocity and the speed with which it went viral. This was not an accident.

Solving this third part of the problem is much more difficult than the first two steps.

While New Zealand can control its own gun laws and its own royal commissions, it does not control the social media giants that are hosted in other countries and link together billions of people.

Changing your own country is one thing, but trying to change the world, is something completely different. This is especially so when earlier attempts to start to regulate the internet in this area have proved futile.

Despite these challenges our prime minister has now begun the process whereby the terrorist who tried to speak to a global audience, is starting to get a global reply. That reply is known as the Christchurch Call. This pledge aims to eliminate terrorist and violent extremism content online, while at the same time, being cognisant of upholding human rights, including freedom of expression.

New Zealand, with France, is leading the way on this issue. For our prime minister, this topic could become as important for her legacy, as the anti-nuclear issue was for David Lange.

The Christchurch Call is consistent with best international practice in this area. Similar soft and broad obligations, increased transparency and self-policing mirror comparable goals found in other initiatives like the Global Compact. The overall problem here is that there is no hard international law on multinational corporations per se, let alone for social media giants.

Part of the success of the Christchurch Call is that it is adding a new layer of soft law to a previously invisible group. The specific highlighting of the problem of live-streaming terror, and algorithms to stop it, is valuable. It is also successful as many of the heavy-hitters in terms of both 17 governments and several market leaders in social media are present.

The 55 global investors who have offered to provide their influence is also encouraging. Exactly why each of these entities will sign on to the Christchurch Call is a matter of conjecture. Some will do it for commercial self-interest, while others will do it for political gloss or true belief in what they are trying to achieve here. Cynicism aside, the point is not why they sign on, but the fact that they do, and as such, are willing to stand up and be counted.

Despite all of these good points, we must be realistic about what has been achieved. At the moment, the voluntary standards for industry and calls for governments to 'encourage', 'support' and 'consider' initiatives commit the signatories to very little. These soft obligations are the lowest common denominator by which those who were willing to turn up, were also willing to sign on.

This means not only do the signatories get to set their own standards and police themselves, but also, that critical terms like 'terrorism and violent extremism content' are not clearly defined. While many people will think this obvious when talking about the Christchurch attack (and live-streaming is singled out) others will point out that the terror attack was not only about the live-streaming, but also the manifesto that was posted online.

Without clearly defining what the target of the Christchurch Call is, some critics will argue it is too open ended, and therefore a possible restriction on free speech which is offensive. It appears that the United States, which snubbed the event, is now in this camp. The significance of the American position should not be underestimated, for not only is their voice very important, they are also the host to many of the most powerful social media platforms in the world.

The other difficulty with the Christchurch Call is that it is unclear what the follow-up will be for the signatories, how success will be measured, and what happens next with the overall initiative. While the first action of creating the Christchurch Call was impressive, the second action, when all the media buzz and the memory of the attacks has faded, will be much harder. Nonetheless, the fact that work is now beginning, limited as it may be, is the most significant point of all.

* Alexander Gillespie is a professor of law at Waikato University. He specialises in international law and is interested in the way that comparative experience is applicable to New Zealand.