Analysis - The most likely outcome of the voluntary euthanasia debate is that David Seymour's End of Life Choice Bill will be passed by Parliament, restricted to people with a terminal illness, and voters will have the final say through a binding referendum. 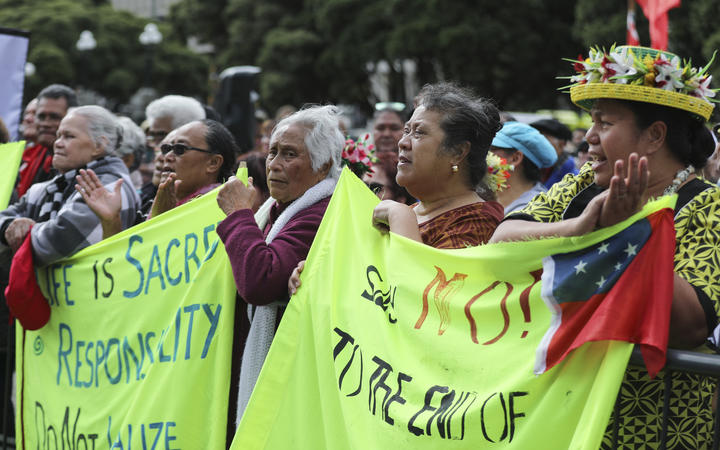 It is going through an unusual process after a select committee reported it back to Parliament this week without amendment and no agreement on whether it should be passed. The eight MPs on the committee did not feel they could make decisions on a bill which is a conscience issue for Parliament.

That was a fair call. A conscience vote is one in which 120 MPs cast their votes on an individual basis - their own conscience - and there are no instructions from their parties.

A committee of eight of them couldn't make decisions for all of them, so after 16 months and 39,000 public submissions the bill is essentially back where it started.

The circumstances around it, however, have moved on.

Mr Seymour is now willing to drop one of the most contentious parts of the bill - that it should apply not only to terminally ill people but also those with an incurable, grievous condition causing unbearable suffering.

"There is not enough support in Parliament for it to be for people who don't have a terminal illness," he told RNZ.

He was probably right about that, and he is trying to secure enough votes to get the bill through its second reading on 22 May.

A bill should be done and dusted before it reaches its second reading, carefully amended by a select committee and with a majority recommendation that it should be passed.

There is no such thing with this bill. Any changes will have to be made during its committee stage, the next one after its second reading, and those changes will be decided by a series of conscience votes.

It's likely to be a very long series. Any MP can propose an amendment, called a supplementary order paper (SOP), and many of them will.

There are MPs who totally oppose voluntary euthanasia, regardless of the terms of the bill, and there are processes they can use to try to kill it. That isn't likely to work, but they'll have a go.

Mr Seymour will put up his supplementary order paper to restrict the bill to terminal illness. That will remove a very contentious part of it. Opponents have used the provision to argue that euthanasia can be misused and abused.

Maggie Barry, one of Parliament's most committed opponents, [s https://www.radionz.co.nz/news/political/386706/voluntary-euthanasia-bill-opponents-say-sponsor-s-tinkerings-desperate has said] she believes it would allow for people suffering from illnesses such as asthma, diabetes, incontinence or gluten intolerance to seek to end their lives. "It's not just me, it is lawyers and doctors and others," she said.

Mr Seymour dismissed that as nonsense. "It simply does not stack up with any reading of the bill whatsoever."

During the committee stage, other MPs will have their own ideas about what it should cover. There will be attempts to strengthen safeguards around coercion and the need to ensure people are of sound mind when they make decisions about ending their lives.

New Zealand First will put in the SOP stating that the bill, if passed by Parliament, cannot be implemented unless a majority of voters favour it in a referendum - probably held at the same time as the next election.

There's no certainty the proposal will pass. It will have NZ First's nine votes but there will be MPs who don't want it to go to a referendum and would prefer to see it defeated in Parliament.

But the referendum SOP will appeal to MPs who aren't sure about the bill, and will feel that leaving it to the voters to decide is the best and most democratic way to reach a final decision.

Another good thing is that a bill passed by Parliament is in its final form. All the debate and argument over what should be in it, who it should cover and what safeguards it should contain will be over.

At the referendum, voters will know exactly what they're dealing with.

In the public arena, the bill is strongly supported and fiercely opposed. The End of Life Choice Society, headed by former MP Maryan Street, has consistently cited favourable public opinion polls as the reason why the bill should be passed. So the society shouldn't have a problem with a referendum, assuming the polls have been a fair reflection of public opinion.

The second reading debate has a time limit and will be over on the day it takes place. The bill passed its first reading by 76 votes to 44. Many of the MPs who voted for it said they thought it should go to a select committee and did not commit to backing it during subsequent stages.

As the committee has effectively passed its responsibilities to Parliament as a whole, the bill should get through its second reading.

Its committee stage should follow within weeks, and it will be a real marathon. The critical vote will be on its third reading, the final stage.

The 76-44 first reading vote can't be taken as any assurance that the bill has a safe majority. Conscience votes are notoriously difficult to predict, and this one has more moving parts than most.