Opinion - The latest debate on how to manage the UK's departure (on the present time table in less than two weeks) got off to a farcical start. It was April 1st after all. 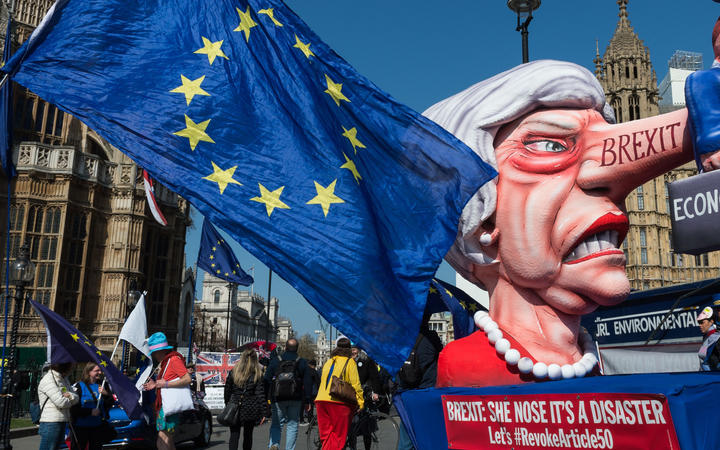 A float with a caricature of British Prime Minister Theresa as Pinocchio stands outside the Houses of Parliament during pro-EU protest on 01 April, 2019 in London, England. Photo: AFP

A dozen or more semi-naked protesters about Climate Change occupied the Public Galleries overlooking the House of Commons chamber. Members continued debating Brexit and pretended they hadn't noticed. But in the end it didn't make much difference.

At least this time, of the four motions called by the Speaker for debate, none was Mrs May's thrice rejected "deal".

The four motions would not have been binding on government decisions (any more than the Referendum result was binding: except everyone decided it was, all those years ago). However since Mrs May's deal (which critics say -on both sides- leaves the UK half in and half out of the EU) has not been a goer the House of Commons took control, so far as it could, of the leaving process.

Last week several motions were debated: all variations on how to leave the EU or in one or two cases not to leave. And just to add bit of spice the suggestion of another referendum. None succeeded. All were defeated though the margin of defeat for some was less than any of the defeats Mrs May's "deal" suffered.

Today's motions were not as heavily defeated. The first would have kept the UK in a Customs Union with the EU. Trade in goods continues as now, and there is in effect no "hard" Irish Border of the kind that used to apply.

Only the Democratic Unionist Party (representing a minority view in Northern Ireland) still sometimes wants that, depending what else is on offer.

It would, as the International Trade Secretary Liam Fox (and an arch Brexiteer) said, mean that the UK would not be free to negotiate Trade Deals of the kind he has so far failed to achieve. And which he said at the time of the Referendum result would be easy-peasy to achieve. Unless you count the Faroe Islands and Fiji as big players in the total of the UK's Trade.

So the Customs Union motion went down. but only just 273-276. Will the government consider some possibility of that folded into its rejected plan?

Next up was the "Common Market 2". This is a Free Trade Agreement where the UK becomes part of a group of 3 other associated countries (Norway, Iceland and Lichtenstein) which have access to the EU's Single Market and Customs Union. It is anathema as an idea to hard out anti EU MPs. Quite what Norway or Lichtenstein might think of an awkward monster economy like the UK muscling in is simply to speculate.

What is more whilst having to contribute to the EU budget in that scenario the UK would have no say in the EU spending or other rules. The proposal was defeated by 261-192.

The last two motions were process rather than substance. That no deal should be off the table and that there should be a referendum whatever the deal to see if the wise old UK public had a clearer view now of what the EU is and does than it did three years ago. The Referendum proposal was defeated by 280 to 292. Also closer than Mrs May's deal.

So on Wednesday this week (or maybe later) the government will come back to the Commons for another try. Of what, who knows?

At this perilously late hour will Mrs May accept that she needs to change course? Is it too late for that? Will she exhume her "deal" again for another run out?

Will Mrs May renew her vague suggestion of resigning? Who reasonably thinks Boris Johnson would make a better Prime Minister? Would a general election solve anything?

You couldn't make this stuff up.

*David Townsend is an ex-UK Parliamentary Labour candidate, a former Labour ministerial speech writer and special adviser and contributor to The Guardian, The Independent and The Times.