Opinion - In the wake of the Christchurch terror attacks, New Zealand can't forget the perspective and lessons the grief has taught us, writes Faisal Halabi from the UK. 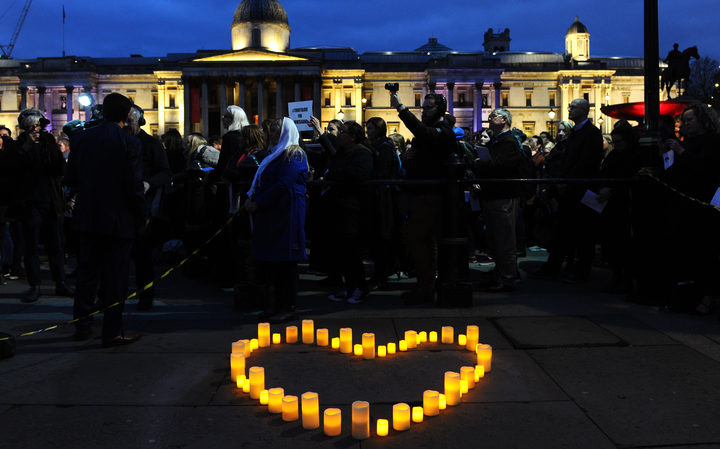 Members of the London New Zealand community and well-wishers attend a vigil in London's Trafalgar Square in honour of the victims of the Christchurch mosque attacks. Photo: AFP

I've done a lot of crying over the past week. I cried the morning I woke up and heard of the terror attacks in New Zealand.

I cried later that day at my desk at work and then on the Tube. I cried watching a live stream of the vigils around New Zealand. Standing in Trafalgar Square a week later to commemorate the attacks, and listening to the Adhan (Muslim call to prayer) being broadcast through Central London, I cried the hardest. By the time the crowd at Trafalgar Square got to God Defend New Zealand, my chest felt so heavy that I couldn't make a noise. I just stood silently in the cool London spring air, tears streaming down my face.

And then the crying stopped. That's the thing about grief: it arrives and grabs you, burns into you some perspective that you previously didn't have, and demands that you operate differently so that you can cope - all the while teaching you lessons from that perspective and from how you operate - and then it goes away. But the lessons don't go away - unless we let them.

In the days following the terror attacks in Christchurch, our country - with grief's grasp tightly around us - took on a different perspective and operated differently.

Mosques were protected by human chains and the hijab was adopted for a day by New Zealand women. Gun law reform was agreed and the Christchurch terrorist's manifesto was banned. The call of They Are Us, and discussions about how we can support our minority groups were national conversation, every moment of every day. I received messages from friends from all over the country asking me about what they could do to better things for our Arabic and Muslim communities.

Worldwide media took note of our strength, our prime minister, and our conversations. These are the lessons that grief instilled into us, and that was the behaviour that grief brought out from us. New Zealand, a secular country, broadcast the Adhan nationally on a Friday afternoon. It's not a stretch to say that what took place in New Zealand following the Christchurch terror attacks neared transformational. New Zealand found itself on the edge of change.

What happens while the nation is on that edge? It can only bring itself back from it, or it can delve right in. After a while, the worldwide headlines begin to fade and the next stage of the grieving process begins: moving on. In the same way that New Zealand took practical steps, reforms to gun law for example, it's important too to incorporate into the moving on process the lessons and behaviour that grief brought to us.

A single article cannot be a guide to how that can take place. But I have an idea. In an earlier piece I wrote, a few days following the attacks, I outlined how our Arabic and Muslim communities can be supported in the immediate aftermath of the attacks.

The answer, I believe, is underlined by a concept of distance. Love and understanding - or fear and distrust between communities - it all exists because of distance, or the lack of it. The biggest disservice New Zealand can do right now is to let the distances creep back in - not only between our communities, but between the perspective and lessons the grief has taught us, and what we do next.

How do we do it? It begins with our eyes, with our ears, and with our mouths.

It involves looking. Looking at the communities around us and identifying where that distance might be. Pause for a minute and think of a minority group that might be in your neighbourhood, and pause again to ask yourself when you last reached out - whether it be a hello on the street or a conversation in the local supermarket.

It involves listening. In the days following the attacks, media outlets prioritised the voices of the New Zealand Muslim community. Those voices were slowly overtaken by other conversations; such as law reform and global praise of our prime minister, for example. In order to close the distances, we need to keep listening to what our minority communities share with us.

It involves speaking. Let's speak out out against the forces that might allow the distances between our communities to grow - shock jocks in our media, racism disguised as humour. Let's call what happened in Christchurch for what it was - a white supremacist attack which sought to terrorise immigrants and Muslims in New Zealand.

When Peter Bracken wrote God Defend New Zealand in the 1870s, he include a line that at the time was read as a reference to the newly forged relationship between Māori and Pākehā: "In the bonds of love we meet."

The line is a call for unity in an anthem that speaks of the protection of, and love for, our country. The line acknowledges the importance of unity in reaching the goals of protection and love. If New Zealand is to take the next step from the perspective and lessons we learnt from the grief caused by the terror in Christchurch, we owe it to ourselves to turn that into practice. The bonds of love are strengthened by looking, listening, and speaking. That is how we can do it. And it'll be the line of our national anthem that I sing the loudest the next time. Without a single tear.

*Faisal Halabi is a New Zealand lawyer currently based in London. Born in Baghdad, Iraq, he was raised in Auckland.