Even the most long serving of Press Gallery reporters say they've seen nothing like the extraordinary political events that exploded at Parliament today. 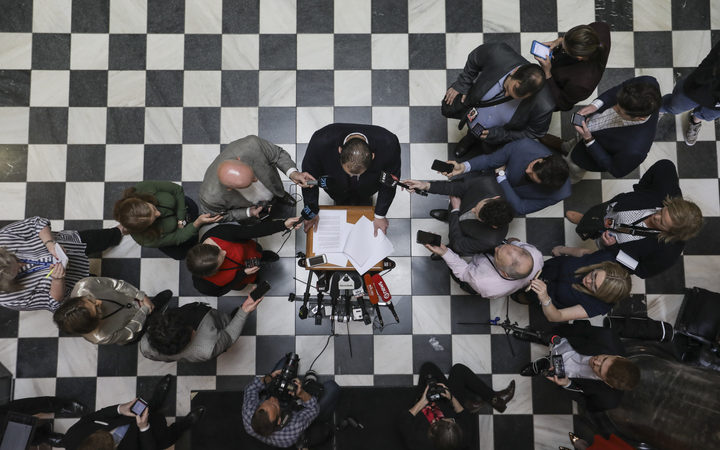 You'd have to go to back to the Lange Douglas meltdown in the late 1980s for anything that comes close.

Jami-Lee Ross, previously a National Party stalwart and an MP of seven years, dropped a nuclear bomb on his former party and its leadership.

After being named as the likely leak of Simon Bridges' travel expenses Mr Ross drove from Auckland to Wellington, in time to front up to reporters with a string of damaging claims against his former leader.

He also announced he'd quit the National Party and will resign from his Botany seat on Friday.

It was such a bizarre scenario with Mr Ross stepping up to the microphone podium on Parliament's "black and white" tiles that had earlier been prepared by National Party staff for the leader's address later that morning.

It was the second calculated move by Mr Ross in as many days to pre-empt major media appearances by the party leader, and put Mr Bridges on the back foot.

He dropped bombshell after bombshell about claims of breaking electoral law, a smear campaign with allegations against him of harassment, his own battle with mental health, his belief Mr Bridges is a power hungry, corrupt politician, and his intention to stand as an independent in Botany.

All of this with National Party MPs two floors up voting to expel him from the caucus - a move that became immediately redundant.

The lone MP laid out in great detail the utter breakdown of his relationship with the man he helped to install as leader.

Then it was the turn of Mr Bridges, the group of senior MPs surrounding him in stark contrast to the lonely and isolated figure cut by Mr Ross. 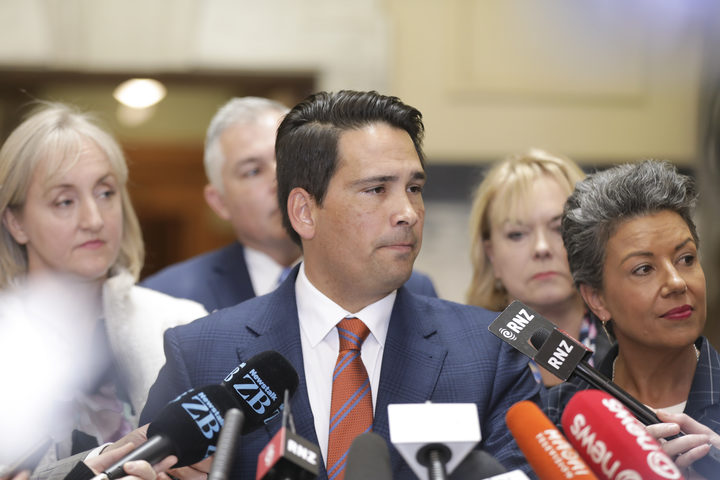 Simon Bridges was unequivocal in his denials he had done anything wrong, either in his conduct as leader or in the eyes of the law; laying the groundwork for his offensive against his former MP as a "liar, leaker, lone wolf".

But he refused to answer repeated questions about anything to do with the three donations at issue.

That includes a $100,000 donation from Chinese businessman Zhang Yikun Mr Ross claims to have received on Mr Bridges' behalf then funnel through to the National Party in amounts small enough the identity of the donor would not have to be disclosed.

He also claimed Mr Bridges knew who made a $10,000 donation in the name of the "Cathedral Club" and amended his original return to divert the donation to the National Party, along with another one of $14,000 from a company with links to the Exclusive Brethren - again to hide the donors' identities, said Mr Ross.

The claims about Mr Bridges' failings as leader and the alleged smear campaign could be explained away as the rantings of a disillusioned MP but Mr Ross claims to have hard proof to back his allegations of electoral fraud.

The $100,000 donation will be the focus of any potential police investigation, with Mr Ross presenting a phone conversation he recorded with Mr Bridges about that donation to the police tomorrow.

The accusations are serious and a conviction carries a high enough penalty to prevent a politician from holding a seat in Parliament.

The risk for Jami-Lee Ross is that after admitting his own culpability live on national media, he becomes the fall guy if the police decide to pursue any breaches of the law.

The risk for Simon Bridges is his party is living up to the nickname coined by Winston Peters - "dysfunction junction".