Opinion - It had to be Oprah. 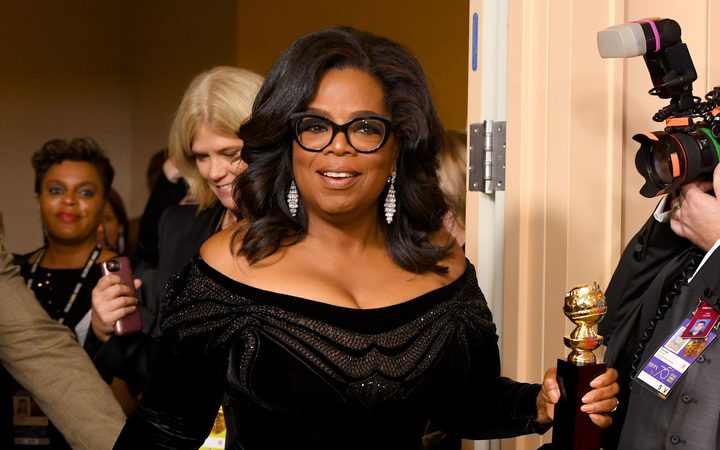 Oprah Winfrey delivered a powerful speech at yesterday's Golden Globes which has prompted speculation she is contemplating a Presidential run in 2020. Photo: AFP

This year's Golden Globes ceremony was not left wanting for powerful statements.

Actors on the red carpet called out pay inequity on the very networks interviewing them, Natalie Portman went off-script to highlight the lack of nominations for women directors, and almost everyone wore black to show their solidarity with survivors of sexual violence, and more.

Many invited activists from outside the celebrity fold as their plus-ones, ensuring the awards were explicitly politicized (as they should be: pop culture is political).

Ron Howard: "We are honored ... to be here to present the award for best director."

Natalie Portman, done with this shit: "And here are the all-male nominees." pic.twitter.com/8JboypiADo

In the awards themselves, Aziz Ansari became the first Indian-American to win the Golden Globe for best actor.

But Oprah took the spotlight. In accepting the Cecil B DeMille award, given for outstanding contributions to entertainment, she said:

"Each of us in this room are celebrated because of the stories that we tell. And this year we became the story.

"But it's not just a story affecting the entertainment industry. It's one that transcends any culture, geography, race, religion, politics or workplace.

"So I want, tonight, to express gratitude to all the women who have endured years of abuse and assault because they, like my mother, had children to feed and bills to pay and dreams to pursue."

Oprah had to be the person to make this speech.

Her position in Hollywood, in US television and culture, is unassailable. Her reputation as a performer and influencer and her freedom to say what she wants without risking her career or future prospects were critical factors allowing her to speak.

Giving the speech as she received the Cecil B DeMille award meant no one could say "who are you to tell us what's wrong with our industry and what needs to change?"

The greatest obstacle standing in the way of challenging abuse and exploitation, in any industry, is this: those most likely to be harmed are usually at the bottom of the ladder, lacking the power, the confidence, and the platform to call it out.

Even later in their careers, there's fear of retribution and backlash for lifting the lid on things "everyone knows" is happening, and "everyone else" is able to work around.

It often takes an Oprah Winfrey, someone undisputedly at the top of the game, to drop the anvil.

Even she is facing criticism, however, from those who haven't paid any attention to her history of speaking out about abuse or who have failed to learn the lesson we've all been hearing.

When the industry you work in is toxic, you sometimes have to hold your nose and get through before you can change it, or you leave, and never get the chance. Each is a valid option - the problem is the abusers, not the people who are trying to keep themselves safe.

What's most important about Oprah's speech is she draws the bigger picture.

Sexual exploitation is not limited to Harvey Weinstein, nor Hollywood, and it didn't spring from the earth fully-formed in the year of our Lord 2017.

The culture that enabled Weinstein (and all the other celebrity abusers, some of whom probably put on a black shirt and solidarity pin for the ceremony and haven't had their moment in the sun yet) is the same culture that saw Recy Taylor get no justice against the men who raped her, and wait 67 years for an apology from the state.

Too often, stories of sexual harassment and abuse become about a single, bad person doing isolated bad things, in a vacuum. Oprah stood up at the Golden Globes and said, not this time. And she was the one person who could do it so strongly.

Some are suggesting she run for President in 2020. I'm not sure if the US is ready for a successful, popular TV personality and business owner to hold such high office.

In the meantime, as Oprah promised, "a new day is on the horizon" - and it's up to all of us to make sure it dawns.

* Stephanie Rodgers is a unionist, blogger and communications consultant.