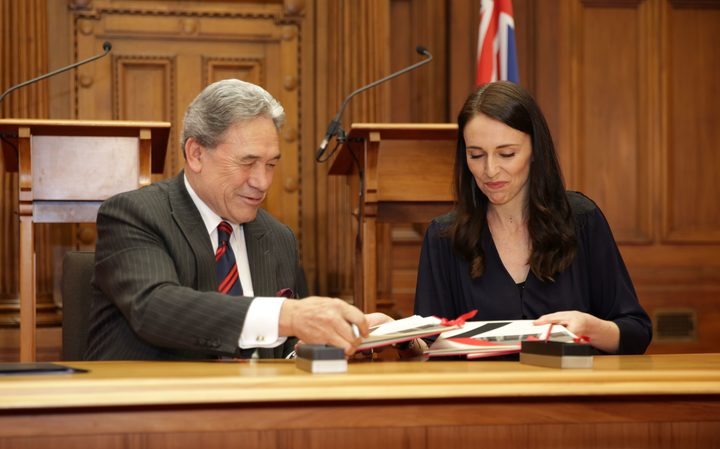 New Zealand is a small country, often wrestling for relevance in the world beyond Lord of the Ring references and sporting success. (We are very good at sport). We all know the gag about journalists interviewing celebrity visitors as they get off the plane, asking 'what do you think of the place so far?'

So it was hardly surprising to see the consternation when the mighty Washington Post ran a column Thursday titled 'How the far right is poisoning New Zealand'. Numerous journalists, commentators and politicians took to social media to express degrees of horror and ridicule. How could the 'far right' have poisoned this country without any of us noticing, they asked.

Some mocked it as satire-in-drag and "breathlessly ridiculous". "Wrong on levels yet to be described by science," one wag said. Others worried, as is our wont, what others would think of us. Former cabinet minister Peter Dunne tweeted a link, adding, "How others are now presenting us". Bah humbug.

The fuss was over this piece of commentary by columnist Ben Mack which suggests "a shadow is poisoning Middle-earth" and "the far right [has] seized power". Crikey, what's going on down here? Sounds fascinating!

While everyone is entitled to their political views, I don't reckon New Zealand politics is half as thrilling as Mack has made out.

Indeed, I couldn't name a single New Zealand politician or serious observer who would describe New Zealand politics in those terms. In short, the column is twaddle and requires rebuttal, lest Washington Post readers anyone think the country that first gave women the vote and is frequently voted one of the most transparent and democratic countries in the world has suddenly spun of its typically centrist axis.

It's true, New Zealand has just held an election and seen a change of government. It's also true that the balance of power in our proportional representation system (called MMP) was held by a party that won 7.2 percent of the vote.

With our two major parties - think Republicans and Democrats - on 44 percent and 37 percent respectively (and with the 37 percent Labour Party guaranteed another 6.3 percent from the New Zealand's Green Party), a party called New Zealand First got to decide which party led the next government.

That's the party Mack is calling the poisonous shadow and far right. Winston Peters has himself said the column reads like it was written by someone who had "escaped from a lunatic asylum at 2.30 in the morning".

Undoubtedly, New Zealand First is a nationalist party and Mr Peters has been accused by other senior political figures as being racist. You might call it nativist. Mr Peters has a record of policies - and crass jokes - that target Asian migrants in particular.

His combative relationship with the press here has drawn comparisons with Donald Trump, and his outrageous move in recent days to serve court papers on two journalists certainly gives some credence to the suggestion of Mr Peters being a somewhat poisonous presence.

But no-one - no-one - with any political nous would call the party "far right". Indeed, many of its economic policies are quite interventionist and arguably its most surprising win in coalition talks was to get the minimum wage increased to $20/hour by 2020. More importantly, it's simply incorrect to say Mr Peters and his party have "seized power".

Fact is, New Zealand First won very little in its coalition negotiations with the main parties. When, after three weeks of negotiations, Mr Peters announced his party would join a coalition with the centre-left Labour Party, the agenda was dominated by Labour policy. Mack says "the far right's influence" is already being felt, and then gives the examples of cuts to immigration numbers and what he calls "legislation banning non-citizens from owning property".

Both of those were Labour policies. The coalition agreement actually starts its section on immigration, "As per Labour's policy…" and new Prime Minister Jacinda Ardern, once negotiations had concluded, said "Labour's policy [on immigration] remains absolutely unchanged as a result of these negotiations". That was at the same time she was promising a "kinder" and "better" country.

Equally, the ban on foreign buyers has been Labour policy since 2013 and doesn't actually ban non-citizens from owning property. The new law does not strip any existing property owners of their houses, allows residents who are not citizens to buy property and allows non-citizens to build new homes here and even buy off the plans. Australia has had much the same policy in place for years.

Mack's argument that the dominant Labour Party has "kowtowed" to New Zealand First is equally inaccurate. Cloud cuckoo-land. Their claim links to a story that lists Mr Peters' bottom lines, suggesting Labour has bowed to those demands. I recognise the list, because it draws on one I drew up in 2015. Three of Peters then-eight bottom lines never featured in the 2017 campaign; four are now policy, but three were also Labour Party promises.

New Zealanders, to be frank, would be astounded to hear that New Zealand First is "pulling the strings" of a puppet Labour leadership; none more so than the Greens, which is propping up this government, having won concessions on promises of pay equity, a net zero emissions economy by 2050 and free counselling for people under-25.

Oh, and Mack says New Zealand First has "traditionally been an afterthought in New Zealand politics". Actually, it has now been a coalition partner in three of the four past New Zealand governments and Mr Peters has been both Foreign Minister and Deputy Prime Minister before.

Most New Zealanders know all this, but Post readers can be reassured. New Zealand remains a liberal democracy. If we are stuck with those Middle Earth analogies, let's just say that the orcs remain far from the levers of power.