Opinion - The last leaders debate in 1984's momentous election had David Lange facing Robert Muldoon over a table, with the amiable Iain Johnstone in the middle. 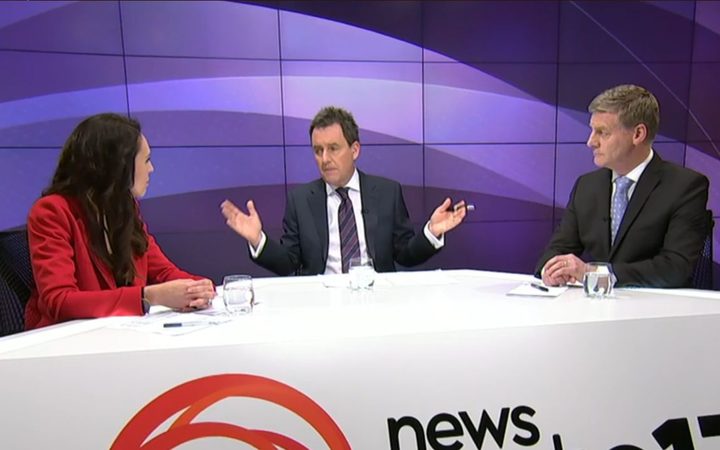 That was then, this is outer space.

Mike Hosking, sitting where Johnstone once did, flanked by Bill English and Jacinda Ardern - the finalists in New Zealand's Next Prime Minister - all of them seated at a giant geometric lotto ball.

For most of the evening, Bill will address the middle of this vast table. What does he find so comforting about it? That it is bland, empty and white?

Friendly, grinning, likeable Bill. What does he make of the urban rural divide, Mike asks him. The better question might be: how hard have you guys worked to create one, using advertising created by bearded city-living hipsters?

Bill ventures that maybe city people have just woken up to a problem with rivers that honest hard working rural folk have known about and been working on for years. Hard-working mums and dads and, of course, the 10-farm corporations.

It's a weird déjà vu for anyone who grew up on a farm watching the economics make ever less sense, while successive national governments kept bending the economy out of shape to accommodate the nation's vital backbone. Meanwhile the effluent keeps rolling down the waterways.

Weirdly a kaleidoscope streams behind Mike's head, perhaps to convey his intergalactic mental energy, perhaps to subtly remind us of stardust, even if it might be settling. Is Jacinda Ardern snatching defeat from the jaws of victory, he asks. She reminds him the Labour/Green bloc support is more or less the same as National. This is true, but not quite the pitch of her first heady days all those six long weeks ago.

It's been a while since trade agreement carve outs were discussed on TV at dinner time; possibly not since Iain Johnstone was there. The challenger sounds well-versed, the incumbent works to defend an apparently servile stance on trade agreement.

"Boring!!!" say various people on Twitter, but there are fascinating moments. Jacinda describes two tracks running in the campaign. In the media: tax. Out where the people clamour to meet her: health, and mental health. Given the number of us on antidepressants, you couldn't be surprised, really.

Once Mike has expressed his position - OH GOD HEALTH, BORING - Bill is asked to defend failures that have seen people dying in Dunedin.

He describes it as "quite a disturbing experience" and what on earth is he thinking? Moreover, where is the money? Confident and assured for the greatest part of the debate, Bill is momentarily flummoxed defending the indefensible. Regardless of the nation's thirst for health spending, National have not nearly kept pace with need, and you cannot talk that away.

Mike comes to the question of post-election arrangements and, strangely, Bill ventures the notion that as incumbent they would have first dibs on forming the next government. Really? Can we have a legal citation for that, or is this something carefully crafted by Steven Joyce for the days ahead?

For students of truth this is dispiriting. Untruths about fiscal holes, untruths about tax increases: this is what they are, but told in a father-knows-best manner it seems to be made true.

Jacinda is clear and firm and strong in her rebuttals of the untruths, but the rhetorical devastation of "uranium on your breath" is not her style, and the untruth hangs, yet, in the air.

That night in 1984, after nine long long years, Muldoon still looked sure of himself and dismissive, but gone for all money. Lange looked ready, able to convey a sense of better things.

Today's prime minister looked sure of himself and by no means gone for all money, but his challenger looked just as ready a prime minister, as Lange did that night.

Muldoon's famous last words that night were, "I love you Mr Lange." They may have been a concession; they may not.

Bill said it to no one there, not even the table. He knows the game is neither won nor lost, and so does the challenger.

David Slack is an author and columnist. He was speechwriter for former prime ministers Geoffrey Palmer and Jim Bolger.