Opinion - Why aren't the police investigating threats by boys to run over female students who organised a protest against rape culture? 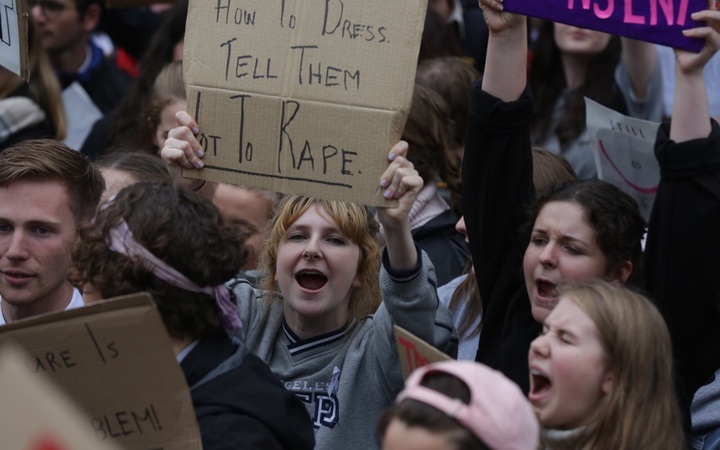 Young women who held a rally outside Parliament on 13 March moved the venue for their event, after young men said they would run them down with cars.

Threatening to kill or cause grievous bodily harm is an offence carrying a maximum penalty of seven years' jail.

People who make jokes about having bombs in their luggage as they pass through security at New Zealand airports will swiftly find themselves arrested, charged and appearing before a court.

That is because we take threats to aviation security seriously.

Why don't we do the same for threats of sexual violence against women ?

The lack of police investigation is part of our culture which values and protects boys, and teaches females that we are second-class citizens and must put up with threats, denigration and assault.

Rape culture is when female students tell us that sexual harassment and assault are everyday occurrences for them - and we do nothing about it.

Courageous and articulate young women from Wellington schools have over the past 10 days exposed the threats, insults and misogyny which are an integral part of their lives.

Sadly, we already knew this.

Courageous and articulate young women from Auckland schools told us exactly the same things in 2013, when the actions of the boys responsible for Roastbusters were publicised.

Unfortunately, we didn't care enough to put an end to this behaviour by boys.

If we really cared about sexual violence we would:

Young men learn their attitudes to women and to rape from older men.

More than 99 percent of those men don't spend five minutes of their lives acting to stop sexual violence.

It's past time for them to step up.

Catriona MacLennan is a barrister, journalist, author and media commentator, who has practised law in areas including family and domestic violence.