Opinion - Celebrate International Women's Day? Charlotte Graham reckons it feels like a surprise party after having your dog put down.

I don't mind the idea of International Women's Day. There are International Days for everything now and if you're going to throw a global celebration of pancakes every year, I suppose women may as well get in on the action. The problem is that on International Pancake Day, there's not a significant chunk of the population mulling out loud or on Facebook about how some pancakes are whiny bitches who just need to be less angry, and where's the international day for celebrating waffles, eh? (It's on March 25. And International Men's Day is on 19 November. The more you know!). As both a woman and a ginger, I just get the sense that International Women's Day is treated a bit like Hug a Ginger Day: people want to pay lip service to the idea of less discrimination, they just don't really mean it.

It's difficult to celebrate International Women's Day this year. It feels like coming home to a surprise party right after having your dog put down. Photo: 123RF

Usually I enjoy learning about badass women who were part of landing on the moon or ending slavery on International Women's Day, but this year, it's difficult to celebrate. It feels a bit like coming home to a surprise party right after having your dog put down. We're still, years on from the so-called Roastbusters scandal, having exactly the same national conversation about where to place the blame for high school-aged men bragging about raping young women. New research has shown that companies don't pay women as much as men not because of some complicated garbage "maths" about women taking time off to have children, but because they just don't want to and they know they can get away with it. Meanwhile, in America, ground-up Cheeseball sculpture Donald Trump became President of United States after his boasts about sexually assaulting women apparently resonated with more people than an actual female candidate did. Casey Affleck just won an Oscar. Johnny Depp gets to be in the Harry Potter movies. There are almost no consequences for men who hurt women.

For our sisters living in vulnerable situations, things are even scarier. Women of colour, migrant and refugee women, are dehumanised and attacked, their bodies used as a battleground for privileged people to fight their wars. For transgender women, who are far more likely to be attacked in bathrooms than they are to attack anyone themselves, it's still a daily fight just to find somewhere safe to wee. It's 2017! Weeing in a bathroom should be one of life's safe pleasures! It is still not legal in this country for women to hold the same rights to bodily autonomy that men do. Oh, and we still have to shell out for tampons, which frankly is like paying for the pleasure of having someone punch you in the uterus for one week every month.

For some men, none of these things are as infuriating as the fact that women are quite annoyed about them. These men, bafflingly, probably have wives or sisters or daughters or mums. They want other men to treat their daughters like human beings, but at the same time, they also want the right to leave comments on news articles calling women angry or unfunny or fat. They don't understand that it's their words and their actions that their sons see and repeat. They don't understand that over time, every holler out a car window, every bum-grab, every time you're cornered at a party or spoken over in a meeting or aggressively sexually propositioned at a bus stop, wears away at you like water over rock. It's so tiring. I'm so tired. And I don't know about you, but when I've been tired for long enough I get both hungry and angry.

It was into this climate that our Minister for Women, Paula Bennett, spoke last night about her attitude to feminism, otherwise known as the belief that men and women should be equal, and that steps should be taken to make it happen. The Minister had earlier made comments that she was a feminist "some days," which sparked controversy. "Yeah," I thought at the time, "About two days a week I love getting paid less and having dudes bark at me out of the windows of cars! I actually wish more men on Twitter with Trump profile pictures called me a stupid c***!" This time, Bennett clarified that she actually was a feminist, really; it was just that some women were so "anti and man-hating and awful." As if that was the worst thing someone could be. As if there was no way of understanding what women could possibly have to be angry about.

On Morning Report today, Susie Ferguson, with a lot more patience than I would have been able to muster, recounted texts from listeners positing that the reason young women are raped or spoken about in degrading ways, could be to do with their drunkenness or tight clothing. So it's International Women's Day again, and we still haven't got the message. We've bought in, for so long, to the idea that if women are just nice enough, chaste enough, modest enough, sober enough, then we'll stop beating them and raping them and following them in the street and talking about them like they're not real people. 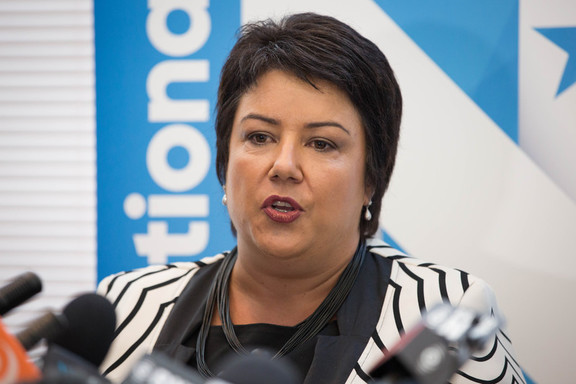 I wonder if it's fear that makes some men so unwilling to hear how women are treated and how angry we are about it. Fear that it's true, that men they know might have participated in this culture, that they themselves might have, that their sons have. The Principal of Wellington College seemed actually unable to face the idea, in interviews this week, that his students have probably acted in some of the ways they described on Facebook. But if you truly believe the young women on Morning Report this morning, that sexually inappropriate behaviour from their male peers is a "daily" occurrence, you've got to accept that it's real men - your sons and brothers and friends - who are doing it. There's not a sexual assault fairy who commits these crimes and then vanishes. It's you. That's a scary thing to face, but men need to face it.

For many men, angry women scare them because the worst thing they can think of is getting a telling-off by a feminist. For women, the worst thing we can think of is that we won't survive this stuff, or that we will but we'll walk around in a kind of shell-shock for the rest of our lives, with "I didn't want to f*** you anyway, you stupid bitch," ringing in our ears, clattering along behind us like a string of tin cans. So this International Women's Day, the best thing men could do is listen, even if it makes them feel uncomfortable, and then decide what kind of example they will set for other men.

As for Paula Bennett - who's probably spent her whole political career being told she can't be a woman and too angry - she could set an example too. Don't tell women you're only Minister for them if they're the nice, polite sort of women. Be Minister for Angry Women Who Are No Longer Putting Up with This Bullshit. I bet Bennett's got some crazy stories to tell about things men have said or done to her in Parliament. Next year on International Women's Day she's welcome to come eat chips with me and get real mad about it. Throw in free tampons, equal pay, and men taking responsibility for their behaviour, and there's an International Women's Day I could actually celebrate.

Charlotte Graham is a freelance broadcaster and writer. She is currently researching a Master's in Journalism about the online abuse of women journalists.