Analysis - Barely 48 hours ago Jacinda Ardern told RNZ that talk of her becoming Labour's deputy leader was a "distraction".

That job, she said, was just "not an issue". Her leader Andrew Little was even stronger, saying repeatedly "there is no vacancy" and "don't expect any change". 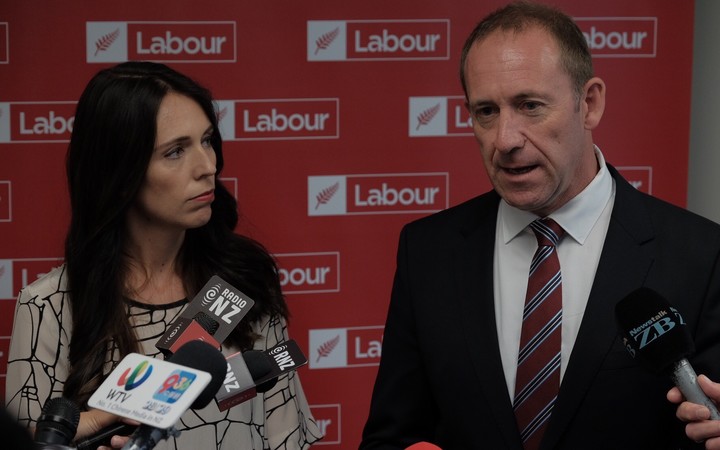 Perhaps the biggest risk to Labour is how the 'Ardern glow' bounces off her leader, Andrew Little. Photo: RNZ / Brad White

Of course, saying "there's no vacancy" left the door open for Ardern should Annette King choose to step aside. And today she's done just that.

King has given way to the overwhelming logic of generational change within Labour and Ardern will, I expect, walk into the deputy shoes even more seamlessly than Bill English walked into John Key's.

It's a move that's both full of promise and risk for Labour. First, the promise.

Ardern is Labour's most attractive face. I write that somewhat facetiously and fully understanding how loaded that word is. The baggage of looks and appearance has hung over women politicians for decades; just ask Helen Clark and Jenny Shipley. Ardern has the opposite problem. She has been deemed "pretty" and "good looking". On one hand that's a handicap as she tries to be taken seriously, but let's not pretend it's also not part of the reason for her popularity with and recognition amongst voters.

Because this is Ardern's true political attractiveness - and value to Labour: She is known. She has a personal brand that no other Labour MP has; not even her leader. She has those two most valuable, (almost) untrainable political virtues - likeability and authenticity.

That's brought rare political currency. The evidence? The power of the first name. Only a handful of politicians get first-name cut-through in the minds of voters. Big Norm, Rob, Ruth, Winston... Say Jacinda and most voters will know who you mean.

That's why her rise to the deputy's job has seemed so compelling, especially now she has a safe electorate seat under her belt in Mt Albert and a commanding majority.

Ardern looks like a winner, and that's a look Labour desperately needs. What's more, she's a 36-year-old replacing a 69-year-old, which can only help appeal to younger voters.

While it remains to be seen if she hits the political target, she is one of the few potential vote-changing weapons Labour has left in its arsenal. After two years of failing to budge the polls, this is a move Labour simply had to make.

But with opportunity comes risk. It's almost become a truism within political circles, but the cry around Ardern is always "but what has she done". She's had almost a decade in the House and a string of high-profile portfolio responsibilities - from police to vulnerable children and more - and it's a struggle to point to any impact she's had either on policy or public opinion in any. As one colleague said this morning, "but what does she stand for".

While the likes of Kelvin Davis and Phil Twyford have put their opposite numbers under pressure, Ardern seems to have left her opposing ministers largely unruffled (with the exception of irritating Paula Bennett enough to get her to snip "zip it sweetie").

But perhaps the biggest risk to Labour is how 'the Ardern glow™' bounces off her leader, Andrew Little. Just two weeks ago, the ONE News/Colmar Brunton poll had Little on seven percent in the preferred prime minister question, with Ardern on four percent.

What if, come July, Ardern is on 15 percent and Little is still in single digits? How does Labour deal with Ardern's glow then, if Little is looking like a little dark cloud?

The obvious answer is that they will push a united front and hope the glow lights up the whole party. But that could be hard to sell given we know Labour's caucus did not vote for Little and Ardern herself stood against him on a ticket with Grant Robertson.

Because of Labour's track record in recent years, questions immediately arise about leadership. Is there a faction behind Ardern positioning her for the leadership should Labour fail in September? And, as in 1993, could some in the party give less than their utmost in the campaign to ensure the leader they want next time round? Has Ardern passed Robertson now in the leadership stakes and would any future ticket between those two friends be the other way round?

These questions are all asked in the context of the Poto Williams fuss a few weeks ago, when a junior MP, having met and discussed the Willie Jackson selection with Little, still went public with her criticism... and got away with it. She blatantly rebelled against Little yet suffered no sanction, which was a pretty strong indication Little still is not entirely confident that his caucus will back him in a fight.

Then, of course, there are the questions around Annette King. She has been a loyal servant of the party through various incarnations, right back to Rogernomics. The question is whether she's genuinely happy about stepping down or only politically happy. She's long said she's wanted to see more of her grandchildren, but at the same time has seemed reluctant to step aside.

The good news for Little, however, is that while it's taken a few bumps and bruises, he now has the line-up he would have wanted heading into a campaign and one that sends some useful messages to swing voters that Labour is listening and wanting to look more like them.

In short, Ardern's promotion was essential and just too compelling to ignore. Labour now has its game face on.

And ultimately the only question that really matters to Little and Labour is how voters will respond to the change. It looks likely to be a rare orderly transfer of power within Labour and that may be the most powerful signal of all, as the party searches for the extra five percent in the polls it needs to make a race of this year's election.

This analysis first appeared on pundit.co.nz.