Opinion - Every government policy to make housing affordable since the early 1990s has been a failure, and it's time the political classes actually delivered on their responsibilities, writes Shamubeel Eaqub. 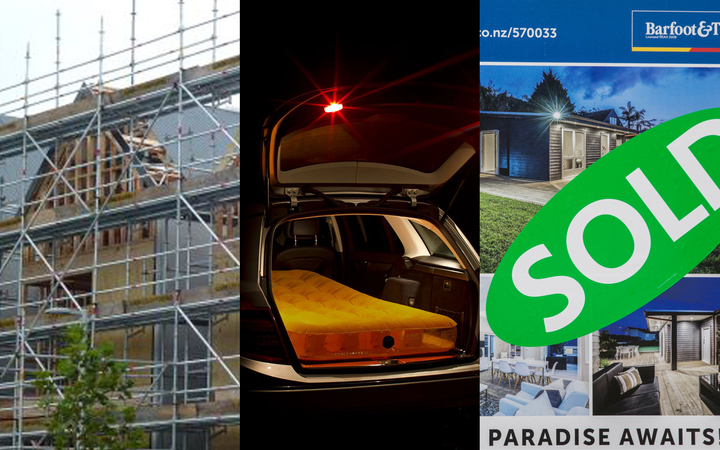 More houses need to be built, but in the meantime homelessness increases as prices skyrocket. Photo: RNZ / 123RF

Housing in Auckland is extremely unaffordable.

The latest Demographia International Housing Survey confirmed what we know - house prices in Auckland have risen much faster than incomes. So much so, that Auckland is the fourth least affordable city in a survey of 92 cities around the world.

The causes for the housing crisis have been well covered. Housing supply is too slow because of ineffective regulation, while demand is too high because of our culture, tax incentives and bank lending biases towards existing homes over new builds and businesses.

Similarities across some markets around the globe show that the drivers are not necessarily unique to New Zealand, but often the underlying causes are much the same - the economies are successful, populations are growing, and home owning and investing cultures and housing supply is unresponsive.

But some historical context is also helpful.

The increase in house prices relative to incomes is not new. It started to diverge in the 1990s. Unsurprisingly home ownership peaked then, after rising for nearly a century, and has since fallen to the lowest level since 1956.

Extremely unaffordable housing has had the expected consequences: increased homelessness, housing stress for the poor and vulnerable, and slipping hopes of middle classes ever owning their own home.

Unaffordable housing hits the poor the hardest - they face higher costs and often get shunted further away as suburbs gentrify. Lack of investment in social housing has meant that we have fewer state houses today than in the early 1990s, and relative to population, the lowest number of state houses since the late 1940s.

The boom in house prices has been so sustained that it is also impacting on middle New Zealand. Home ownership, long a rite of passage, is mostly out of reach unless home-owning parents help. Increasingly, owning a home is the domain of families already in home ownership.

Instead, an increasing number of Kiwis now rent, yet our rental policies are a relic of the past. They are better suited to temporary student flatting, rather than raising families and living in communities.

The real solution, as we have known all along, is to increase housing supply. This needs significant intervention by local and central government, with planning processes needed to accommodate more growth. Councils currently are not appropriately funded to deliver the infrastructure, and building companies do not take up enough labour and capital, because they are always fearful of big cycles.

A big programme of social housing investment by the government would provide a base of guaranteed work that would smooth out the cycles, and lead to a more resilient construction sector and economy.

We also need to reform banking regulation, to stop the pro-cyclical lending that they do, and the inefficient allocation of lending in favour of housing over entrepreneurship.

We need to think hard about how we tax property income and wealth gains, and we need to fix rental policies so that those who must, or choose to, rent do not have to live an insecure and second class life.

With each passing month and year, housing has become less and less affordable. Politics is the roadblock. The politics is difficult, but the denials of a housing crisis are now simply lies.

Yes, homeowners vote more than renters, but that should not be the guide for good government and good policy. On housing, every government since the early 1990s has been a failure.

It is time the political classes took off their blinkers and actually delivered on their responsibilities.

*Shamubeel Eaqub is an economist and partner at Sense Partners, a boutique economic consultancy.