Auckland is the fourth most expensive city in the world in which to buy a house, compared to the median income, according to a major survey. 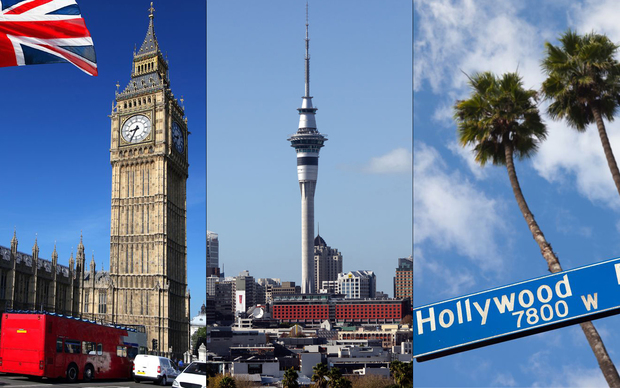 That puts the city at the fourth most unaffordable along with level with Melbourne and San Jose, California, behind only Hong Kong, Sydney and Vancouver. Auckland is up from ninth place a year ago.

The survey classes house prices above three times the median income as 'unaffordable'.

Auckland has been ranked 'severely unaffordable' in all 12 Demographia surveys. 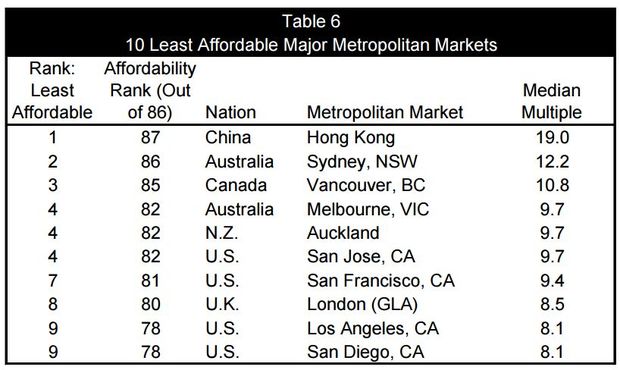 Prime Minister John Key said Auckland house prices were due to a combination of supply and demand, confidence about Auckland, low inflation and low interest rates.

"In part, it does reflect the fact that Auckland is a very attractive place to live," he told Morning Report.

This did not mean properties were out of the reach of a person on a median income, he said.

A wide range of houses were available and people could have a first home that was less than the median price and work their way up.

"We have the lowest interest rates we've had in the last 50 or 60 years, we've had mortagage interest rates with a 4 in front of them you've got banks still able to lend well in excess of 80 percent of a new home in Auckland.

Mr Key said the survey's figures could be dated because house price increases slowed at the end of last year.

"The very back end of 2015 they started coming off, I think, certainly not rising as rapidly."

However property prices had been going up too fast, he said.

"In broad terms I think everyone acknowledges that Auckland house prices have been rising too rapidly.

It was "unquestionable" that there had been a big increase in demand over the past few years.

"But if you look at what's been happening in Auckland, we have the highest level of construction in the last 11 years, we now have 106 special housing areas in Auckland, the number of consents is rising rapidly.

Getting houses built "in a hurry" and updating New Zealand's "archaic planning laws" are important in stemming house price increases, according to Kim Campbell, chief executive of the Employers and Manufacturers' Association

Mr Campbell told Morning Report the property building process was meddlesome and too many authorities were involved in the consenting process.

"There's too much uncertainty and it's too expensive."

He said people also needed to be lured out of Auckland to take the pressure off prices in the city.

Property Council chief executive Connal Townsend said the survey had been criticised in the past as a bit "rough and ready" but it was a simple multiple of median income and a direct comparison with other cities.

"I accept the numbers - I think this is pretty ghastly.

"Its really, really difficult for young people and an awful lot fear they will never get a chance to own their own bit of real estate in Auckland." The problem was spreading to Waikato and Bay of Plenty.

"I think we've got an intergenerational crisis that's going to be really hard to solve."

Building houses took too long in New Zealand because the regulations were so complicated, and supply of land was still inadequate, he said.

But last year tens of thousands of houses failed building inspections and Auckland Council is questioning whether builders were taking their responsibilities seriously or were stretched between too many jobs.

Council manager of building control Ian McCormick told Nine to Noon that of about 131,000 inspections in 2015, nearly 40,000 houses failed.

Work being done was often not consented or those doing it were not licensed.

"One of my colleagues was telling me about a property where someone ... [was] attempting to rent out a converted carport for $300 a week."

Green Party co-leader Metiria Turei said the the government was not interested in measures that could solve the Auckland housing crisis such as increased supply, a capital gains tax and regional development programmes.