Opinion - If you have tears of sympathy to spare in the wake of Donald Trump's victory, spare a few for Boots the fortune-telling goat. 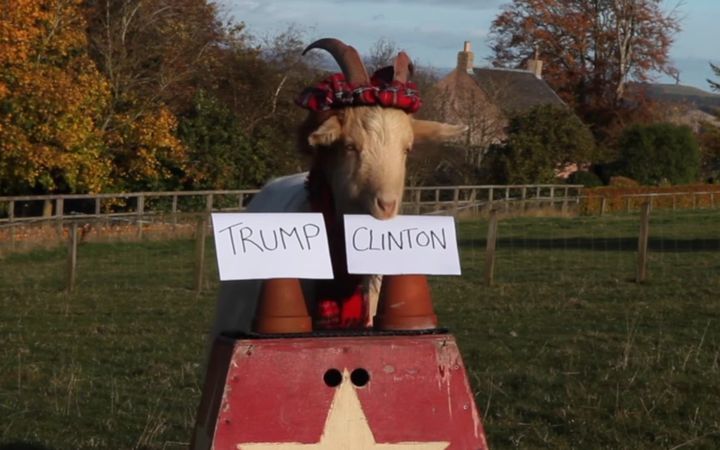 Earlier this week, the three-year-old pedigree Golden Guernsey was reported to have "predicted" a win for Hillary Clinton. Today the poor creature stands humbled, his once-stellar reputation now in tatters. Then again, he's just a goat.

He's not the only one. Clinton may have lost to Trump, but at least she will live to see another political day. In the wake of this week's presidential election result, the future job prospects for the futurologists in the media business seem considerably more uncertain - although one wouldn't wish to predict too much here of course.

In New Zealand, as in the United States, virtually no one in the news industry saw Trump's thumping victory coming.

In the end, the universal working assumption of a second President Clinton had about the same credibility as the cascade of earlier promises made by celebrities (and George Galloway, too) to move to New Zealand in the event of a Republican win.

They talked about the political future as if they really knew something, but now appear to be living a long, long time ago in a galaxy far, far away, stuck inside a somewhat professionally unhygienic echo chamber stretching from Washington to Wellington.

Why? There's no need for elaborate explanations. The simplest one will do: predictions are a mug's game, and ought to be regarded as such. Anyone who indulges in them runs the risk of looking like a chump at best or an outright snake-oil peddler.

Predictions rely on models, after all, which in turn rely on assumptions, which in turn posit a galaxy of possible events with multiple improbabilities that are basically impossible to calculate - rather like a game of chess after the opening moves have been played.

The only compelling reason to indulge in it is runaway professional pride, and we have it on reasonably good authority that such pride cometh before a fall. But there were other factors at play this week as well.

What happened was not just a notable polling failure, as the New York Times notes. It was a wholesale professional misfire, and a near-complete inability to sensitively get to grips with the Trump movement.

It was a failure "to capture the boiling anger of a large portion of the American electorate that feels left behind by a selective recovery, betrayed by trade deals that they see as threats to their jobs and disrespected by establishment Washington, Wall Street and the mainstream media". In media terms, this all made for a modern-day "Dewey Defeats Truman" moment.

It all made for a Brexit moment, too. And a Y2K moment. It made for a SARS and avian flu epidemic moment. A moment like all the other moments that have turned - often with haughty sneering at those who disagree - on prophesied events or catastrophes that somehow never materialise.

This week's case seems to have largely been about pundits muddling an outcome they wanted to see with a reality they addictively wanted to avoid. As Michael Moore has written, they had a "narrative they wouldn't let go of and refused to listen to or acknowledge what was really going on".

And it won't be the last time it happens. They'll be at it again before you know it, and the news business will be the poorer for it.

At least that's my prediction, Boots and all.

David Cohen is a Wellington-based journalist and author who writes frequently on media affairs.