The controversial Saudi sheep deal is not the first chapter in New Zealand's on-again, off-again relationship with live sheep exports and trade with the Middle East. Kim Griggs has been looking through RNZ's clippings files. 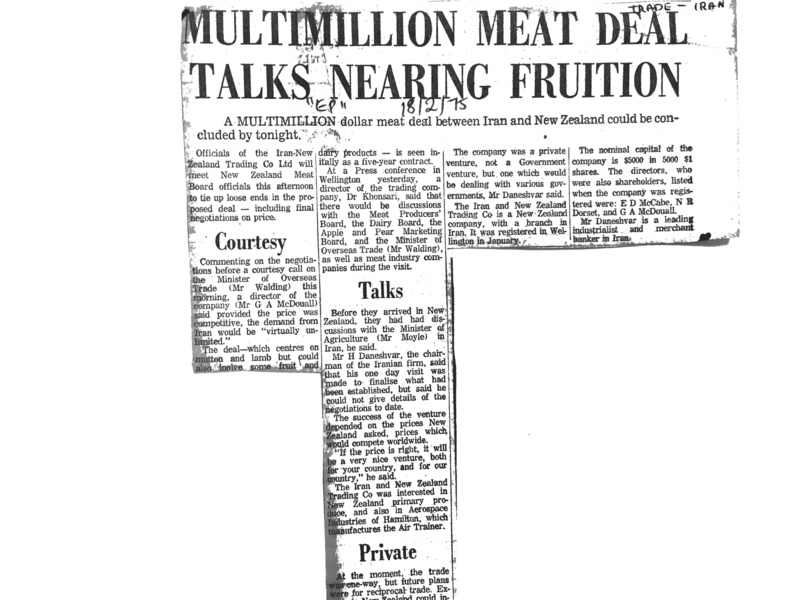 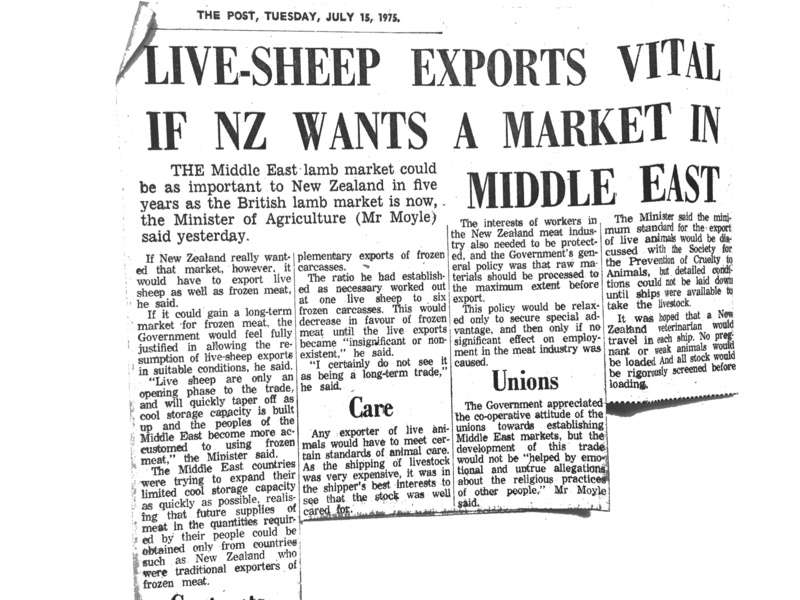 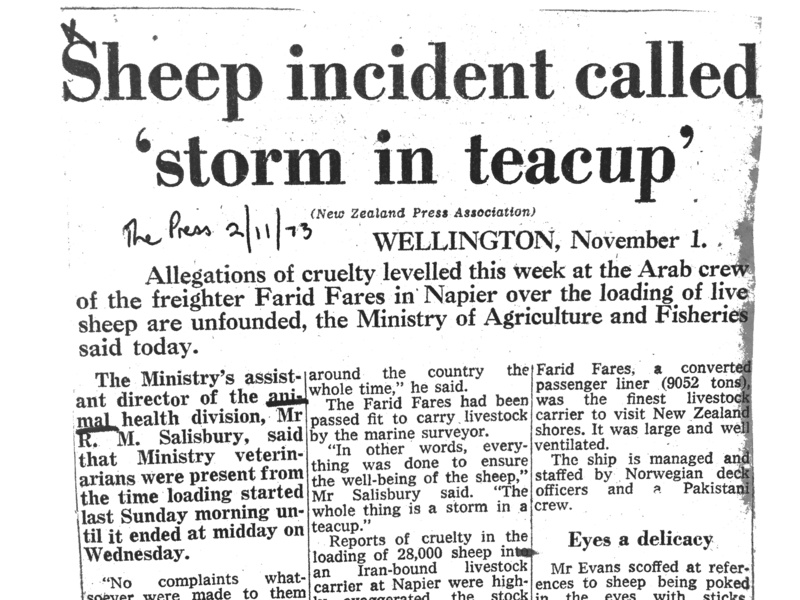 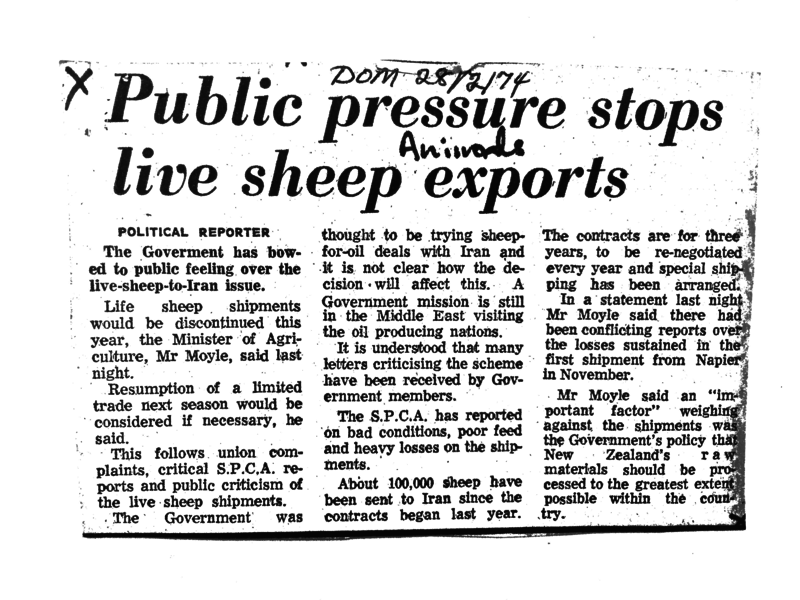 "Live sheep exports vital if NZ wants a market in Middle East", "Sheep export hurdle may be overcome", "Sheep incident called storm in a teacup" - no, not the wash-up of the controversial Saudi sheep deal but the headlines from 40 years ago, when New Zealand made its first foray into the live sheep trade.

The earliest shipment in RNZ's files dates from 1973, when 8500 sheep were shipped from Gisborne to Iran. In short order, about 100,000 sheep were sent there but it didn't last. By the beginning of 1974 the Dominion Post was reporting the government had pulled the plug on exports, bowing to public complaints over too many sheep deaths and too much cruelty.

It was a decade before shipments resumed in 1985. "Sheep trade bonanza" screamed one headline. But there was staunch opposition, not just from animal welfare lobbyists but the meat workers who didn't like the thought of their stock in trade, sheep, being sent offshore to be slaughtered.

The protests got heated and when the first live shipment for Mexico was leaving from Timaru in March 1986, 5000 farmers and their supporters gathered at the Caroline Bay Soundshell to protest at the unionists who were picketing the wharf.

The month after the Merino Express slipped its moorings, a ship bound for Saudi Arabia also left. Struggling sheep farmers were promised "a multi-million dollar contract between a Saudi Arabian livestock merchant and New Zealand firms."

The Australians (who have also had an on again, off again relationship with live sheep exports) were also sending their sheep offshore, but in 1991 they halted trade with Saudi Arabia after 11 Australian shipments were rejected for disease. The deaths of almost 10,000 sheep on board the Cormo Express (more on this ship later) didn't help in the court of public opinion either.

Australia's ban on exports from 1991 to 2000 helped boost New Zealand's exports and the mid-1990s were, briefly, halcyon years for the live sheep trade. The industry was worth more than $100 million a year in its heyday. Ships laden with more than 100,000 sheep were leaving New Zealand ports.

It was in the mid 1990s that Awassi NZ Land Holding Ltd and Hmood Al Ali Al Khalaf Trading and Transportation NZ Limited were established in New Zealand. And in April 1991 there's a report of 160 embryos of fat-tailed Awassi sheep arriving on Matiu/Somes Island, the start of a specialist trade. Three and half years of quarantine later, in 1994, they were to be released to Al Khalaf's company.

But soon the frenetic pace of live sheep exporting waned.

In 1997 the Timaru Herald reported that "The once problem-plagued New Zealand trade in live sheep is almost invisible these days. It exists, but in a much modified form and is a pale shadow of the active enterprise of the late 1980s and early 1990s".

The death knell for the already languishing trade was the disastrous voyage of the Cormo Express from Fremantle to Saudia Arabia in 2003. The shipment - being exported by Al Khalaf - was refused permission to unload by the Kingdom.

6000 sheep died after a two week journey turned into a two-and-a-half month long one. The bedraggled remnants of the 57,000 strong shipment were given to Eritrea as food aid but not before the Australian government, the newspapers reports of the time show, paid Al Khalaf $AU4.5 million for the sheep.

And back then the Australian Financial Review, at least did not confer much political influence on Al Khalaf. In fact he seemed to have little clout. A report in the Review says about the debacle "Hmood (Al Khalaf), other commercial interests, industry and government officials frantically looked for another home for the cargo. At every turn they were thwarted by the influence of the Saudis and media reports in the region that the sheep were ravaged by disease."

After the Cormo Express deaths, the New Zealand live animal export industry imposed a voluntary stop to live sheep shipments for slaughter. Then in 2007 the more formal ban was put in place - although the Customs Prohibition Order did allow the Director General of the Ministry of Primary Industries to allow shipments on a case by case basis. No authorisations have been approved or even asked for.

But Al Khalaf, who has close ties to the former Saudi agriculture minister Fahd bin Abdul Rahman Balghunaim who farms organics nearby, and his offsider, George Assaf, a Lebanese-Australian from Gladesville in Sydney, continue to plead their case until the New Zealand government forks out the contentious $11.5 million that the Auditor General has just released her report about.

It was, the New Zealand government said, needed to ensure a trade deal with the Gulf States. "There were concerns about a Saudi investor and the way he was treated in New Zealand, that was one issue," said the Prime Minister John Key in 2015.

"It was guy who invested decades and decades ago and wasn't sure he'd been properly treated, but that situation has been resolved."

So back to where we started in the RNZ clippings file and those 1970s headlines again: "Multimillion meat deal talks nearing fruition", "Deal hinges on live sheep ban","Live shipments key to sheep deal".

And do we have that trade deal? Not yet.