Opinion - The time bomb that is Donald Trump's candidacy has finally exploded and threatens to take the Republican Party with it. Could he still have an endgame? 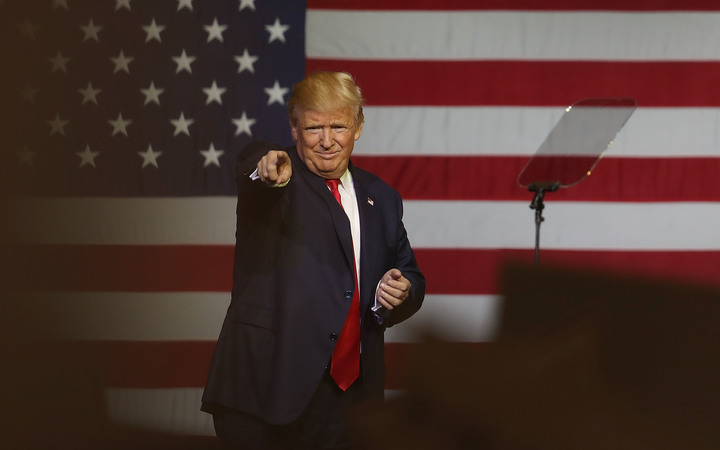 Is Donald Trump pinning his future on something other than the presidency? Photo: AFP

In 2015, Fox News made a profit of more than $NZ2 billion. Its nearest rival, CNN got barely a quarter of that. But Fox is in trouble nevertheless. The average age of Fox News Prime Time's audience is 68, while Fox star Bill O'Reilly's audience is, on average, 72.

Those numbers are a possible reason for the extraordinary behaviour of Donald Trump over the last week. More on this later, as they say on Fox.

This week has been historically brutal for Trump's campaign and Trump has been equally brutal in return.

No campaign has ever had so many cataclysmic revelations, each seemingly worse than the last. Few campaigns have ever had so much antagonism for, or from, their own party.

Certainly no campaign has ever recovered from this disastrous a position.

Incredibly, polling has Trump still leading the male vote but utterly crushed amongst women - by 61 percent (for his Democratic rival, Hillary Clinton) to 28 percent. And nearly half the interviews for that poll were done before the sexual assault bravado video or the second debate.

With that video followed by further claims of actual assaults, and Trump's reported deeply creepy underage peeping at Miss Teen USA, only a madman would believe an election win was possible.

Trump's reaction has involved no contrition, no pleas for absolution, no attempt to placate his departing support.

Instead he has regressed to the meanest, retreating to pleasing his core supporters, swinging at all-comers in a fashion that makes his base ecstatic but causes genuine distress amongst many in his own party.

The bravest Republican politicians have expressed their disgust, but for many who may want to rebel, the polls and The Donald have made it clear that he owns a sizeable portion of their vote and is prepared to use it against them.

There may actually be a plan behind this, and he may have had it up his sleeve for some time, in case of failure.

The plan takes us back to that $US2bn profit at Fox News. It would need to involve his enormous appeal amongst an extremely passionate minority.

It may also explain why Trump's favourite Fox News host, Sean Hannity was excited after the disastrous second debate performance, high-fiving Breitbart's Matt Boyle in the spin room, as if their champion was winning rather than tanking. Hannity's Fox contract was renewed in 2012 for four-plus years, which is about now.

Also consider that two powerful people in Trump's campaign team are Roger Ailes, the disgraced former head of Fox News, removed after his sexual bullying of staff became public; and Stephen Bannon, the alt-right boss of Breitbart News, an enemy of the Republican establishment.

And just one more data point to this landscape. Foursquare, a location-based retail app that has a solid track record for predicting customers, reports that Trump-branded enterprises have taken a palpable hit during the campaign. The drop is driven by a sharp decline in female customers, down by a third in Democratic areas, year on year. 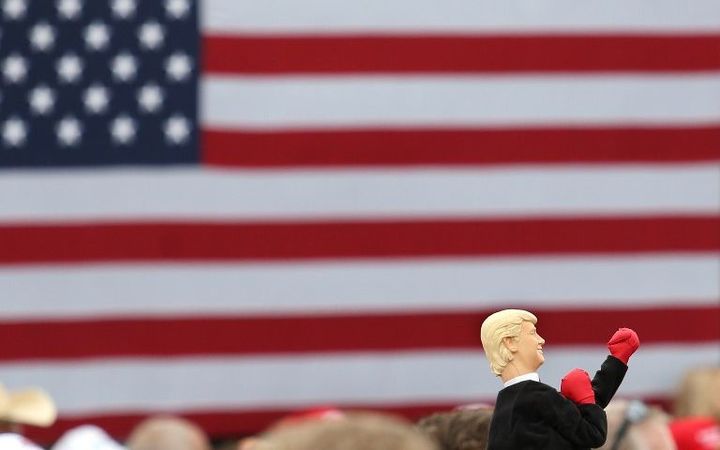 A supporter of Republican presidential nominee Donald Trump holds up a boxing hand-puppet in his likeness. Photo: AFP

This is not good news for Trump Enterprises.

Of course, Trump has managed to rustle up a few extra dollars via his own campaign, but he must be wondering whether he has now permanently damaged his brand amongst the general population and might be better off appealing to a more limited audience with fewer pesky liberals.

Back in August, The New York Times ran a piece which included this enticing sentence: "In recent months, Mr Trump and his son-in-law, Jared Kushner, have quietly explored becoming involved with a media holding, either by investing in one or by taking one over, according to a person close to Mr Trump who was briefed on those discussions."

Jared Kushner already owns a small newspaper and Trump has a video production company, but this sounds bigger, and builds on rumours from Vanity Fair, which in June wondered whether a Trump News Network was the possible endgame of his campaign.

When Roger Aisles was ousted from Fox, some staff were reported to be considering following their boss to create a rival broadcaster. It never happened, but there may be some who dream of a younger Fox, politically further to the right, and less in the pocket of the Republican establishment.

Trump TV whispers have continued, but until now they haven't seemed very likely, mostly because they didn't gel with the actions of the political campaign.

With the election slipping away, Trump has proclaimed himself unshackled, and has narrowed and strengthened his rhetoric to appeal to his core supporters.

He has created conspiracy theories to explain defeat and begun trashing his own party.

This suggests he has abandoned all hope of winning this fight, but may have another one in mind; one that aims at the anti-establishment Breitbart audience, which strongly intersects with Trump's keenest fans.

It's a political movement that could segue very nicely into a cable channel.

If it happened (which is still a big if), and if it worked, and if it carried forward the new, more rabid messages of his campaign, Trump TV would make moderate Republicans even rarer, would further divide the American populace - and would damage both the social contract and respect for the rule of law, in a country where alt-right media increasingly questions the legitimacy and usefulness of its own democracy.