First Person - Bemoaning the language of the internet age is a favourite pastime of the anti-millennial corp, but couldn't it be seen as linguistic evolution, the #youth of today making words their own, and creating a whole new way of communicating? 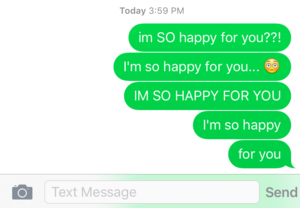 I never learned to speak a second language. My high school's French department was so sad that no one took it further than year 11, and the most exotic thing I ever learned to say in a foreign tongue was "gluten-free". The closest my school came to bilingualism was our principal occasionally greeting us with a mispronounced "ata mārie" instead of the usual stiff kia ora.

You can imagine the fear that runs through me each time a job application asks if I speak any other languages. "I'm very good at dietary requirements!" I want to cry, citing the hours I spent trailing around Verona yelling "SENZA GLUTINE?!" until someone took pity on my plight. Then it occurred to me. I am of the internet generation, and thus have an advantage over any adult these days: I am #down with the lingo. Ah, you sigh, but can that really be counted as another language when all you are doing is using a few abbreviations and occasionally capitalising entire words unnecessarily? But there is so much more to it than that.

You see, in Cyberspace - which, incidentally, is a word no one has used since those terrible anti-bullying ads from the 2000s, so is basically #vintage lingo - we don't have italics, we don't have bold, and we don't have the luxury of different tones. "I'm so happy for you" written as is could be anything from bitterly sarcastic to sexually explicit. So how have we found a way around this? How has the so-called most sarcastic, borderline-nihilist generation in recent memory translated to the medium of instant messaging?

It is perhaps a stretch to say we have invented a new language, but we have succeeded in making the verbal visual, of taking familiar characters and phrases and distorting them to bridge the gap between speech and text.

This generation has refused to let its voices be stifled or limited by the medium of online messaging; instead, we have devised a whole new branch of communication, as different from standard English as Chaucer's Canterbury Tales. It is a language that deals in excess, in the unrestrained and the hyperbolic.

I never comment, "You look nice in this photo xx"; I furiously attack the keys and end up with something along the lines of "deaARest ElegenAT FLOWER MAideN hOW is this allow???"

I look at a picture of a chair with broken legs and my first reaction is "lmao s a m e". 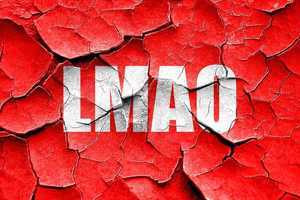 My phone autocorrects almost every celebrity's name to a misspelled, capitalised version, and any concern for which gender pronouns I should use is alleviated by the best gender neutral term of all: "fam".

When I say that something will be a "Good Time™", I am probably being sarcastic. I can write an entire paragraph without any punctuation so it feels as though you're being swept along with me or. instead. i. prove. how. disbelieving. i. can. be.

When I use an abbreviation I don't hear the full word as I type: wtf reads as it is, "wuh-tuh-fuh," and tbh sounds like "tuh-be-huh". There's a rhythm in this language that allows us to hear what we see.

allows you to get the point across in

If you reveal the punchline in the same sentence as the joke there is no humour in it. I have learned that the way we communicate online has a poetry in itself; we are perhaps more aware of spacing and how it affects our interpretations than we ever were on the page. Our words have become just as visual as GIFs or emojis are.

The dictionary no longer has a monopoly on language; the days of linguistic imperialism are drawing to a close. In place of delicate nuance we slam down heavy-handed exaggeration; restraint we replace with excess. Why use one exclamation mark when six or seven, a hyphen, two question marks, a forward slash, and couple more for good measure makes your point much more vividly? Even now, the language is evolving; by the time you've read this article I will probably have discovered five or six new ways to use the upside-down-smiley-face emoji to great effect. 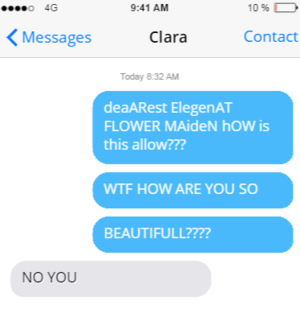 Are we single-handedly destroying the English language? Is this the slow deterioration of everything the linguists hold dear? I don't think so. I am still fully capable of churning out a 3000 word essay on the vulnerability of the body in King Lear and The Tempest. I recently wrote my grandmother a lovely email in which I did not use a single ironic hashtag. And I honestly don't think that will change. Language is constantly evolving and adapting, and our generation, in amongst its memes and its disenfranchisement with the political system - you know, all that fun stuff - has simply created a new branch. We have defeated our lack of italics.

It isn't an act of laziness at all - it takes more effort for me to intentionally misspell something than it would to simply write it the way that old academics would approve of. If I spell something correctly or don't change to capitals half way through a word hOW will they knoW How ExciTE I am????///????

Clara van Wel is a New Zealand singer and song-writer, an actor, and a student of English literature at Cambridge University in the UK.