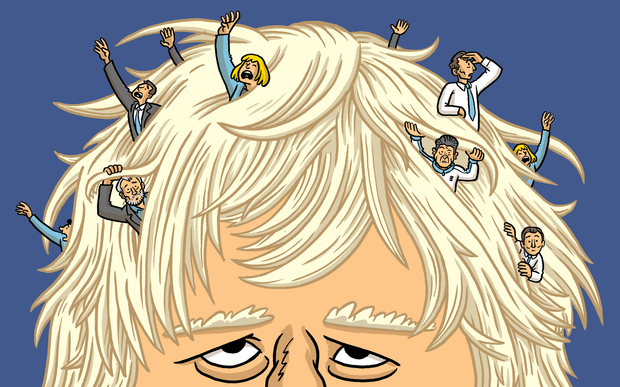 Leaderless pandemonium, old bean? Are you referring to the divisive leadup to the referendum on Britain remaining in the European Union, to the resignation of prime minister David Cameron, to divisions within the governing Conservative Party, the potential coup, even schism, in the opposition Labour Party, or the humiliating capitulation of the English football side to minnow Iceland and subsequent resignation of manager Roy Hodgson?

Yes, and let's not forget reports of a putsch among the hosts of the controversially relaunched Top Gear.

Where does Boris Johnson come into it?

Boris, or "BoJo", as he is known by no one except tabloid writers, is poised to become the next prime minister of Britain.

The Conservative MP and former Mayor of London became the frontperson of the "leave" camp ahead of the Brexit vote. He and fellow senior Tory Michael Gove added greater respectability to a side of the debate otherwise dominated by Nigel Farage and his populist fringe party UKIP. That puts Johnson in pole position to succeed Cameron in a leadership contest scheduled to be complete by September.

Why did Boris throw his lot in with Leave?

Last month the Toby & Toby Cartoonish Foreign Leaders Assessment Committee judged that he was "attempting to establish himself as the next party leader".

Didn't that same column conclude that it "looks as though they'll remain"?

Actually, it concluded "looks as though they'll bremain", in an original and witty play on the "Brexit" portmanteau.

How different is Johnson to Cameron?

Some differences, to be sure. But also a fair bit of - how to put it? - continuity. They both went to Eton (Boris was two years above David), and both went to Oxford, where they were members of the same super-posh Bullingdon Club, famous for such delightful traditions as heavy drinking and smashing up restaurants.

Happy days are back for Boris!

Not entirely. Some suspect the next PM will inherit a "poisoned chalice", given that David Cameron has refused to invoke Article 50, triggering negotiations on terms for withdrawal from the EU.

Why has he not?

According to some reports, he told aides: "Why should I do all the hard s**t for someone else, only to hand it over to them on a plate?"

Is it possible Article 50 won't be invoked?

It's not completely impossible. Constitutional law nerds are in heaven.

Any other problems for Britain's next leader?

How about the reported surge in racist attacks across the country?

OK. There are reports of a surge in racist attacks across the country. Scots are agitating for another vote on independence. There are fears the Irish peace process may be imperilled. Some call it Britain's biggest political crisis since the Second World War, with currency and financial markets plunging, and companies talking about uprooting from the UK, further battering the world's fifth biggest economy.

There have been claims the post-vote currency plummet means it's now the sixth biggest economy in the world, behind France.

Yes. Tory MPs vote to select two candidates, with the leader chosen by the party membership. Gove has thrown his weight behind Johnson, and Chancellor George Osborne has ruled himself out, but Boris's chief rival is likely to be Theresa May, an accomplished home secretary and a relatively non-vocal supporter of remain. According to early polling, May stands a real chance.

The opposition must be licking their lips.

More like licking their wounds. No - wildly slashing open new wounds and stamping rock salt into them while howling incomprehensibly at the sky.

Jeremy Corbyn, the leftwing backbench rebel who swept to victory on a wave of membership support after the last election, faces a coup, with most of his shadow cabinet resigning and Labour MPs voting by 172 votes against to 40 in support in a no-confidence vote overnight.

They believe he was deliberately muted in his campaigning for Remain. And, perhaps more to the point, with a snap election likely to be called by a new prime minister, consider him unelectable.

Who will be the new Labour leader?

Could be Jeremy Corbyn. He has rebuffed his MPs' demands he resign and insists he'll fight any leadership contest, confident he can once again win majority support from the party membership, who elect the leader.

Jeepers. What a shambles.

What then is the government plan for post-EU Britain?

What is the plan?

There's no plan. The Leave camp don't have one. And as for the outgoing lot, see Cameron's thoughts on the "hard s**t", above.

OK, but Boris Johnson must have a plan?

Well, amid a sea of silence from senior Tories, Johnson wrote in his column for the Daily Telegraph on Tuesday that "British people will still be able to go and work in the EU; to live; to travel; to study; to buy homes and to settle down ... There will continue to be free trade, and access to the single market."

Hang on, what? He wants to join the EU?

No, silly. He continued: "The only change - and it will not come in any great rush - is that the UK will extricate itself from the EU's extraordinary and opaque system of legislation."

What is the EU likely to think of that?

It's a "pipe dream". There will be no "cherry picking".

In any case, wouldn't it mean immigration from Europe continued unchanged?

According to Boris, it is wrong that "those who voted Leave were mainly driven by anxieties about immigration".

The only discernible actual political leadership is coming from Scotland's first minister, Nicola Sturgeon. Except she wants Scotland in the EU. And out of Britain.

Eddie Jones for every job?