ANALYSIS - If, as analysts say, moves in media boardrooms in Australia could eventually lead to a merger of New Zealand's two biggest news publishers, what would it mean for us?

The rumour mill began to turn yesterday when The Australian newspaper reported Sydney-based APN News & Media would announce a split with its New Zealand arm, NZME, at its annual general meeting on Wednesday. 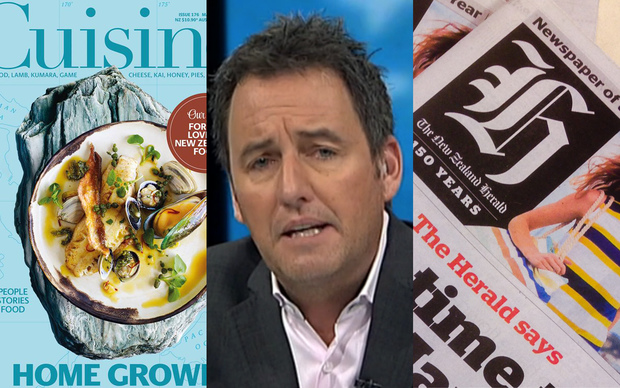 APN share trading was halted on the Australian Stock Exchange yesterday pending an announcement to the market due on Wednesday morning.

If Fairfax did separate out its New Zealand company, that firm could then be bought by another company , offered to investors or listed on the NZX. Fairfax said yesterday it was "exploring options" and no decisions had been taken which should be disclosed to the ASX.

So, APN News & Media's move may be more about what it wants to do in Australia, and the Fairfax spin-off may not happen soon - or at all - but The Australian does seem to know what goes on in Fairfax boardrooms in Australia. Last month it reported Fairfax Media was considering weekend-only publication of big city papers to cut costs. Fairfax denied it then, but confirmed last week it has weighed up the option.

In Australia, Fairfax Media's once-profitable papers are now losing money and it has few assets in broadcasting which bring in revenue. The New Zealand business generated about 20 per cent of Fairfax's $A1.8 billion revenue in the year to June. But first-half earnings were down 12 percent and advertising revenue fell by 9 percent. Online revenue was up, but that didn't offset the continuing decline in print advertising.

One local publisher to rule them all?

In its reporting of Fairfax and APN discussions about merging, The Australian said: "If this option was undertaken it would be via a two-step process, in which each company initially spun off their NZ businesses. The two separately listed entities would then have the option of merging."

Even though they are rivals for readers and advertising, NZME and Fairfax already co-operate on printing in New Zealand.

Both - along with Mediaworks and TVNZ - also run a joint agency called KPEX to attract more online advertising which is increasingly going to Facebook and Google.

In February, APN's chief executive said he had abandoned the idea of floating NZME and spoke of "more partnerships" between New Zealand's two big newspaper publishers.

What would happen next?

A merger of New Zealand's two dominant news publishers would mean the companies would no longer have to compete for shrinking advertising income while cutting costs.

The nzherald.co.nz and stuff.co.nz websites may be merged into one, which would either start charging readers for news or hike the price of advertising to an enlarged audience. It's also possible one website would be free and funded with ads while the other put premium content behind a paywall.

Some newspapers would almost certainly close, and hundreds of journalists and back room people would lose their jobs as two sets of staff became one. A smaller staff of journalists reporting national news would be competing only with reporters from the broadcasters.

Would it be blocked?

A single company could dominate the nation's newspaper and online news publishing - and corner the market for readers and advertisers. The Commerce Commission would have to approve it, and could deem such a move anti-competitive.

However, backers of a merged Fairfax and APN company could argue that in a converged, digital media environment they will be up against other media companies like TVNZ, Mediaworks and Sky TV.

Opponents argued a near-monopoly in pay TV would skew the market it it had a free-to-air channel too. The Commerce Commission found the acquisition "will not have, or would not be likely to have, the effect of substantially lessening competition in any of the affected markets".

Explaining what media companies are up against, TVNZ chief executive Kevin Kenrick told Mediawatch last week: "I don't lose any sleep worrying about competition from local media companies. The real competition is the big global players who have more cash in the bank than New Zealand's GDP. They could wipe us out in a heartbeat. That's what we've got to be focused on".