Former Deputy Prime Minister and New Zealand First leader Winston Peters says he will seek a judicial review of the decision to trespass him from Parliament. 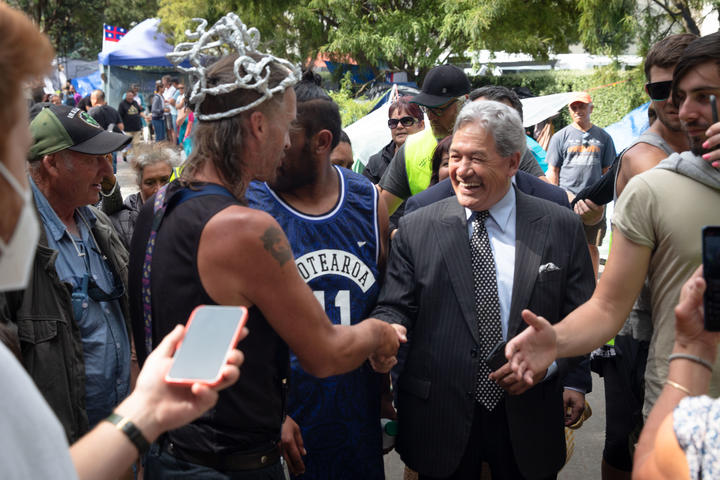 The New Zealand First leader is among several high-profile people who have been issued trespass notices for attending the 23-day occupation on Parliament's grounds in February and early March.

In a statement, Peters said he had decided to seek a judicial review of Mallard's decision to trespass him from Parliament grounds, after reviewing advice from his laywers.

"This is not about whether former Members of Parliament should be treated differently to others who were at the protest - they should not. This is about fairness, freedoms, democracy, and one law for all New Zealanders," he said.

"It is my intention to seek a precedent on behalf of the hundreds of others who were unreasonably and therefore unlawfully trespassed for peacefully protesting."

Peters yesterday revealed he had been trespassed from Parliament for two years.

Earlier he told Morning Report the trespass notice looked "so unreasonable and so unlawful" he initially believed it was a hoax.

"I thought it had to be it was so ridiculous," he said.

The trespass law was being abused and he intended to "take the best legal advice and take the Speaker (Trevor Mallard) on", he added.

"He cannot be allowed to get away with this dictatorial, fascist behaviour."

Those protesting at Parliament should have been spoken to, he said.

"If people were peacefully protesting, which is a fundamental right in our type of society - and critical to our society, whether you agree with it or not - they should have been heard."

He said the descent into "violence and criminality" which eventually occurred may have been avoided if somebody had spoken to the protesters.

"I'm trying to defend good people who lost everything they've ever worked for."

Protesters on Parliament grounds were warned several times on loudspeakers they were there illegally, after the Speaker closed the area to the public.

Police said at the time that those who could be identified as having been present at the occupation were likely to receive trespass notices.

Deputy Prime Minster Grant Robertson told Morning Report that decisions about how to deal with things that occurred on Parliament grounds were "entirely for the Speaker and the Parliamentary Service" to make.

He said the Prime Minister had encouraged Mallard to meet with members of all political parties to talk through the trespass process that was underway.

"Obviously there is a process to go through ... when trespass notices are issued, but the way that that's done is entirely up to the Speaker."

A cross-party meeting of MPs was called to discuss whether former members should be exempt from being issued trespass notices - the majority agreed they should not.

Peters agreed, telling Morning Report he did not believe former MPs should be given special treatment.

"The law should be applied equally to everyone. It should be the same law for everybody."

But he said he took issue with the "little narrow meeting" Mallard had called to discuss the issue.

"He decided what the discussion would be; he's meant to be Parliament's person but ... give him a cap, he thinks he's Hitler," Peters said.

He reaffirmed his lack of confidence in the Speaker, but acknowledged MPs should be treated the same as everyone else.

In addition to Peters, former National MP Matt King has been issued with a trespass notice for his attendance at the protest.

The Speaker said he was not prepared to comment on confidential discussions.