Firefighters have been struggling with their big ladder hoses breaking down, posing a danger to them and to being able to put out a fire. 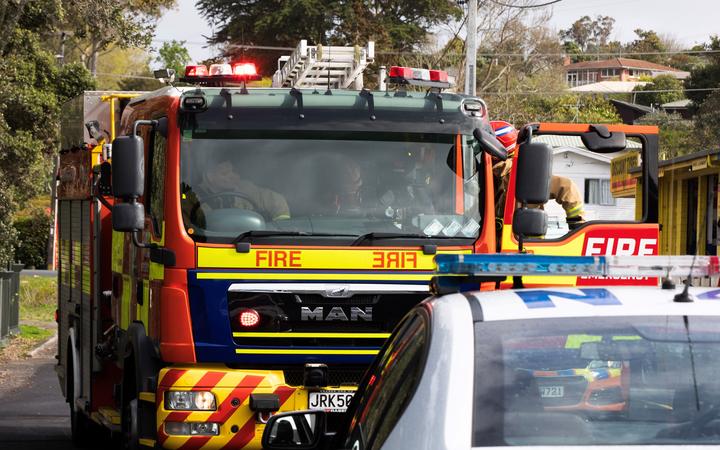 Fire and Emergency has an ageing fleet of large trucks that it has lacked an up to date replacement strategy for.

Internal FENZ reports released under the OIA show major breakdowns three times this year and once in 2019 on the country's 10 largest trucks, (called type 5 and 6 aerials).

A ladder basket was "thrown around" by an uncontrolled water jet, another basket came perilously close to live wires, and a "near miss" report from Bay of Plenty said "we may not be so lucky next time".

At one fire in Auckland, repairs or maintenance had left the city with just one large truck to send, and it "froze when setting up at fire".

In three out of the four cases, the risk was "high".

FENZ says aerial operators are trained to handle breakdowns, and backup trucks can be dispatched.

"We have processes in place for keeping our people safe at such incidents," it said.

The firefighters' union says the old fleet is in crisis.

The country's 10 large trucks average 20 years in age: The three oldest are back-ups or "relief" engines, but even the seven active aerials average 15 years old.

Auckland union secretary Martin Campbell said the difference with fleet here compared to other countries, was the lack of spare capacity to cope with gear failures - "there's no back-up plan", he said.

"They are just frantically playing catch-up all the time."

FENZ has been working on a replacement strategy for two years. It also aims to buy four new aerials to plug the gaps, but the international wait-list to get hold of them is long.

Staff said in a strategy review in August, released under the OIA, the agency had failed to do regular reviews and "one of the reasons we are in the current situation is because we have used the life of the appliances to govern the project life".

The incident reports showed ladder hoses, pumps or controls leaked, froze or failed at a Bay of Plenty fire and a Wellington fire in June this year, in Auckland in 2019 and in August this year.

At that most recent breakdown, firefighters at the top of the ladder in the attached basket on the country's largest truck.

It has two hose attachments in it.

The left hose could not be controlled because the wiring that governed the water jet had been incorrectly installed and got ripped out and they had to close down the left hose entirely.

The right hose attachment had such a "serious leak" that it was "spraying large amounts of water into the basket and across the aerial control unit".

That meant the firefighters could not see the fire.

A pump fault wiped out the throttle control and over-rode the dead-man switch in the basket that protects the firefighters from too much - or fluctuating - water pressure.

"The rapid increase in engine revs caused the basket to be thrown around by the jet reaction," the 1 August report said. That was considered dangerous.

"This had the potential to escalate if the fire had grown in size as we were not fully effective."

Emails show the truck's brakes had long-standing faults, too.

The Professional Firefighters' Union is in a running battle with FENZ over how to best to deploy the large aerials; the agency has ordered stations chiefs to limit what callouts they go to, partly to try to cut down on maintenance and repairs.

The April 2019 breakdown in Auckland showed the tensions.

"This was the only heavy aerial available in Auckland at the time," the station officer wrote.

After the basket did not level out as the ladder was being extended, the truck "shut itself down" and "could not be moved".

"For a period time both T5 and T4 [Type 5 and smaller Type 4] appliances were unable to fight the fire."

Luckily no one was in the basket. "I believe it would have been nearly impossible for operator to escape."

He asked for an investigation, saying, "all aerials need to be tested regularly and maintained to a very high standard to ensure safe operating".

The investigation into the Auckland international convention centre fire called over a year ago for an update of the old national aerial strategy.

How many trucks are required and how long their ladders need to be, is complicated by factors such as Auckland's growing population, the increase in medium-rise townhouse and apartment living, and climate-change issues.

Despite this, at governance level, FENZ's board has only considered aerials once in the last 18 months, minutes show.

That was last November, and was regarding the union "blacklisting" one of the South Island's oldest aerial trucks. It is a backup, bought from the UK when it was already old, expensively modified here, but hard to use - and now parked up in Christchurch.

The union told RNZ that doubts persisted the back-up truck could perform.

The Christchurch brigade recently got lucky; in the same week a big fire badly damaged the city's water treatment plant last month, they tackled another major fire at Antonio Hall - and the following week, their ladder truck was out of action for four days.

Chassis cracks and defects have also sidelined at least three-dozen Type 3 trucks, the workhorses of FENZ's smaller fleet that is also subject to a belated strategy review.

The annual report shows repair costs have not been confirmed, and legal action is looming between FENZ and a fire appliance engineer over who is responsible.

As for the bigger trucks, the third incident report, from Wellington's Newtown station in June this year, said the control box joystick for the big ladder failed completely.

"Subsequently, control of elevation and extension was lost ... whilst the appliance was in a vulnerable position," the station officer reported.

A day after this, the fourth and final report shows the Mt Maunganui brigade arrived at a fire only to find the aerial's pneumatic system that controls tanks and valves, wouldn't work.

The fire was not too bad but "we may not be so lucky next time", the report said.

FENZ said in a statement its staff are trained and its trucks have automatic safety features, such as manual overrides, in event of a breakdown.

Incident controllers could call in other trucks.

"The trucks referred to in these incident reports were either fixed on-site or sent to a service provider to be repaired," it told RNZ.

Firefighter union representatives told RNZ there was a lack of focus on large aerials because they are not called out all the time.

"But at the time you need an aerial, nothing else will do," one said.

Some firefighters say FENZ has spent too little money at the coalface and too much on building its bureaucracy in Wellington, and on rebranding itself from the Fire Service.

It has spent $6.5m since 2017 on new designs, signs, improved uniforms and PPE, using the FENZ logo.

The number of career firefighters hovers around 1850-1900, while the agency's back-office numbers have bounced from over a thousand, down to 870 last year, then back up to 993 now.

It spent a little less on key managers this year - $4.9m - and trimmed its executive leadership team from seven to six.

FENZ is in the final stages of amalgamating 24 urban and 18 rural fire districts into 17 districts with unified management.