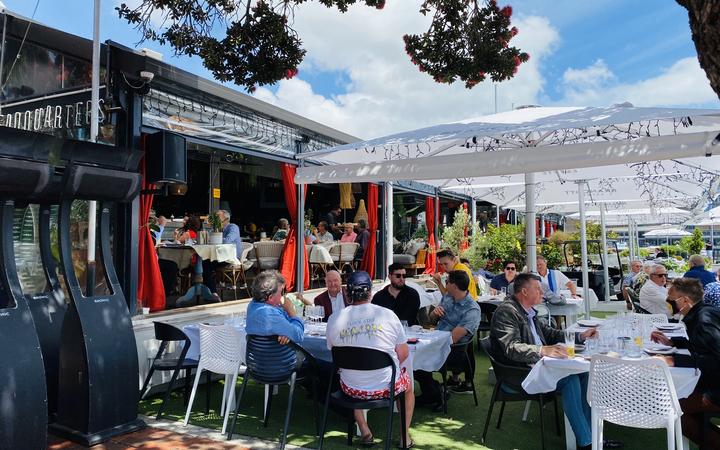 Cabinet will today review its Covid-19 traffic light settings to see if any of the areas in red can open up a little more to orange, with vaccination rates a key factor.

It would be the last change before the Christmas period, with the levels in place until 17 January.

Ninety-two percent of Aucklanders were double-vaxxed, one of the highest rates in the country.

But Professor Jackson said it was still too early to go orange which allowed bigger gatherings for vaccinated and unvaccinated people.

The city was already very open under red, he said.

"I don't think it matters for Auckland to wait because there is not a lot of difference between red and orange if you're vaccinated."

The government should stay cautious while there was an active outbreak, especially because the impact of going to red 10 days ago may not be fully seen in the case numbers, he said.

An example of what could happen is seen across the tasman in New South Wales, where cases are once again rising, he told Morning Report.

"I think the simple answer is that if we loosen restrictions more, we're going to end up going up again by the end of the year.

"As soon as it starts going up, you have to start putting in controls.

"I just looked at 20 countries' trends before this interview and 18 out 20 are going up ... so most countries around the world are re-introducing restrictions. So we're in a position where our cases are low, if we can keep them by going cautiously, we may not need to introduce any more restrictions."

Co-leader Sue Crengle said it would like to see Cabinet hold off on its decision for a couple of days.

There was a slight increase in cases to 103 yesterday after two days of double digits.

Because that was after weekend testing where numbers tended to be lower. It would be better to have a few days and more data before making a final call, she said.

Both professors Crengle and Jackson wanted to see the other red areas - Northland and a large swathe across the middle of the North Island - stay red too.

Professor Crengle said those communities, particularly Māori ones, still had rates that were too low even if they were improving.

"I do believe the rates will come up but, just to give them time to do that, it may be that staying in the protection of red will give them that opportunity."

And she urged people to respect the wishes of areas which were were asking Aucklanders, or unvaccinated Aucklanders, to stay away.

Professor Jackson said the unvaccinated areas of the country became the most at risk in the country as people started to move around for the holidays.

"What if their families in Auckland take Covid home for Christmas?" he said.

The push to get everyone vaccinated must continue, he said.

"This decade is going to be the decade of vaccination, it's the only thing that's going to get us back to any semblance of normal."

University of Otago professor of epidemiology Dr Michael Baker said there was a good basis for a shift to orange in Auckland, perhaps next week, with case numbers in Auckland and the rolling seven-day average of cases across the country trending down.

But it was still very early days in the traffic light system, he said.

"It's going to take at least another week to see how these levels settle down, particularly in Auckland," Baker told First Up.

"I think it would be very hard to change the levels this week, but potentially next week."

He expected the government would this afternoon flag a shift to orange for Auckland, and could even signal a change for the end of the week.

The new reality was there would be cases all across New Zealand, but rising vaccination levels, the contact-tracing system, and health measures and vaccine mandates in the traffic light system offered some protection.

It was too soon for the South Island to move into green, and this should be reassessed mid-January, Baker said.