The new traffic light system for managing Covid-19 came in today with Auckland going into the red setting and the city reopening after more than 100 days in lockdown. 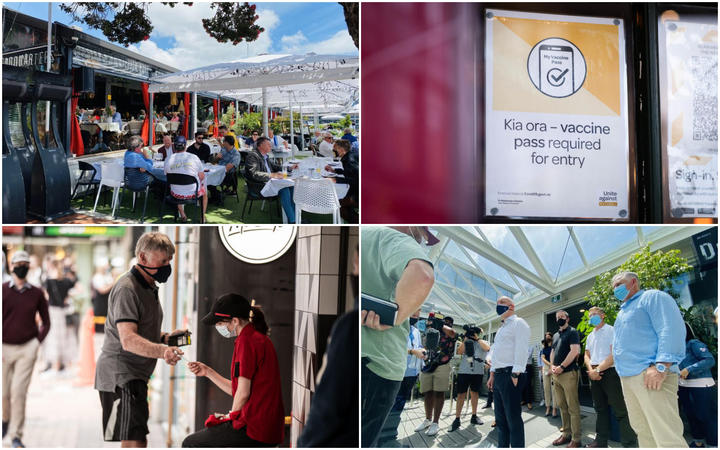 Joining Auckland in red were Northland, Taupō, Rotorua Lakes, Kawerau, Whakatāne, Ōpōtiki, Gisborne, Wairoa, Rangitīkei, Whanganui and Ruapehu districts. The rest of the North Island and the whole of the South Island went into orange.

Vaccine passes also came in today and are valid for six months from their issue date.

Auckland diners told Checkpoint they were enjoying the return of some normality.

"Great to be back around good friends and nice atmosphere and people in business," said one of the diners at Auckland's Soul Bar.

But restaurateurs said the vaccine pass checking process and limit on the number of diners under red traffic light meant that it was not just business as usual.

Commercial and events manager Olivia Carter said it was great to be back open but although Soul Bar and Bistro looked like it was pumping, that was only the outside area due to the restriction on numbers under red.

A cafe owner said although it was good for customers to be able to come inside for a coffee, the Auckland CBD was still really quiet with many still working from home.

Later in the day, it was announced that 90 percent of the eligible population in Auckland is now fully vaccinated.

Wellington went into the orange setting and so there were no limits on the number of people at cafes and restaurants provided customers were able to show they had a vaccination certificate.

A worker at Frank's Cafe on the Terrace in the Wellington CBD said the new system had been working well.

Some Northland businesses are refusing to stop serving unvaccinated customers, instead adapting the new traffic light framework to serve everyone.

The region has moved into the red light setting and is the least vaccinated in the country and is still 6500 off being 90 percent partially vaccinated.

Kara Hosznyak from Whangārei cafe Hello Pickle shut not long after opening today, feeling deeply uncomfortable about the use of vaccine passes.

She said they realised that people were feeling a bit ostracised by the move.

She briefly closed the cafe and rearranged the cafe to allow takeaways through the cafe's window.

The new leader of the National Party Christopher Luxon is questioning the government's call to put Auckland into the red setting under the traffic light system.

Luxon said the city should have gone to the green setting, as the red light is for when the health system is overwhelmed and vaccination rates are low - neither of which is happening in Auckland.

He said Auckland hospitality businesses are worried about the city emptying over the summer and being hit again in the pocket.

The country's courts have said they need more time to set up infrastructure to operate under the traffic light system.

Chief Justice Dame Helen Winkelmann said transitional protocols will be in place until the end of January, so systems to check vaccine passes and carry out rapid antigen tests can be set up.

Meanwhile councils around the country have been making decisions on requirements to access their facilities, whether in red or orange traffic light settings.

Gisborne mayor Rehette Stoltz said every council received information from government but also had the opportunity to do its own assessment.

Tens of thousands of people who have had trouble obtaining a vaccine certificate have been issued a temporary pass, as the Ministry of Health struggles to keep up with processing demands.

Hundreds of people who have received two vaccine doses are yet to even apply for the pass.

Intensive care units and hospitals are getting a boost of hundreds of millions of dollars as the country moves to the Covid-19 traffic light system.

Minister of Health Andrew Little announced this morning the government would spend $100 million upgrading buildings and facilities and $544m for operating costs, including staffing to prepare for when Covid was widespread in the community next year.

He said he had asked hospitals to identify ways of quickly increasing their intensive care beds - even though there was more than enough capacity than was likely to be needed.

"But as the country shifts to the traffic light system, we need to make sure we can cope with the unexpected," he said.

But there are fears from health professionals that the government's sudden boost in hospital funding to prepare for Covid-19 cases is overly-ambitious so late into the pandemic.

There were 92 new community cases of Covid-19 reported in New Zealand today, the first time case numbers have dipped below three figures in more than five weeks.

The last time the daily total was below 100 was on 28 October, when 89 cases were recorded.

Today there were 80 cases recorded in Auckland, two in Waikato, one in Northland, five in Bay of Plenty, one in Lakes DHB, one in Nelson-Marlborough and two in Taranaki.

There are 79 people with Covid-19 in hospital, with four still being assessed and nine in intensive care.

Nelson health officials are working to determine the cause of the outbreak there, with a total of 14 cases of the virus in Nelson and Tasman. All are in isolation or quarantine.

Two new Covid-19 cases were reported in the Wairoa region by Hawke's Bay District Health Board on Friday evening.

The DHB said the cases were low risk as they were already isolating at home.