The clock is ticking for the government to get children aged five to 11 vaccinated against Covid-19. 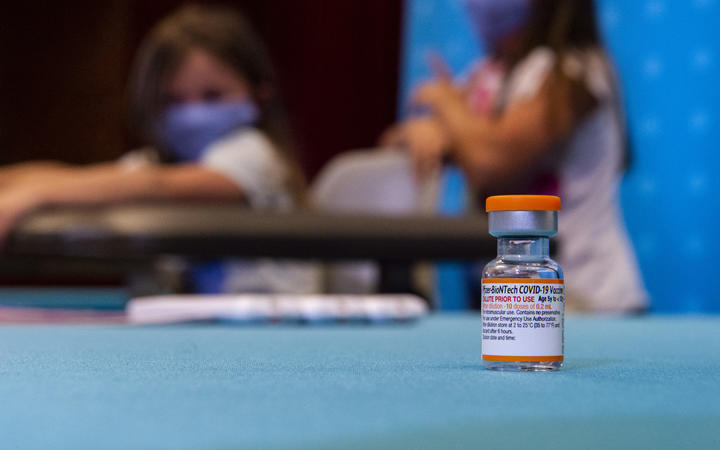 Covid-19 Response Minister Chris Hipkins said yesterday he expected advice from Medsafe in a couple of weeks and the rollout should start in late January.

But some are urging officials to move faster as a number of schools shut down for days because of infected students or staff.

Director-General of Health Ashley Bloomfield said while there were no plans at this stage to bring the timeframe forward, it was still under advice.

Martyn was anxious because he wanted his 10-year-old daughter to be safe at school. She had underlying health conditions and was at high-risk of becoming seriously ill if she caught Covid-19.

Martyn wants his daughter, and the other kids at her school, fully vaccinated before the 2022 year starts, so beginning the rollout in late January was not good enough.

"The school year is end of January, early February. From all the information we're being fed by the government about how the first dose takes a period of time of time to be partially effective, and you factor that into the timetable that's been announced, it just doesn't work," he said.

"There's certainly no option for a second dose in there for paediatric groups."

Instead, Martyn had been left with more questions.

"Is there going to be, like in the rest of the general population, a priority or high-risk groups if we can't get through the whole school population by the start of term?"

Pakuranga Heights School in Auckland closed for almost a week last month after a pupil tested positive for the virus.

Principal Fintan Kelly is keen on children being vaccinated but said the end of January did not give schools much time to prepare.

"What would be really useful is really clear guidance from the Ministry of Education, and Health, in terms of their expectations."

Kelly "absolutely" wanted that guidance as soon as possible.

"Schools are definitely in planning mode for 2022 right now."

He thought there was some sense to vaccinations happening at school.

But he warned immunising thousands of children would undoubtedly be disruptive to the school day.

"First and foremost we need to go about keeping people safe, and if getting children vaccinated is the best way to keep them safe then the education sector will be adaptable and we'll deal with the disruption."

Immunology professor and Mallaghan Institute director Graham Le Gros said children needed to be vaccinated because there could be "quite serious consequences" if the virus was allowed to "run riot".

He said "for an immunologist", a late January rollout was "not soon enough when we've got a virus knocking on our door".

"We just need to get rid of it and protect against it so as soon as possible please authorities; Medsafe and the government."

Director-General of Health Ashley Bloomfield told Morning Report the reason the rollout would be in January was because vaccination teams would want a bit of break over summer and Christmas, and whānau also were generally on holiday outside their usual place of residence.

"To deliver the programme safely, we need the vaccine available. It's a different formulation so people need to be trained to use it," Bloomfield said.

"And we need to then make sure the programme is ready to roll out. One thing I would say is we have enough vaccination on order to do this entire 5 to 11 year group and every indication that we will be able to get the vaccine."

There were no plans so far to pull the timeframe forward for the vaccination of children, he said.

"As we're seeing in Europe, the really critical time to have the population at full immunity, including our children if that goes ahead, and our boosters, is going into winter."

Schools were also being looked at as a potential place for children to get their vaccine, he said.

"That may be using the school days to vaccinate children but it's more likely we will use the schools as a place where people can bring their children along."