Police are confident they can get most of their 900 unvaccinated staff "over the line" before a mandate kicks in next year. 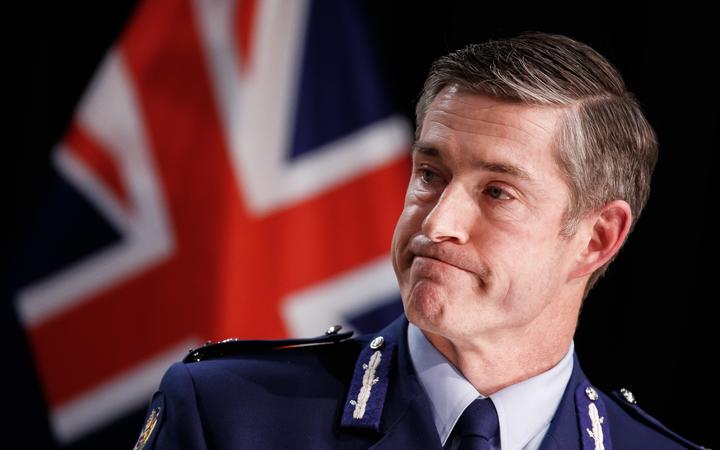 Andrew Coster says he respects that there are diverse views on the Covid-19 vaccine within the police force. Photo: POOL / Stuff / Robert Kitchin

It was announced today that all police and Defence Force workers will be required to be vaccinated as part of the Covid-19 traffic light system.

This will cover sworn members, recruits and authorised officers of the police and all Defence Force staff.

First doses of the vaccine for these workers are required by 17 January and second doses by 1 March.

So far, 92 percent of all constabulary police staff have received at least one dose, and 86 percent are fully vaccinated.

There are around 11,000 staff in the police and about 900 are not vaccinated, Police Commissioner Andrew Coster told Checkpoint.

He said the views of those not vaccinated are diverse, and officers are "representative of the community they police".

"We respect that there are a bunch of different views on this.

"Some I believe will choose the alternative vaccine option," Coster said. But he said the mandate will help management get more accurate information.

Those who are yet to line up for a vaccine would be given time to think about their options, perhaps by taking leave without pay while they get any information they need and decide if they will change their stance.

"We'll do our best to keep people on board. It's not my desire to lose anyone as a result of this policy."

There are some roles that do not require contact with the public but not a large enough number to accommodate a large number of deployments, Coster said.

Asked how police would cope if 900 people didn't get vaccinated, he said he has no reason to believe that would be the situation.

"We recruit about 1000 people a year and we have some ability to increase that... We do have the ability to redeploy away from some duties. It is absolutely not my desire to do that. I don't think that will be necessary.

"But ultimately we have to get this in place and I'm confident that we will be able to get a very large proportion of our people over the line."

Policing the Auckland border is "resource intensive", he said, and while some staff would be involved in making spot checks after the border opens on 15 December he expected fewer staff would be needed for checking travellers' vaccinations and tests.

"The planning is going on around that and we will clarify that in time."

He said generally officers support making vaccines mandatory for staff, as they often work with unvaccinated people "up close and personal" and sometimes in situations where protective equipment can be displaced.

"A vaccination provides a much higher assurance that we can keep our people safe."

He said it was still early days on judging the staff response to the mandate but he has already observed that most staff want to work alongside others who are vaccinated although a few want to make their own decision.