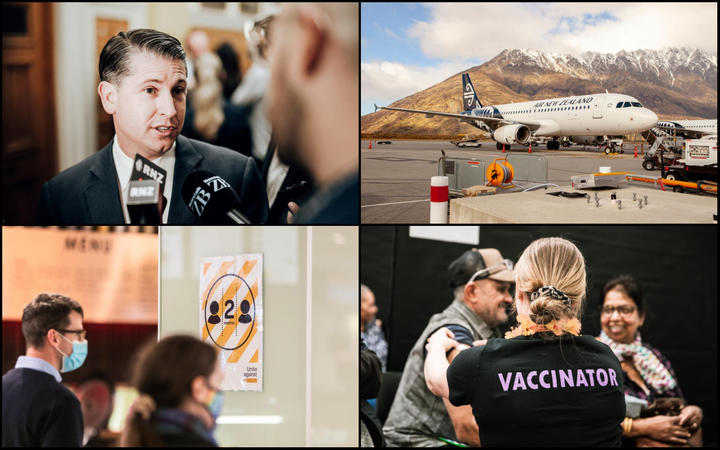 In a statement, it also said a person had died from Covid-19 in Auckland City Hospital. The patient was in their 50s and was admitted to hospital on 17 November.

Meanwhile, there are 88 people in hospital including six in ICU.

Of the new cases today, 196 were in Auckland, 11 in Waikato, four in Northland, one in Bay of Plenty, two in Lakes and one in MidCentral that was announced yesterday.

There are three cases at the border, including one historical case.

The number of active cases being managed is 6450.

Workplace Relations and Safety Minister Michael Wood today announced a new tool to help businesses assess whether they should be requiring workers to be vaccinated.

He said the assessment tool will be available from mid-December.

Wood said when the traffic light system comes into place from 3 December, it will be a requirement for vaccine passes to be shown for those businesses that opt into it.

"And it'll be a requirement for all workers in those workplaces to comply and to be vaccinated by that date - have their first dose by that date."

"This will be a very simple tool to use," Wood said.

He said the tool provides a clear legal framework to help businesses and other employers to decide about vaccinations in the workplace.

It builds on guidance and advice from WorkSafe, public health agencies, Business New Zealand and the Council of Trade Unions.

It has four criteria, at least three of which must be met before a business can require vaccination:

Businesses that opt in or are required to use the passes, but those which fail to enforce them, are set to face penalties which are being increased from $300 to $12,000 for a company, or $15,000 for a court-imposed fine for a company.

These fines also apply in other areas where vaccines are mandated, including for teachers, frontline health workers and border workers.

Wood said with 91 percent of eligible New Zealanders having already had their first dose, the vast majority of New Zealanders are already on board and have been vaccinated, and will not be affected.

As of 10.30am today, more than 1,470,000 requests for a My Vaccine Pass had been processed, according to the Ministry of Health.

The government is expected to reveal more information for businesses, including sector-specific advice, throughout the week.

The announcement has been met with mixed reactions, with many labelling the government's communication of the shift as confusing.

Auckland Business Chamber chief executive Michael Barnett said it was great to have a firm date, but many businesses still had questions about the next phase.

The government needed to provide clear information to business owners on the rules and how to enforce them, he said.

Māori Party co-leader Debbie Ngarewa-Packer said the government had done a poor job of communicating the changes to the public.

"It's really, really difficult to get your head around," Ngarewa-Packer said.

"Who is on the ground monitoring and ensuring compliance? Who's doing it all? It actually raises a whole lot of questions."

She said people in Covid-19-free areas wanted an assurance the rules would be enforced to prevent spread.

He said he wanted answers over what exactly would trigger a shift between risk settings for various regions; from red to orange to green. The government has signalled it will reveal those details on Monday.

The DHB said about 10,800 second doses were needed to reach the 90 percent fully vaccinated mark.

On the basis of current figures, it expects to reach it around 19 December.

The three demographics with the lowest uptake in the DHB remain people under 24, males aged 40 to 55, and Māori under 55.

The Ministry of Health today announced dialysis patients were now eligible to get the booster Pfizer vaccine, due to being immunocompromised.

New recommendations have been released on the Ministry of Health website determining who is eligible to receive a third shot.

In October, a third primary dose of the vaccine was recommended for people who are severely immunocompromised because they are at higher risk of severe outcomes from Covid-19.

Government figures show no double-vaccinated travellers from Australia have tested positive for Covid-19 in managed isolation since the end of August.

Now, the National Party has called on the Government to open the Trans-Tasman bubble for fully vaccinated travellers in time for Christmas.

In response to questions from National in the House today, Covid-19 Response Minister Chris Hipkins said between the 23 August and 15 November, 2544 people travelled to New Zealand from Australia.

Hipkins said only three of those people had tested positive for Covid-19 in MIQ - but all were unvaccinated.

While National push for a re-opening of the trans-Tasman bubble, others are focused on the revival of domestic tourism.

Boult said the domestic travel the traffic light system allows will be a shot in the arm tourism operators need.

"At this stage we're ready, we're focused and we're good to go."

Most operators have been doing everything they can to retain key staff and have spent the downtime on training and upgrades, he said.

The protected area of Te Urewera has been closed to visitors since the move to Covid-19 alert level 4 in August, but unlike Auckland, it won't be opening back up to the public until late January.

The region is home to Tūhoe and includes some of Aotearoa's most remote, and most vulnerable communities.

Reliable vaccine uptake data is scarce, but tribal leaders estimated just 40 percent of the eligible Te Urewera population have received at least one dose of the Covid vaccine.

Part of the problem is that the communities are not hooked into the 1pm briefings, instead relying on leaders to explain Covid-19 updates, Te Urewera Board and Tūhoe Tribal Authority chair Tāmati Kruger told Morning Report.

"There's also the distrust by some people of the vaccine, the growing pains of the Tūhoe-Crown relationship that moving from 170 years of distrust and indifference to something a little bit better, a friendship that's going to take some time.

With the nearest hospital a two-hour drive away, the Tūhoe iwi authority said it had invested in a system of quarantine that runs like MIQ.