Brian Tamaki, the controversial Destiny Church leader, has been remanded on bail again, after denying charges that he breached the law and his previously imposed bail conditions by attending a protest at the weekend. 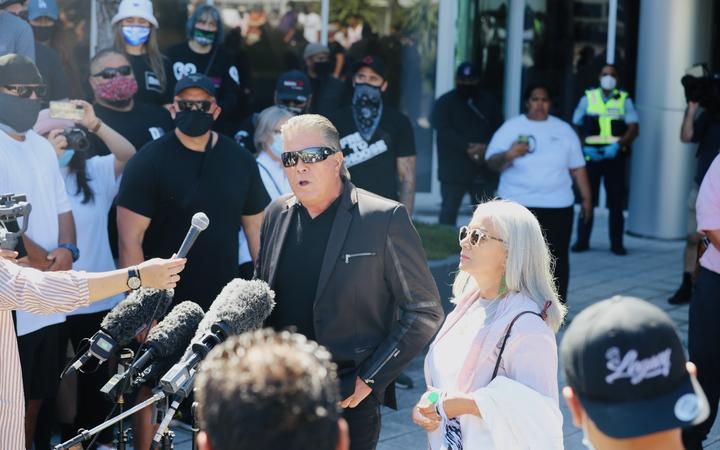 Tamaki, who said Christians should not fear the virus, and that it was a sign the world has "strayed from God", told supporters today he has not been vaccinated and supports the freedom to choose.

He has now been charged three times after speaking at large protests in breach of Auckland's level three rules. At the time of the first event, gatherings were restricted to a maximum of 10 people, and now 25 people. There were around 1000 people at the protests.

At his last court hearing the judge warned him any breach of his bail conditions - such as going to a protest - would put him "in peril" of being held in custody.

On Saturday he spoke at another one, again at the Auckland Domain.

This afternoon he appeared in the Auckland District Court before Judge Stephen Bonnar.

Tamaki, through his lawyer Ron Mansfield QC, denied charges of failing to comply with an order under the Covid-19 Public Health Response Act and breaching his bail conditions.

He told Tamaki he was "skating on thin ice".

"I want to make it abundantly clear to you Mr Tamaki: if we have this situation arise again, it is extremely possible that you will remain in custody until the matters can be properly determined," Judge Bonnar said.

"I do not want there to be any misunderstanding."

Tamaki has another court date set down for January.

Judge Bonnar reimposed previous bail conditions, and imposed one further bail condition: that Tamaki not attend or go to the Auckland Domain at all until a further order of the court.

Existing bail conditions include that he not organise, attend, support or speak at any protest gathering in breach of any Covid-19 public health order requirements. He must also not access the internet for the purpose of doing this.

Arguments heard in a bail hearing cannot be reported by the media - only the decision, and if bail is granted, any conditions imposed.

This morning Brian and his wife, Hannah, who was also charged but did not appear in court today, were summoned to the Auckland Central Police Station.

Before going in, Brian Tamaki spoke to supporters outside.

"It's a bit unfortunate and sad that we have to end up today at the central police station in Auckland, trying to defend myself which I am basically innocent, I'm quite relaxed today because I've done nothing wrong."

Tamaki said everyone at Saturday's gathering complied with legal restrictions, and the MC of the event regularly reminded people to adhere to them.

He said he is not opposed to vaccinations, but neither he nor Hannah have had a Covid-19 shot.

Police say the pair were charged this morning after they were arrested in relation to the Auckland Domain gathering on Saturday.

Superintendent Shanan Gray, relieving Auckland City District Commander said police have not ruled out further arrests being made in relation to Saturday's event.