Householders face losing over a billion dollars worth of sunlight and views under radical housing intensification law changes. 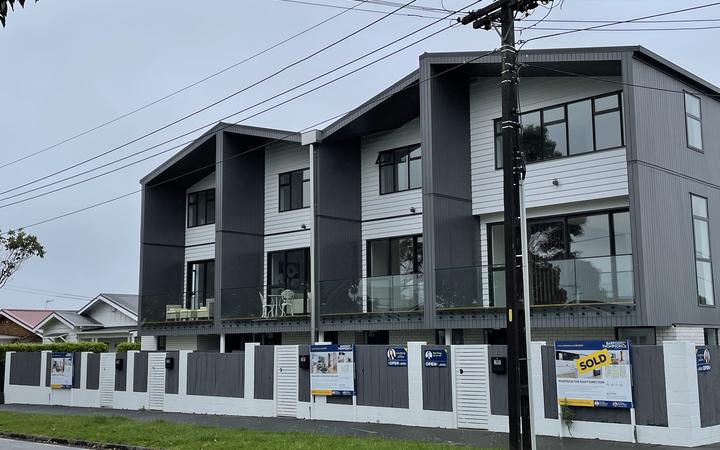 The new housing intensification bill will let new homes of three-storeys like these in Auckland be built almost up to the fenceline. Photo: Bill McKay

A cost-benefit analysis done by PwC for the government puts a price tag on changes to sunlight and views under the housing intensification bill, which allows new homes of three-storeys to be built almost up to the fenceline.

Many planners are panning it.

A pricing tool called Icarus invented by the Sense Partners for the bill has been used for the first time to put a price on the impact of more shade and less view.

The lower combined estimated cost is $650 million nationwide, and the higher is $1.3 billion, with the price of lost sun slightly higher than for lost views.

This represents just 10s of thousands of dollars lost from the market value of each house affected, however, the impact on people's lives from the lack of sunshine is being described as an impending "disaster". 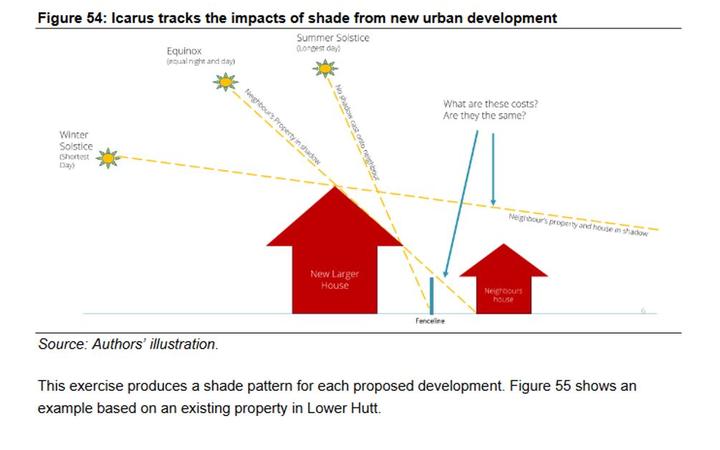 "There is nothing in New Zealand legislation which safeguards the amount of sunlight a property receives post-construction," either for the new house or the existing neighbours, she wrote.

"The proposal certainly has a lot of potential to lead to existing suburban properties having almost no direct sunlight over the winter months, say from April to August," Tindale told RNZ.

The bill would override the existing planning controls used to protect households' sunlight - for instance, Auckland's height in relation to boundary rules - for the 14 councils they apply to. These cover most of the urban population.

These councils could no longer stop people building up to 12m high (an 11m structure that allows for a roof peaking at 12m) just 3m from a boundary, and almost 8m high a metre away. The changes would let tall housing be built a metre from all boundaries except the front.

Leading Wellington urban designer Graeme McIndoe was grim in his submission to the Parliamentary select committee that is running fast-tracked hearings on the bill.

"It will have a significant change to all of the standards and controls that currently apply," McIndoe told RNZ.

"I think it would be an urban disaster.

"There's a real risk that there'll be extremely poor quality development, which down the track the effects of that in terms of the community, the population, neighbours and so on, will be so dire, that it will head towards the scope of a leaky building crisis where things have to be rectified."

Shading would be "severe" in the suburbs when tall terrace housing or the like took out the sun to the north, he said.

The irony was he had helped Auckland Council put in daylight protections in 2015, demonstrating that a city could have both intensification and sunlight, he said. He outlined an "alternative" in his submission showing how three storeys could fit on two typical lots.

But although the new bill clearly drew on Auckland's rules, it had stripped out the sunlight protections, McIndoe said.

Auckland planner Simon O'Connor suggested that move was purely political - to the detriment of planning.

"There was a Ministry for the Environment webinar last week, and the staff at the MFE said that it was the elected members, the MPs', decision ... because they wanted to enable three-story dwellings close to the boundary," O'Connor said.

"They have not considered what is over the fence. This just causes massive shade on properties."

O'Connor cited a large section near Helensville - 4500 square metres - where instead of six homes, they might soon be able to squeeze on 40 terraced houses close enough to "high-five" from the balconies.

The MFE had let its professional planning colleagues like himself down by not pushing back at the MPs, he said.

"National and Labour have both got a terrible track record on housing delivery. And they're getting together here so they can't be blamed.

"But effectively they're collectively going to get blamed for this."

Cross-party assurances the bill had enough protections, such as a 50 percent maximum site coverage, were not convincing, O'Connor said.

"[National MP] Nicola Willis came out and said how people shouldn't be scared. [But] people should be fearful of this."

The Association for Resource Management Practitioners warned the bill gave too much power to individual property owners versus the community.

The association's Dr Douglas Fairgray said neighbours would get no say before their sun or view was taken, despite having factored in the view and based their decision to buy the home in part on rules that enshrined community participation in the resource consenting process.

"It's an important matter of fairness," Fairgray said.

Tindale said councils had historically put a lot of store on protecting daylight.

Just how far this was tipping the other way could be seen in that even a six-storey building - of the scale set to be allowed near shops and transport hubs - might now appear to have few effects on neighbours, she said.

New Zealand should look to Australian states that were guaranteeing every household, new or existing, at least two hours sunlight a day, she added.

The Icarus model unsurprisingly calculates the heaviest cost burden from lost sun and views, by two thirds, will fall on Aucklanders.

But overall the government report concludes the benefits of the bill strongly outweigh the costs by two and half to one.