The government says it is in talks with businesses about the switch from the wage subsidy to transitional payments when the traffic light system starts, and Māori fear the worst as the Auckland border reopening nears.

Here's a wrap of what happened today. 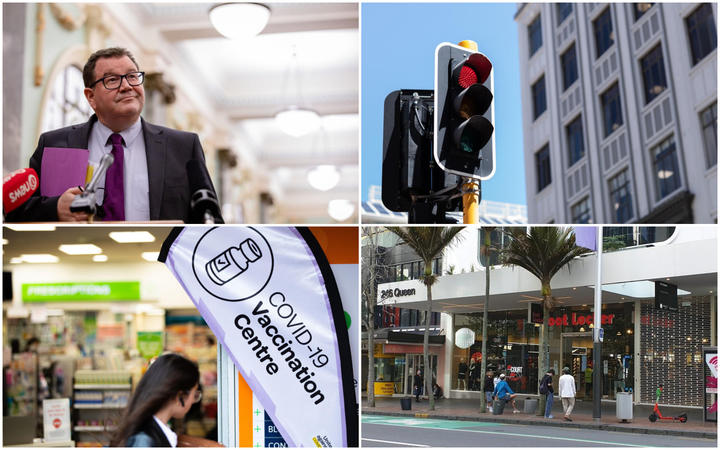 Deputy Prime Minister Grant Robertson has spent the day visiting business and hospitality workers as well as a medical centre during his first trip to Auckland since the city went into lockdown.

His meetings in the supercity come four weeks ahead of Auckland's border reopening.

There was a high degree of frustration in the city, he said.

"And there is now a clear pathway and plan for Auckland."

Robertson said the wage subsidy scheme had always been linked to alert level 3 and the move to the traffic light system would mean a shift.

"We announced on 22 October that there would be a transitional payment when the framework starts. We're just finalising that now."

An application has been made to the Waitangi Tribunal calling for an urgent inquiry into the government's pandemic response for Māori.

It was filed by the Māori Council and other leaders, who say the Crown's Covid-19 framework significantly and irreversibly prejudices Māori.

The Green Party says Māori will die as a result of the decision to open up Auckland's borders while vaccination rates are still low.

Covid-19 Response Minister Chris Hipkins says the country cannot wait for every person to be vaccinated but the Greens' Covid-19 spokesperson Elizabeth Kerekere says the move will have tragic consequences.

Northland iwi collective Te Kahu o Taonui spokesperson Haami Piripi told Checkpoint the suggestion to "send body bags" to Northland if the Auckland border reopens is based on what the science is saying about Delta.

Haami said the "principle of our objection" to reopening the Auckland border to Northland was ignored by the Ministry of Health.

He said they were racing to bring the Māori vaccination rate up to 90 percent double-dosed, but were being thwarted by issues like not being given data on unvaccinated Māori by the ministry.

Covid-19 is continuing to spread through the North Island.

Of the 167 new cases reported today, 25 are outside Auckland.

The two reported from Bay of Plenty follow several detections of the virus in wastewater over the past week. There was one new case is in Mt Maunganui and the other in Tauranga.

Waikato has 17 more cases, and two new ones in the MidCentral DHB rohe - one in Ashhurst and the other in Levin - have taken the total there to four. Both are likely to be linked to known cases.

And Northland's five new cases are all linked. Two are in Dargaville, and there's one each in Whangārei, the Far North and Kaikohe.

Wairarapa DHB is the eighth DHB to reach the 90 percent first dose milestone.

Auckland DHB is just over 1000 doses away from reaching 90 percent fully vaccinated.

Two more people have died of Covid-19. That brings the number of deaths from the virus since last Saturday to five.

The latest two to die were a woman in her 80s and a man in his 90s, both of whom were in hospital in Auckland.

Four other deaths of Covid-infected people over the past fortnight are still being investigated.

Several major summer events in Christchurch have been cancelled because of Covid-19 uncertainty, including the city's annual New Year's Eve party.

The organisers of the Bread and Circus World Buskers Festival, which had been set to run from 14 to 30 January, have postponed the event until the Easter school holidays.

And Wellington Pride Festival's been pushed back six months to next September.