A woman in Managed Isolation and Quarantine (MIQ) denied the chance to hold a bedside vigil for her dying sister is begging officials to reconsider, after she was automatically classified as "high risk". 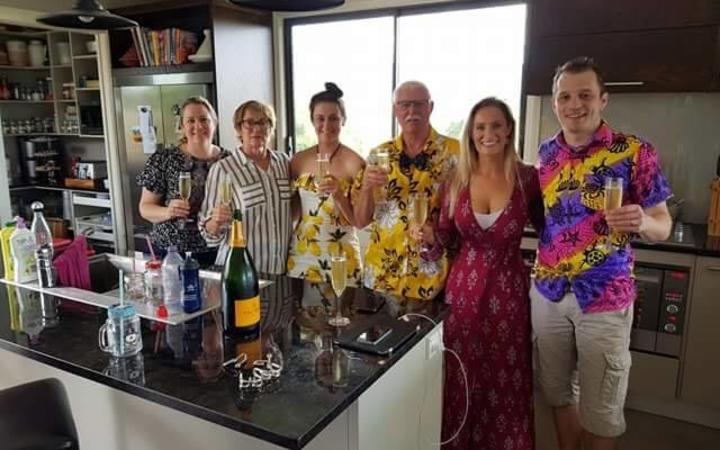 Rebecca Spoerl is on the far left and her sister Shelley Grierson second from right. Photo: Supplied

Shelley Grierson is double vaccinated, has tested negative multiple times and has been working from home in the UK countryside, but was told she scored too highly on a public health risk assessment to make a trip out of her MIQ hotel.

Her sister Rebecca was diagnosed with leukaemia and treated last year, but suddenly went downhill and was given "days, at most weeks" to live last week, Grierson said.

Grierson immediately applied to travel to New Zealand and enter MIQ on emergency grounds, with a letter from her sister's doctor and a negative pre-departure test.

Officials gave her provisional acceptance and she booked a flight that evening, but said she missed it waiting for MIQ to send full confirmation.

Grierson managed to get on a flight the next day, and then applied for an exemption to exit her MIQ hotel in Auckland and visit her sister.

She said it was "gut-wrenching" to recieve an email declining her application - stopping her from doing what she had travelled here to do.

She feared she would only get out of MIQ when it was too late.

"To see her... it would mean everything to my sister, to her husband, to her, two children, to my parents, to my other sister," she said.

"Ms Grierson's application was declined because when applying the tool, she is from a high-risk country," King aid.

"There has been a recent change to the public health risk assessment tool provided by the Ministry of Health to allow for travellers from low risk countries to apply for earlier release than previously. But, given the now shortened period of MIQ to seven days, returnees from high-risk countries cannot be considered for exemption."

Grierson contested - she would be seeing her sister from a distance, and not interacting with the public - and said her living circumstances in the UK made her a very low risk.

"I mean, I've provided like full vaccination certificates for Pfizer vaccine, negative test results. I'm sitting here and I don't even have Covid. It's frustrating and yet outside, New Zealand citizens that do have Covid are allowed to self isolate at home.

"I think quite frankly, I'm scared of catching Covid from the New Zealand public instead of the other way around. I can't give my sister anything - like even in her presence, they'll have to wear a mask and the rest of it."

But the statement said MIQ decision-makers have no ability to override risk assessments.

"Exemptions from managed isolation are approved in very few circumstances - the threshold for approval is very high. Most exemptions are granted for people to join unaccompanied minors, people in transit, or people whose medical needs require hospital-level care."