Christchurch residents are on tenterhooks as they head into the weekend with four cases of Covid-19 in the community. 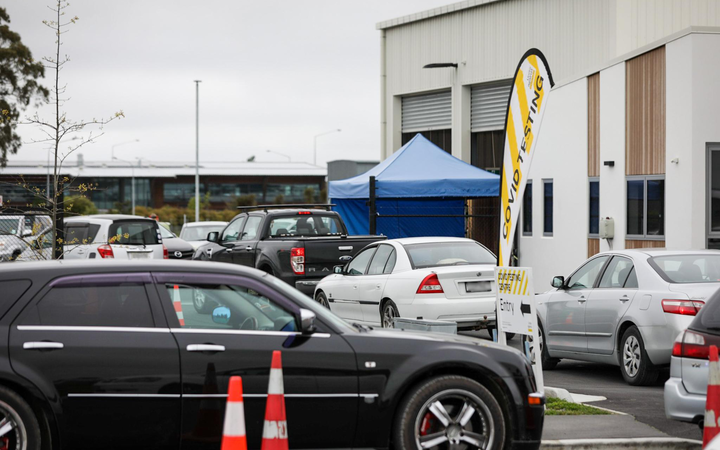 There are four cases in Christchurch and 13 close contacts isolating, one of them linked to a primary school in Spreydon.

Uncertainty hangs over the city - cars are still rolling up in big numbers to testing stations and more than 3000 swabs were taken yesterday.

Canterbury Chamber of Commerce chief executive Leeann Watson said everyone was on edge, and cancellations were rolling in.

"There's just too much uncertainty and the risks around the financial risks and the repetitional risks for a lot of these sorts of situations are just too high," she says.

"So, it does make it really, really hard to plan forward.

She said retailers were following the rules to a tee, because they knew what another snap lockdown would mean for them.

"If we can continue to get our vaccination rates up, and we don't see widespread, let's hope that we can stay at alert level 2," she said.

"We know that any escalation in those alert levels has a significant impact across our business community and our community as a whole, not only economically, but mentally as well.

"This is a really challenging time for people, and the uncertainty just creates increased anxiety for everyone."

Several locations of interest have been identified and closed for deep cleaning, including Ken's Takeaways in Bishopdale.

One of the original cases went there on Wednesday night, while awaiting their test result.

Lion Brewery's Hornby warehouse is in a similar situation after one of the cases, a truck driver, delivered bulk goods there.

A spokesperson said the warehouse, which was managed by MOVE Logistics & Warehousing, would reopen next Monday.

"The truck driver is not a MOVE or Lion employee. He has not been delivering to Lion customers, stores or venues.

"MOVE are following official guidelines with the site closed for deep cleaning and staff are being tested."

The central city bus station was added to the locations of interest this afternoon.

The region's now just a whisker away from 90 percent having had their first Pfizer dose, with second doses sitting at 71 percent.

And with less than two weeks before the Addington Cup and Show week begins, raceway manager Darrin Williams has his fingers crossed nothing else changes.

The raceway's already had to shut off its famed Cup and Show week to crowds this year - and the 20,000 spectators it can draw in will have to watch the races on the big screen instead.

"Timing-wise by next Tuesday, a week out, things get really busy and really awkward to try and change," he said.

He said plans were in place to hold the event under level 3 restrictions if that happened.

And an upshot of the Fashion in the Field moving online is that it's been a welcome distraction for some Aucklanders, still under level 3 conditions.

"Some of them go into great lengths with some of the stuff they're posting online," he said.

"I saw one online yesterday with someone that actually got a horse, a real horse, wearing a fascinator and it looked like it was professionally shot by a cameraman.

"We're really pleased with the feedback there and hopefully we will be with the punters club on the day as well."

Cantabrians head into the weekend hoping the case count doesn't creep up - and level 2 is as high as it goes.