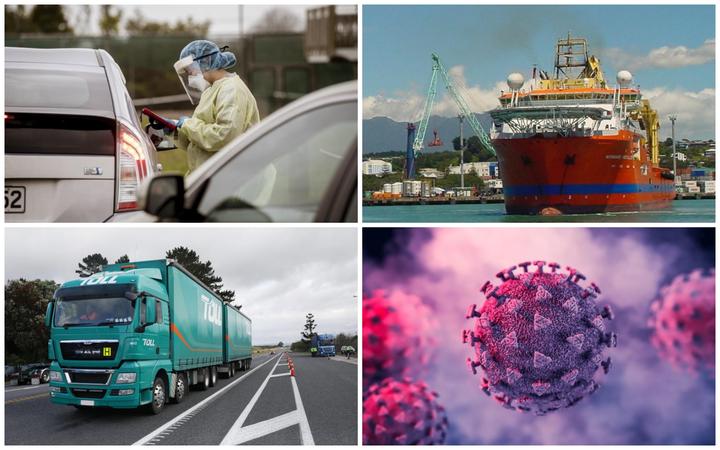 There were 125 new Covid-19 cases in the community today, including two new cases in Christchurch, the Ministry of Health reported.

There was no Covid-19 media conference today. In a statement, the ministry said the two Christchurch cases were expected and related community cases, both from a single household linked to the cases identified earlier this week.

The Ministry said 13 close contacts of the four Canterbury cases were isolating and would undergo further testing. While Covid-19 was detected in a Christchurch wastewater sample taken on Wednesday.

There was also one new case in Northland and four in Waikato, with the remaining 118 in Auckland. Three of the Waikato cases are still to be linked, but the Northland case was not unexpected, as they are a household member of a case and were already isolating.

Fifty-one of the new cases are still to be linked. There have been 289 unlinked cases in the past 14 days.

There were also three new cases and one historical case identified at the border.

There are 39 people in hospital with the coronavirus, including four in intensive care.

One of the new Auckland cases was a resident at Edmonton Meadows retirement village in Henderson.

The ministry said they are confident the risk of infection is low but, as a precaution, testing is being arranged for all staff and residents.

Trucking companies have pushed back against a vaccine mandate at regional borders saying it would exacerbate the issues facing the industry, including a driver shortage and fragile supply chain.

The government is looking at making vaccination a requirement to cross regional boundaries for all but some travel.

Transporting forum chief executive Nick Leggett said the sector could not afford to take unvaccinated drivers off the road.

"We have a shortage of drivers and a shortage of people in the overall freight industry. We've got issues with ships being able to call at our ports," he said.

"We are compromised and a compulsory vaccine requirement at borders I think would cause significant disruption and slow our economy even further at a time when we can't afford it."

Anyone leaving Auckland for essential reasons must return a negative Covid-19 test in the seven days before they cross the border.

But the testing regime did not catch an unvaccinated person who later returned a positive result for the virus in Christchurch following a visit to Auckland - and now there are calls for vaccination to be a requirement for anyone leaving the region.

Leggett said drivers did not pose a great risk of transferring Covid-19 to other people.

A recent survey of 300 transport operators showed 28 percent would not have enough truckies to run their business if a vaccine mandate was introduced, Leggett said.

Two new cases in a south Kaipara household have not yet been linked to the current Northland cluster.

In a statement, the Health Ministry said the two cases are in the same household and do not have any known links to the current Northland cluster. Investigations are underway.

The two new cases will bring the number of confirmed cases of Covid-19 in Northland to 10.

The ministry said the pair were tested on Wednesday and have been isolating with public health involvement.

"Investigations are continuing to determine further details around their movements and to identify any locations of interest. A further update on will be provided tomorrow.

"We are encouraging anyone in the area who has symptoms to get a test."

There was one new Northland case reported earlier today but the case was not unexpected - they are a household member of a case and were already isolating.

The Ministry of Health said it was investigating reports in Tongan media of a positive Covid-19 result from a person who boarded a commercial flight to Tonga from Christchurch on Wednesday.

"The case returned a negative pre-departure test before leaving New Zealand. They are fully vaccinated with the Pfizer BioNTech vaccine and had their second dose on 15 October.

"They were tested in routine Day 0 testing yesterday and returned a positive result today."

The Ministry and the Ministry of Foreign Affairs and Trade, is working with Tongan officials to confirm the case.

More than 1000 fake vaccination bookings have hampered efforts to get people jabbed in Tairāwhiti, the region with the lowest Covid-19 vaccination rates.

In the area including Gisborne and the East Cape, just 77 percent of people have had their first dose of the vaccine, and only 62 percent have had their second jab. Both rates are the lowest rate in the country for a region.

Health authorities have been working hard to drive up vaccination rates in Tairāwhiti.

Di Akurangi, a communications advisor for the local DHB Hauora Tairāwhiti, said it was a surprise to see a surge of 1300 bookings recently and then a shock to see that they were all fakes.

"Look I had to laugh about it because I'm thinking 'oh gee, our comms are really working here in Tairāwhiti', on the other hand I'm thinking 'oh no, our team's now got to go through a process to delete all of those and that's a process in itself too that the Ministry of Health actually assists with so, definitely time wasting."

She said to manage the problem, staff were keeping a close eye on the bookings as they came through.

She said the Book My Vaccine system was easy to manipulate - her practice received a booking with an obvious anti-vax first and last name.

She said they had to throw out vaccines for people that did not show up - and that was a waste.

People spoken to around Ōtautahi last night expressed a mixture of confusion and anger at news Covid had re-appeared in their community for the first time in almost a year.

On Thursday Prime Minister Jacinda Ardern announced the virus was contained and there was no need for the city to move to level 3.

Part of the rationale for the decision was high vaccination rates in Bishopdale, the suburb where the infected couple live.

But one of them had travelled to parts of the city with a much lower uptake of the vaccine.

Dave Brown owned the Pannell dairy in Wainoni in the city's east, which as of Thursday night was one of 13 locations of interest spread right across the city.

He found out the person had visited his store through the media and when RNZ spoke to him, had yet to hear from health authorities.

"Well it would it be nice to know what we have to do from here on, whether we can continue trading or we shut down."

While his staff were all double vaccinated, one of them was immune compromised.

A stark reminder of just how vulnerable this part of Christchurch was to an outbreak was provided by a customer of the Pannell dairy spoken to by RNZ, Cherie Shipton.

The courier driver said news a positive case had visited the same place as her, made her nervous.

"[It's] motivating me to go get the vaccinations, so might look into that now. Yeah, [I'm] just not even 100 percent sure if I should get it [the vaccine]. So I'm 50-50. But yeah, I want to go back into the bars and restaurants so I probably have to get it."

Meanwhile Covid continued to creep south, with a worker at Macraes mine in Otago being named by their employer, Oceana Gold, as a close contact of the couple late on Thursday.

A Taranaki shipping agent is fuming that an injured seafarer has been unable to get medical treatment in New Plymouth over Covid-19 fears and instead arrangements are being made to fly him back to India.

The man fell while working on the Panama-flagged tanker Esteem Energy travelling between Lyttelton and Port Taranaki, injuring his back.

Phoenix Shipping represents the tanker in New Plymouth and managing director Billy Preston said it appeared the man had a nasty fall.

"The captain's advised us one of the crew has slipped over and hurt his back and he requires an x-ray. He's sent us a photo of the man's back and there's quite a big scar on there, so it's evident that he actually has had an accident."

Preston said under current Covid-19 protocols the man would normally have had a phone consultation with a GP or private health provider - in this case Medicross Urgent Care and GP Clinic in New Plymouth - and it would then be decided whether he would need to see a doctor.

Preston said he had used Medicross for similar cases for more than a year, but this time the clinic refused to be involved.

He believed it was because of Covid-19 fears, despite the Esteem Energy crew all returning negative tests before leaving Australia.

Medicross did not answer RNZ's questions, but practice manager Jamie Litt said: "We followed our approved protocols that are in place for dealing with patients in this situation."

"We have been working with the shipping agent to assess his condition and whether hospital treatment is required, however, no medical assessment will be undertaken in Taranaki as the mariner is to be transported to an MIQ facility in Auckland."

Campbell said the man was now being considered part of a crew change, had an approved travel plan to transfer to Auckland and would then be returning overseas.