University of Canterbury Covid-19 modeller professor Michael Plank says with infection rates on the rise, it's no time to loosen restrictions. 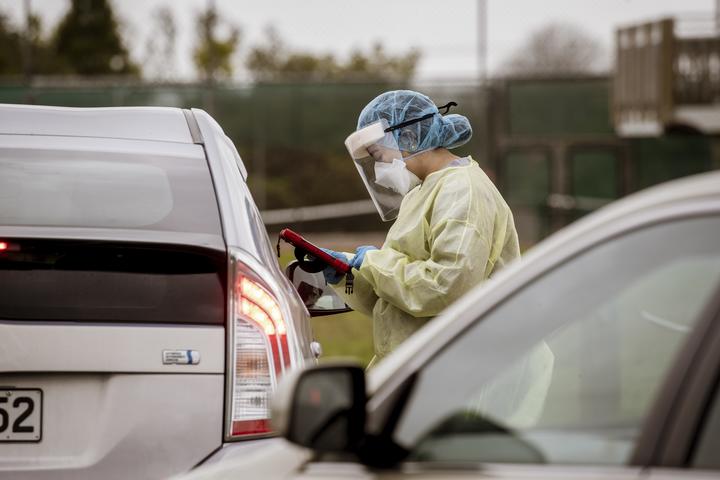 A resident getting tested at a pop-up testing centre in the South Auckland suburb of Clover Park Photo: STUFF/ David White

He said case numbers could spiral out of control.

He told Morning Report Auckland could face further restrictions if case numbers follow the trend of yesterday's jump in numbers.

"If at the moment the strategy is to keep case numbers under control until the vaccine rollout turns the tide and starts to bring that R number down then that's okay as long as we see case numbers either steady or trending up gradually is okay.

"But if we start to see big increases then it will certainly be time to think about tightening restrictions."

Plank said the reproductive (R) value of the virus in the outbreak has grown by 20-30 percent since Auckland moved to alert level 3.

R is the number of people that one infected person will pass on a virus to, on average.

"It's difficult to pin it down to one single cause but certainly the shift to level three has increased the R number somewhat and obviously we've seen an increase in the number of mystery cases which I think is a reflection of that as well."

"If we start to see cases climbing steeply that will be a sign that the R number has increased too much ... even if cases were doubling every eight days which is what we'd expect if the R number was about 1.5 that would very quickly lead to an enormous number of cases and the number of people that would require hospital treatment would put an immense strain on our healthcare system."

He said the government need to implement all the measures they can to control the regional spread of the virus.

"I think we need to do everything we can to limit the regional spread of the virus because of course we know that there are parts of the country that have very low vaccination rates and if the virus gets into those communities it could be devastating."

Plank said implementing rapid antigen testing for those crossing the Auckland border would be an effective measure to limit the spread of the virus.

He said the tests could also be used for those flying regionally or travelling between the North and South Island.