Fire and Emergency has yet to plug a gap over who should test for toxic smoke and warn the public. 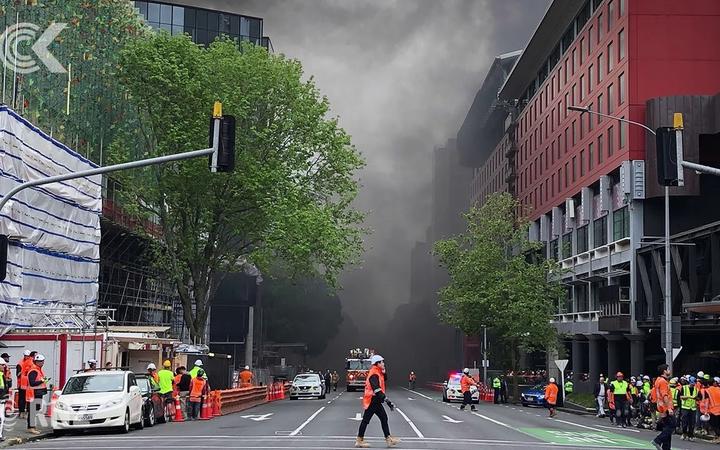 Flames engulfed the top of the building in October 2019 resulting in black smoke spreading throughout Auckland CBD. Photo: RNZ / YouTube

Fire and Emergency NZ (Fenz) has yet to plug a gap over who should test for toxic smoke and warn the public.

The gap came to light in investigations into the SkyCity International Convention Centre two years ago.

Black toxic smoke flooded central Auckland, closing businesses, getting into air conditioning systems "causing health concerns and requiring the evacuation of the SkyCity Hotel", the inquiry a year ago found.

"Many streets in central Auckland were filled with dense smoke.

The inquiry warned it remained unclear who should measure air quality, and issue public warnings at any fire, big or small.

It suggested - in the eighth of its 10 recommendations - that Fenz clear this up.

Fenz said it was still working on it.

"We have prioritised our work and are at the planning stage ... seeking confirmation from government about responsibility and accountability for atmospheric monitoring."

Monitoring is not one of its jobs as laid out in law.

But Fenz said it did work with public health units to keep people safe from smoke.

The uncertainty caused a gap, the convention centre inquiry said.

"It was stated to us that the local council is responsible for monitoring air quality.

"Regardless of that, the public may have an expectation that the fire service would have an understanding and appreciation of whether smoke being generated from a fire incident was toxic or not."

Fire crews had to be protected too, it said.

Fenz is bringing in air-purifying respirators but they can only be used when the smoke is not so bad that it demands full breathing apparatus.

Since it would have to check the air quality to determine this, perhaps with handheld monitors, "there may be a synergy here with broader community needs" - though handheld monitors were not suitable for more general atmospheric monitoring, the inquiry said.

"We work with public health units to provide for public safety from smoke at incidents via the appropriate use of public safety messaging, cordons and exclusion zones, shelter in place orders and evacuations."

As for asbestos, a new protocol set up by WorkSafe required public health units to do air monitoring for it at a fire, if they chose, Fenz said.

"WorkSafe has advised us there are no expectations of Fire and Emergency carrying out atmospheric monitoring at incidents involving asbestos."

Asbestos was not a factor at the convention centre fire.