A year on from the massive SkyCity fire in central Auckland the rebuild is underway and starting to show new signs of life, with a new air bridge lifted into place. 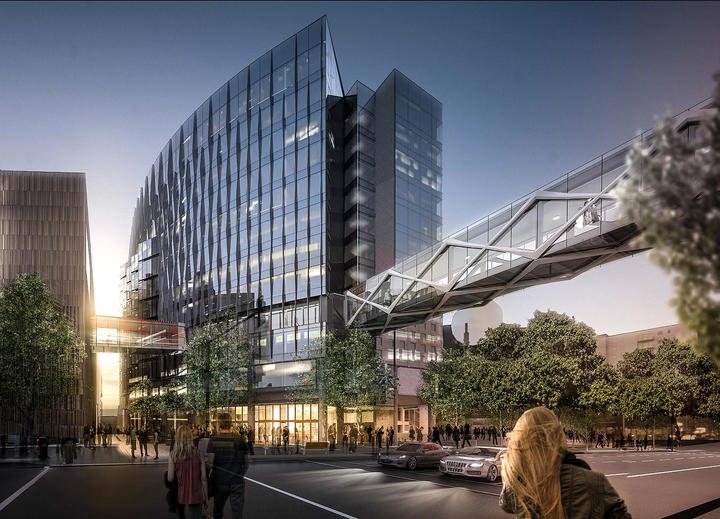 An artist's impression of the air bridge that has been lifted into place at the Auckland International Convention Centre. Photo: Supplied.

The 30 metre long bridge that now sits across Hobson Street sits about 11m above ground level, and will link the New Zealand International Convention Centre's hotel with the SkyCity Hotel on the opposite side.

It's one of the first notable signs of rejuvenation at the site.

More than 150 firefighters battled the blaze that took hold on 22 October last year, when roofing membrane was being laid at the under- construction SkyCity International Convention Centre.

Hundreds of people were evacuated from buildings nearby, and central city streets surrounding the site were closed for days. The fire was found to be accidental.

In a press release Fletcher Construction said two mobile cranes were needed to lift the 85-tonne bridge into place on Saturday morning, while streets were closed.

"It's a positive step forward for the project, for our client SkyCity and for the dedicated team working on it ," said project director Grant Beckett.

The bridge was built near Palmerston North, then trucked to Auckland.

"Due to its size and weight, the structure could only be transported at night. After a three-day journey, it made a spectacular entrance into Auckland on 17 September, flanked by a flotilla of pilot vehicles," Beckett said.

"Its glass facade, other cladding elements and roofing material were added ahead of the lift. A reinforced concrete floor will be cast once the bridge is installed."