The South Island has been hit by a cold blast - bringing snow to parts of the lower South Island and Canterbury. 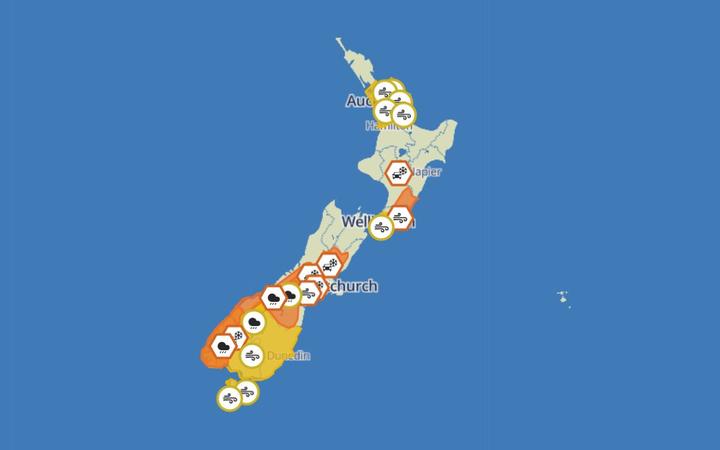 The heaviest snow was in Fiordland and Southland, with snow down to about 200 metres, and there are snow warnings for many of the South Island's mountain passes.

Snow also started falling at around 10.30am in Oxford in Canterbury.

Snow could also fall down to 600 metres on Banks Peninsula.

Road snowfall warnings are in place for Arthur's Pass, Porter's Pass and Lewis Pass in the Canterbury region.

Metservice warns winds could damage trees, powerlines and unsecured structures, while driving may be hazardous.

Strong winds are forecast to continue in the region until Friday before the area is hit with heavy rain over the weekend.

At the the bottom of the South Island, a heavy rain warning is in place for the Milford area with 150 to 180mm of rain expected with the worst to come Thursday night and early Friday morning.

In the North Island, a strong wind warning is in place for the Wairarapa region, with gusts reaching 130 km/h in exposed places. The region is expected to face strong winds throughout the weekend.

In the centre of the island, snow showers are expected to affect the Desert Road this evening, where 1 to 2cm of snow may settle near the summit.

The weather in Auckland is expected to clear up overnight but a wet weekend in lockdown is forecast with rain returning on Friday and sticking around until Sunday.