The number of new community Covid-19 cases dropped to 53 today, while 37 people are in hospital with the virus including two who are in a stable condition in intensive care. 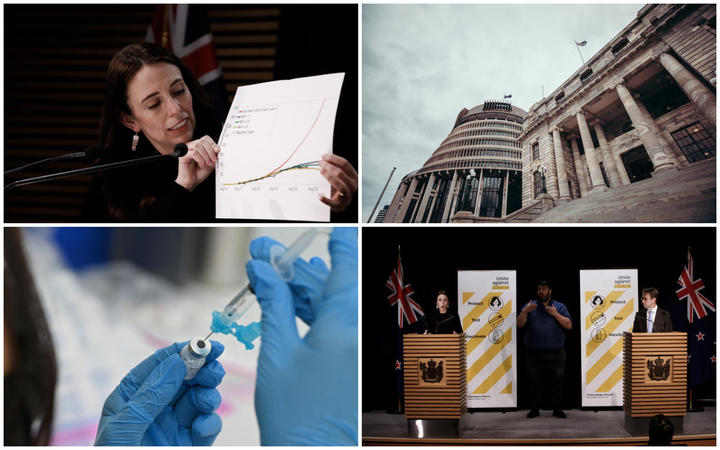 There were 53 new Covid-19 cases in the community today, all in Auckland.

There are 522 cases that have been clearly epidemiologically-linked to another case or sub-cluster, and a further 42 for which links are yet to be fully established, the ministry said.

"There are appropriate isolation and infection prevention and control plans in place at all hospitals where these patients are being managed," the ministry said.

There are also two recovered community cases in Auckland and one other case in a MIQ facility that has now recovered, bringing the total number of active cases being managed in New Zealand to 603.

Yesterday, 16,370 Covid-19 tests were processed across the country.

The ministry said testing centres in Auckland had another busy day yesterday with around 15,000 swabs taken across Auckland - around 10,500 at community testing centres and around 4,500 at general practice and urgent care clinics.

Meanwhile, 47,897 vaccines were administered yesterday. Of these 36,476 were first doses and 11,421 were second doses. This is a record for a Sunday, the ministry said.

Cabinet ministers are meeting today to decide the next steps for Auckland and Northland as experts call for tighter restrictions at alert levels 3 and 4.

Over the weekend, 165 new cases of Covid-19 were announced in connection to the Delta outbreak - 82 on Saturday and 83 on Sunday.

Cabinet has confirmed all of New Zealand south of Auckland will move to level 3 from 11.59pm on Tuesday night. Prime Minister Jacinda Ardern said this will be for at least a week, to be reviewed at Cabinet next week.

Northland will likely join the rest of the country at alert level three from 11:59pm on Thursday, Ardern said.

Cabinet has also confirmed Auckland will remain at alert level four until 14 September. Cabinet will consider next steps for the region on 13 September.

"The job is not yet done and we do need to keep going."

Auckland Mayor Phil Goff said that most Aucklanders, while not liking the extension of alert level 4 in the city, would understand the necessity for it.

"The delta variant is highly contagious and spreads rapidly," he said.

"We know from Sydney's experience that unless lockdowns are swiftly implemented, are strong and well supported, the pandemic quickly gets out of control.

"We all want to get back to life as normal as quickly as possible, but for that to happen the lockdown has to stay in place until the spread of the virus has been suppressed.

For Auckland and Northland, Ardern said the cases in Warkworth were found late in the lockdown and were not equivalent to the cases in Wellington, where cases were monitored and did not appear to have spread.

"We just haven't had that level of time for the cases we're concerned about in Warkworth, and with possible contacts beyond. Once we have that same level of reassurance in Northland we feel safe to move alert levels.

She said the government is awaiting test results from wastewater in Northland, and tests from people who were at locations of interest. If they all came back clear Northland could move to alert level 3 at 11.59 pm on Thursday.

"Just an indication here if all those tests come back clear," she said.

Ardern said if New Zealand had not moved into alert level 4, estimates of the number of new cases today could have been about 550.

Last week, it was decided that Te Tai Tokerau would be kept at alert level 4 with Tāmaki Makaurau when restrictions ease for most of the country at midnight tomorrow.

That disappointed many in the north, where there have been no community cases.

The government decided to keep Northland at a higher alert level because of one case detected in Warkworth - which falls in the northernmost part of Auckland - but Cabinet indicated Northland will move to alert level 3 on Tuesday if no new cases are identified.

Prior to this afternoon's decision, Whangārei mayor Sheryl Mai said Northland was on tenterhooks.

"Most of our fingers are crossed that the decision will be made to revert us from Wednesday along with the rest of the country, we believe that's the right decision."

"In an ideal world, the government will make a very clear decision about Northland, it would go to level 3 this week."

Officials were looking at ways Northlanders could travel south if they had a lower alert level than Auckland, he said.

"Absolutely it's practical. It's just merely a matter of putting the machinery in place to allow that to happen, and it's being worked on as I understand it, right now."

The Covid-19 Vaccine Independent Safety Monitoring Board believes a woman's death may have been caused by myocarditis, a rare side effect of the Pfizer vaccine.

It is being treated as the first case in New Zealand where a death in the days after vaccination has been linked to the Pfizer Covid-19 vaccine.

In a statement, the Ministry of Health (MOH) said the board noted that there were other medical issues occurring at the same time which may have influenced the outcome following vaccination.

The case has been referred to the coroner, who is investigating. The cause of death has not yet been determined.

Myocarditis is an inflammation of the heart muscle, which can reduce the heart's ability to pump blood around the body and cause rapid or abnormal heart rhythms.

The ministry said the benefits of vaccination with the Pfizer Covid-19 vaccine continued to "greatly outweigh the risk of of both Covid-19 infection and vaccine side effects, including myocarditis".

No need for passports or ID for anyone at vaccination centres

The Bay of Plenty District Health Board yesterday apologised for wrongly requesting passports from Pacific people in line for a Covid-19 vaccine.

While there's no requirement to show ID to get a vaccine, some members of the Pasifika community say they were asked to produce their passports to get a vaccine in Bay of Plenty.

The DHB said requiring a passport as identification is not policy or a requirement to be vaccinated.

It says it is committed to ensuring this does not happen again.

Minister for Pacific Peoples Aupito William Sio said it appears to have been an isolated incident, but should never have happened.

He says it caused distress and hurt within the Pacific community.

''I'll accept that this is a one-off but it does result in a loss of trust and confidence in the system. The CEO has apologised to the Pacific community. I want to make sure that everybody knows that there is no requirement whatsoever and we can just move on.''

Prime Minister Jacinda Ardern said health professionals go through a process to ensure people are being given their dose and can be given a second one, but "there are ways we can do that without any ID".

"We just want you to be vaccinated, so being physically here, is enough. Nothing more."

Police say they are pleased with the public's overall compliance with level 4 restrictions over the weekend but have discovered people hunting, on their way to buy a puppy, trying to get 'better quality meat' and more.

"By and large New Zealanders continue to recognise the importance of these restrictions for the health and wellbeing of us all," Police Commissioner Andrew Coster said in a statement.

"Now is not the time to throw caution to the wind or take unnecessary risks. Police will not tolerate behaviour that deliberately jeopardises everyone's efforts to date."

Coster said the rules are clear and we all know them by now, so the public can expect a move from education to enforcement measures more quickly.

Dunedin police are reminding people a lack of preferred chips at the local supermarket is not a reason to travel outside your neighbourhood, as dozens flouted lockdown rules over the weekend.

Police set up several checkpoints around the city over the weekend and, at many, found traffic volumes were similar to usual numbers expected pre-pandemic.

Senior Sergeant Craig Dinnissen said the majority of those breaching lockdown rules were receptive to police's education-first approach, although infringement notices were issued to some who refused to get on board.

Boredom, visits to family and friends, or just the desire to get out for a drive were among the most common excuses given to officers, he said.

Others told officers they were driving from one side of town to the other to find their preference for snacks.

Meanwhile, police have made a number of arrests in Waikato after uncovering firearms, cash and drugs as officers carried out lockdown compliance vehicle stops.