Prime Minister Jacinda Ardern says if the country had not moved into lockdown, daily case numbers could have been around 550.

Cabinet has confirmed all of New Zealand south of Auckland will move to level 3 from 11.59pm on Tuesday night. Ardern says this will be for at least a week, to be reviewed at Cabinet next week.

Northland will likely join the rest of the country at alert level three from 11:59pm on Thursday, Ardern says.

Cabinet has also confirmed Auckland will remain at alert level four until 14 September. Cabinet will consider next steps for the region on 13 September.

"The job is not yet done and we do need to keep going."

For Auckland and Northland, Ardern says the cases in Warkworth were found late in the lockdown and were not equivalent to the cases in Wellington, where cases were monitored and did not appear to have spread.

"We just haven't had that level of time for the cases we're concerned about in Warkworth, and with possible contacts beyond. Once we have that same level of reassurance in Northland we feel safe to move alert levels.

She says the government is awaiting test results from wastewater in Northland, and tests from people who were at locations of interest. If they all came back clear Northland could move to alert level 3 at 11.59 pm on Thursday.

"Just an indication here if all those tests come back clear," she says.

Ardern says if New Zealand had not moved into alert level 4, estimates of the number of new cases today could have been about 550. 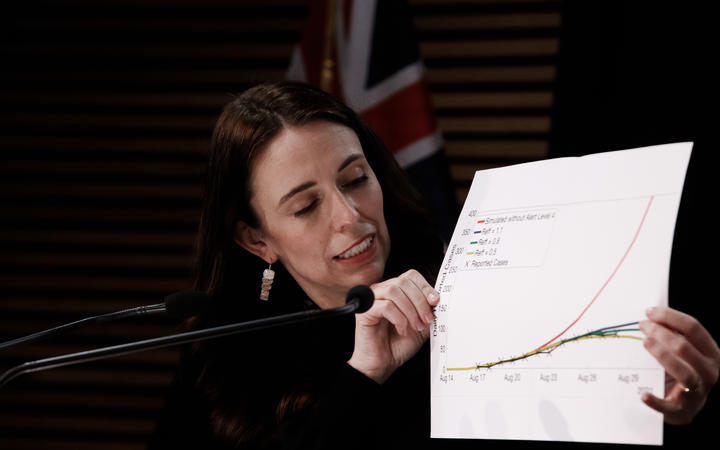 The red line on this graph represents what our case numbers would look like if we hadn't moved into lockdown, the prime minister says. Photo: Pool image / Robert Kitchin /Stuff

"The more we do to limit our contact, the faster we will exit these restrictions," Ardern says.

"Auckland is doing a huge service for all of us. And not just now, but throughout this pandemic. It's Auckland that has maintained our gateway to the world, that has done a lot of the heavy lifting in welcoming Kiwis home safely, that has worked hard to keep Kiwis safe when there has been an outbreak. Auckland has done it tough."

Ardern says the government is considering further restrictions under level 4 to prevent transmission occurring at the workplace. "It is a privilege to be open at level 4," she says.

Asked about supply of vaccines, Ardern says decisions will need to be made this week about whether New Zealand can continue to scale up vaccine delivery beyond what the government initially planned.

"Our planning has been for the programme to administer 350,000 doses per week. We have the supply and infrastructure to do this sustainably over a long period of time."

There has been an increase in demand, she says, and the government is working to reach that but falling short would merely mean falling back to the government's earlier plans.

"If we are unable to do this then the worst-case scenario is we pull back to our planned volumes ... contrary to the reporting, we are not running out of vaccine."

Associate Minister of Health Ayesha Verrall has slammed Bay of Plenty District Health Board (DHB) after it asked Pacific people to show their passports at Covid-19 vaccination appointments.

The DHB apologised last night over the move, acknowledging it was not the DHB's policy, nor a requirement, and that it had affected trust and confidence with its Pacific communities.

Asked about the request for people to bring passports to vaccination appointments, Bloomfield says that everyone is eligible to be vaccinated whatever their immigration status.

He says it was an attempt to smooth the process, as having a form of identification in absence of a National Health Identification number can speed it up.

Ardern says health professionals go through a process to ensure people are being given their dose and can be given a second one, but "there are ways we can do that without any ID".

"We just want you to be vaccinated, so being physically here, is enough. Nothing more."

Ardern says the government is working on both maintaining people's bookings while also having a surge of vaccinations in Auckland.

The Covid-19 Vaccine Independent Safety Monitoring Board believes a woman's death may have been caused by myocarditis, a rare side effect of the Pfizer vaccine.

Bloomfield says he recognises this will be a worry for some people.

"I want to reassure people that the vaccine is a lot safer than being infected with Covid-19. This is a very rare side effect ... we collect very good information on any adverse effects and we're not seeing anything out of the ordinary with this vaccine compared with what the experience is in other countries.

"The safety profile of this vaccine is very very good."

Ardern notes the most common cause of myocarditis is a viral infection.

Half of cases reported yesterday were household transmission

Experts have been welcoming signs that the lockdown has been curbing the spread of the Delta variant, and with new case numbers dropping to 53 today - down from a high of 83 new cases yesterday - the government will have some extra confidence in its decision to lower alert levels in wider New Zealand.

Speaking about today's case numbers, Bloomfield says while it is 30 fewer cases than yesterday, it is just one data point. However, he says 52 percent of the 83 cases reported yesterday were household transmission, and 72 percent did not create any new exposure events.

"So of those cases reported yesterday ... only 28 percent are considered to have been infectious in the community, which may simply have been a visit to a supermarket ... or may be an essential worker.

All of the new cases announced today were detected in Auckland.

Ardern says it's too soon to say if daily case numbers have peaked.

Bloomfield says there is no evidence of any different symptom pattern with Delta, and it is not known yet whether people in the New Zealand outbreak are experiencing milder symptoms if they have been vaccinated.

Ardern says she does not yet have a timeline for when the government will open up fresh MIQ spots.

"We have put a bit of a hold on that for now ... with an outbreak of over 500 people we are using the facilities for those individuals and that is the right thing to do."

She says the Crowne Plaza, which is also currently out of action, is one of the biggest facilities also.

"It only takes one ... it's actually about being vigilant regardless of the number you have coming in. What's clear though is our ability to expand that number is very limited. We just don't have the workforce to do it."