The latest population estimate for critically endangered Māui dolphins has fallen by 14 percent in the past five years, according to a report leaked to RNZ. The latest survey by the Department of Conservation showed there were just 54 remaining.

It came as a US Court considered a ban on New Zealand seafood exports.

Conservation group Sea Shepherd had asked the US Court of International Trade to bring in the ban in response to what it characterised as a lack of action by the New Zealand government to protect the critically endangered dolphins which were one of the rarest in the world.

Under US law, an import ban could kick in if a country was not applying similar protections to those in place in its own waters.

Sea Shepherd said this country had failed to implement a recommendation from the International Whaling Commission for all trawl and set nets to be banned out to a depth of 100 metres, areas known to be frequented by the dolphins.

In February a decaying female Māui dolphin was found washed up at Muriwai beach, pushing them one step closer towards extinction.

Sea Shepherd New Zealand spokesperson, Michael Lawry, said news their numbers were down even further could tip the balance of the case in its favour.

He said a ban on our seafood exports to the United States, worth an estimated $200 million annually, might finally convince DoC to bring in better protections. 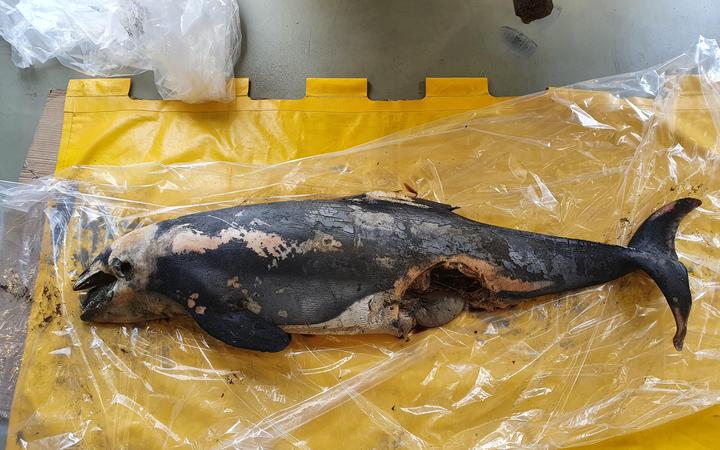 He said Fisheries NZ now needed to reconsider a proposal to potentially double the amount of snapper that could be caught commercially on the North island's west coast, an area the dolphins were known to inhabit.

"And this is going back to the days in the 70s and 80s and 90s where this whole problem started, where they were doing massive trawling on the west coast and this is when the Māui dolphin got hammered."

However, the leaked report said despite the decline in numbers, no extra protections were needed.

"The Māui dolphin TMP [Threat Management Plan] fisheries objectives remain met as the current fisheries measures effectively restrict the estimated level of fishing-related mortality to zero. We do not consider these measures, including those put in place last year, need to be reviewed at this time."

DoC had already been accused of trying to downplay declining Māui dolphin numbers such as taking four months to report the dead Māui dolphin found on Muriwai beach this year.

The leaked report showed its efforts to manage the release of the latest bit of bad news.

"A final report will be made publicly available before the end of the year. DoC and Fisheries New Zealand will work closely with both Ministers' offices to ensure a communications plan is in place prior to the joint Science Working Group meeting."

In a statement on Friday night, DoC's Marine Species Manager, Ian Angus, said as well as the updated Threat Management Plan, it had "also extended the West Coast North Island Marine Mammal Sanctuary and implemented bans on new seabed mining and seismic surveying activity to protect the dolphins, and created a Toxoplasmosis Action plan to address the threat of toxoplasmosis."

He said it was not possible to infer any "trend" in the population numbers which were in a range of between 48 and 66 individuals aged over one and therefore within the range seen in previous years.

DoC was waiting for the survey to be peer reviewed before making it public, he said.