A South Island festival organiser says they are scrambling to work out how to enforce mandatory scanning before being inundated with thousands of visitors. 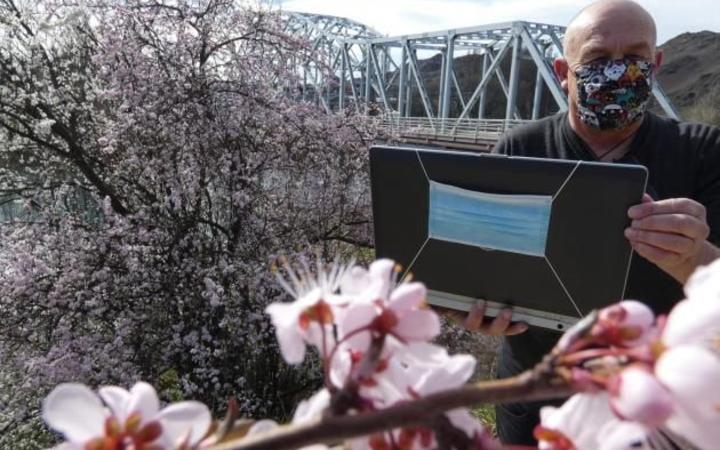 Yesterday, the Covid-19 response minister announced mandatory sign-ins were being introduced for busy places and large gatherings to ramp up contact tracing.

While the move had received support, others were questioning how it would work.

With five weeks to go before the 65th Alexandra Blossom Festival, stress has been mounting.

Event manager Martin McPherson spent a sleepless night pondering how mandatory signing-in would work for his event - if alert levels allowed it to go ahead.

The Central Otago festival is expected to attract an estimated 15,000 people and run along several blocks of the main street in Alexandra.

While McPherson supported the move to mandatory signing in for most venues and events in certain locations, he did not think it was feasible for the Blossom Festival.

"Apart from just putting tracer apps on every lamp post down the parade route and possibly ... having volunteers walking around with tracer apps, confronting people and asking them to sign in, I don't think there's any simple solution to this and I can't for the life of me make it work to a figure of 100 percent," McPherson said.

The events industry would go out of its way to find solutions, he said.

But he was worried about having mandatory record keeping when they could not guarantee enforcement.

"Especially in events which are highly managed by volunteers ... people are going to walk away from it because it ends up being in the too hard department," McPherson said.

"I haven't heard yet and it's too early to say whether we can apply for an exemption, and that's probably what I'll be looking for. But I'm also looking at other colleagues in the industry to see how they're going to handle this.

"As we are one of the first events out of the blocks post-Covid, we could be seen as a test case."

He was planning to seek some advice from the government and the event industry, and expected organisers of similar events - including Santa parades - would too.

In Dunedin, Woof! bar owner Josh Thomas said mandatory signing in seemed like a no-brainer, especially with the number of locations of interest cropping up in the latest outbreak.

"The reliance on people to have to look through those and spot every location they may have been at seems painfully manual," Thomas said.

"Scanning in is the absolute key to improving that and shortening future lockdowns."

He was hopeful it would help to speed up contact tracing and could reduce the need for lockdowns or limit their length.

Managing and enforcing signing in was already on his mind.

"When you run a bar, bad behaviour occasionally is just par for the course. So having the odd person who is a bit of a dick about signing in or scanning in doesn't phase me at all, they can just bugger off to another bar as far as I'm concerned.

"The privacy angle is being discussed a lot at the moment so I'm already thinking about different ways we can manage that."

Businesses that do not keep their contact tracing records up to scratch could face a fine varying between $300 to $1000.

"I find it a bit difficult for the business person to actually ensure that. It should be up to the individual that's using the premise," Tong said.

"However, if a business person does see somebody who hasn't, it's obviously worth a reminder. But there shouldn't be a pressure on the business person to ensure it's done, it should be up to the individual to get it done."

Mandatory record keeping would start seven days after any alert level change which allowed more businesses to open their doors.