The foreign affairs Ministry (MFAT) is looking into how to help New Zealanders who are in Afghanistan as more cities fall under control of the Taliban. 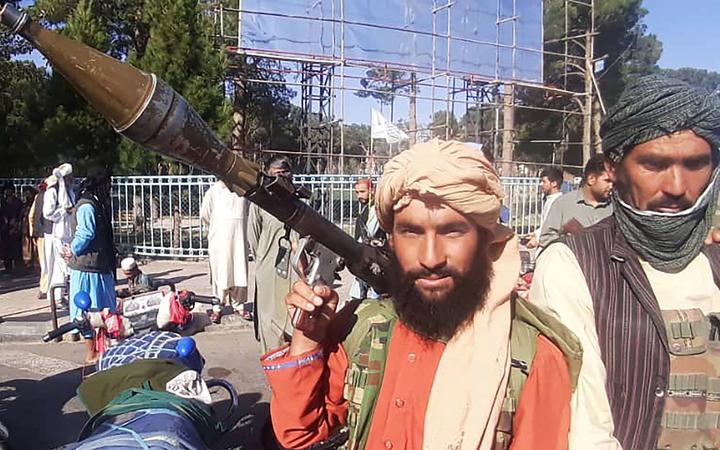 The Taliban now controls much of Afghanistan, pictured a Taliban fighter with a rocket-propelled grenade in Herat. Photo: AFP

New Zealand does not have diplomatic staff in Afghanistan, but the Government said 17 New Zealanders have registered as living there, though there may be others who have not registered.

More than half of the country has now been captured by Taliban fighters, including most regional capitals, as US-led forces leave the country.

Taliban fighters are moving closer to the capital Kabul, and have just captured Mazar-i-Sharif, the last major city in northern Afghanistan which was an anti-Taliban bastion and had been under government control.

Hundreds of thousands of people have been displaced, and western countries are scrambling to make plans to evacuate their citizens.

MFAT said it was crucial New Zealanders in Afghanistan registered with them at safetravel.govt.nz, and update them if their plans change or they are able to leave the country.

It was "exploring options" to assist those in Afghanistan, including by helping secure commercial flights for those who want to leave.

They were also talking with other governments whose citizens are trying to leave.

The Australian government has plans to send RAAF airplanes to bring diplomatic staff home, as well as interpreters and contractors who served alongside their troops.

Their planes are expected to arrive in Kabul as early as this week to begin the evacuation, that will be coordinated with the arrival of US and British security forces.

US President Joe Biden has faced international and domestic criticism for America's hasty retreat from Afghanistan, with British defence secretary Ben Wallace saying it risked returning the war-torn country to a breeding ground for terrorism.

The Taliban's breakneck advance towards Kabul has forced a rethink from the US on its continued diplomatic presence in Afghanistan.

The US will deploy 3000 troops to secure evacuations of US embassy staff from Kabul's green zone. Britain will do the same, sending about 600 troops on a short-term mission, and Canada will dispatch special force soldiers.