Burnt out and underpaid midwives say mothers and babies could be hurt if conditions in the sector don't improve. 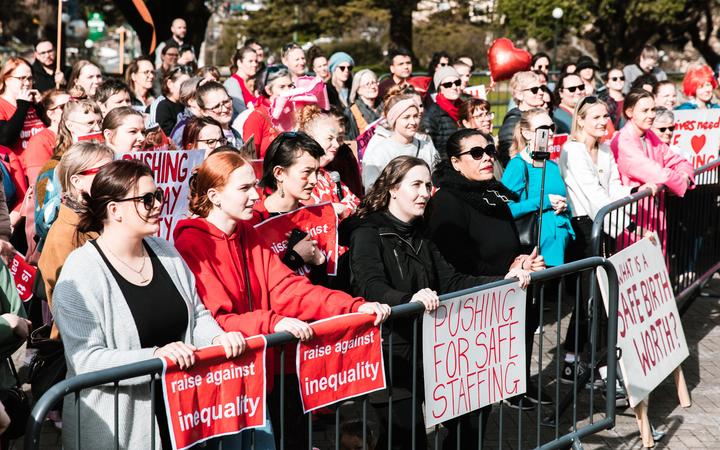 About 150 midwives and supporters marched to Parliament today, with midwives walking off the job in Wellington, Nelson and Marlborough as part of rolling nationwide strike action this week.

This midwife, who RNZ has agreed not to name, said work conditions were simply unbearable.

"I am so stressed I'm so close to burning out, I'm almost in tears talking about it.

"We are short staffed all the time. I hardly ever get a break."

She said the DHB's latest pay offer was insulting.

Hutt Valley midwife Anna Berry said the stress and long hours were brutal, forcing her to quit a previous job.

"I have absolutely personally suffered intense burnout. So I actually had to leave the burnout was so real ... I was suffering chronic nausea from stress."

Berry said sometimes she was the only midwife on a ward, and fears mothers and babies could be hurt if conditions don't improve.

"I absolutely think that there are already examples of women who feel neglected on ward.

"I certainly feel that women feel that they're being discharged too early. 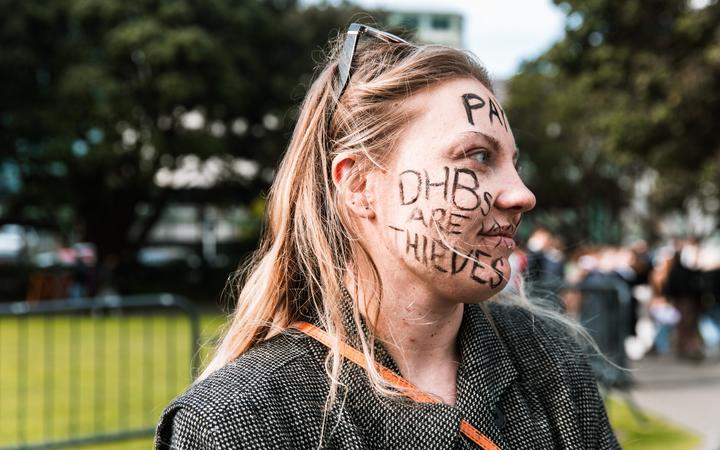 Jill Ovens from the union said the parties agreed on a number issues - except the money.

"And that's been so problematic because the DHBs are taking a very hardline position, ridiculously hardline, but also they're hamstrung because they're not the ones making the decisions.

"The Ministry of Health and other layers of bureaucracy and government above them are hamstringing them to the point where they come [to talks] and they cannot negotiate."

She said the lack of government support for midwives was turning parents against them.

"I want to say to Labour, you are losing women on this issue.

"I am really, really active in parenting spaces online and I'm noticing a shift and it's because women have had enough, we don't control the money and we just want you guys to get it done.

"We cannot lose another midwife in our community." 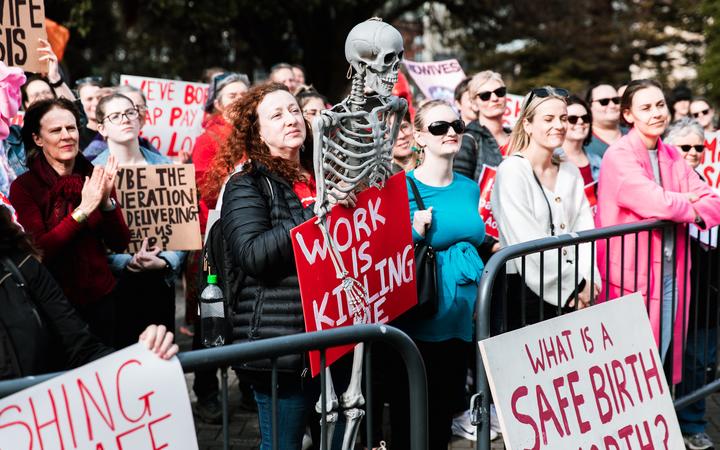 Health Minister Andrew Little spoke briefly, with no news about new money to settle with the DHBs.

"What I can say is we are totally committed to seeing through the pay equity claim, we're at the point where we can begin negotiations in the next two or three weeks.

"And as the speaker before said: we've just got to get it done."

He said there were plans to recruit more staff.

DHBs said their latest offer includes a $5800 salary boost - to be paid in a year - and an immediate $6000 lump sum payment.

A pay equity agreement was also being finalised which would likely see pay increases.

The DHBs said it was a good offer given the economic circumstances, and it was disappointed the union did not let midwives vote on it before walking off the job.

However the union said members knew the details of the proposal.

It said if a better offer was not forthcoming there would be a nationwide strike next Thursday.