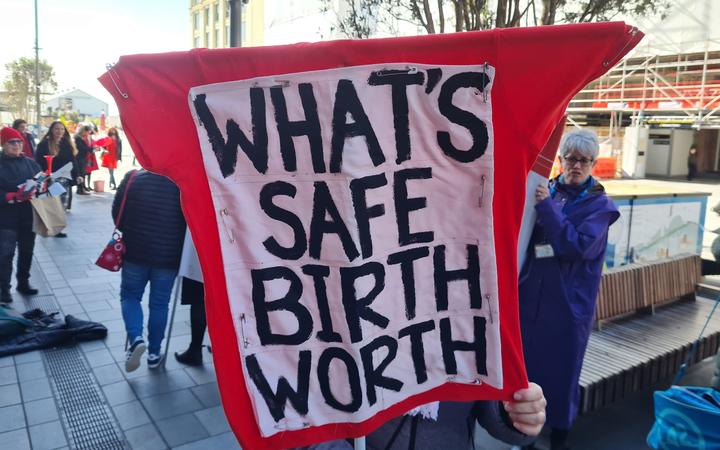 About 1500 hospital midwives are holding rolling eight-hour strikes this week, after failed negotiations over pay increases.

Today's strikes involve midwives employed by Tairāwhiti, Hawke's Bay, MidCentral, Whanganui, Wairarapa and Canterbury DHBs, who are off the job until 7pm.

Capital and Coast, Hutt and Nelson-Marlborough will strike tomorrow between 11am and 7pm, while all DHB midwives will strike between 8am and 8pm next Thursday 19 August.

In Wellington, a rally is planned on 12 August at Midland Park at 12.30pm, marching along Lambton Quay to Parliament at 1pm.

"We have an agreed set of Life Preserving Services (LPS) with MERAS to ensure we can provide patients, whānau and staff with the safest possible environment. Additional cover during the strike will be provided by other MDHB staff members."

At Wairarapa DHB labouring mothers presenting should expect the same services they would normally receive.

This has been made possible by the midwives that have agreed to provide LPS.

Maternity outpatients clinics have been rescheduled today around the times of the strike. The clinics provide routine pre-natal care.

Two registered nurses have been deployed into maternity to take care of other activities in the ward.

Whanganui DHB has a plan to use LPS and there should be no impact on outpatient services.

Some non-urgent planned appointments and procedures have been rescheduled and affected patients have been contacted accordingly.

Maternity units at Paraparaumu and Kenepuru will remain open.

The birthing suite will remain open but there will be no elective inductions of labour or Caesarean sections undertaken on the day.

Women's clinics: MFM appointments will continue to run as will the Wellington-based anti-D prophylactic clinic. There are no other maternity clinics running on this day.

The delivery suite will remain open but there will be no elective inductions of labour or Caesarean sections undertaken on the day.

The maternity ward and EPC will remain open.

MAU will close and all assessments will be done in the delivery suite. ANC will be open with very limited capacity for urgent diabetic women only.

CMT will continue to run with very limited capacity, urgent postnatal visits only and triaging of phone calls for women.

Anyone who is pregnant and has questions should speak to their Lead Maternity Carer (midwife or obstetrician).

Elective procedures and non-urgent appointments will be postponed and or rescheduled.

"We appreciate that many of our midwives will be providing LPS while others who are not rostered will be supporting the strike.

"LPS is on a voluntary basis, and midwives that agree to cover LPS duties are enabling their MERAS colleagues to strike. Other staff are of course aware of the strike action and will be extra vigilant, spending more time on the wards for example, while staffing levels are lower.

"People should access urgent and emergency care as they normally would. No elective caesareans have been scheduled for during the strike but emergency caesareans and other clinically indicated birth-related procedures will still go ahead.

"Women expecting to give birth during or close to the strike period should talk to their LMC or obstetrician for reassurance and unless advised otherwise, stick to their birth plan. If we need to reschedule any clinic appointments, we will be in touch on an individual basis."