Port of Tauranga workers are angry and disappointed they were brought back to work after being in contact with a ship with Covid-19 infected crew members, and say the handling of the vessel is shambolic, Maritime Union says. 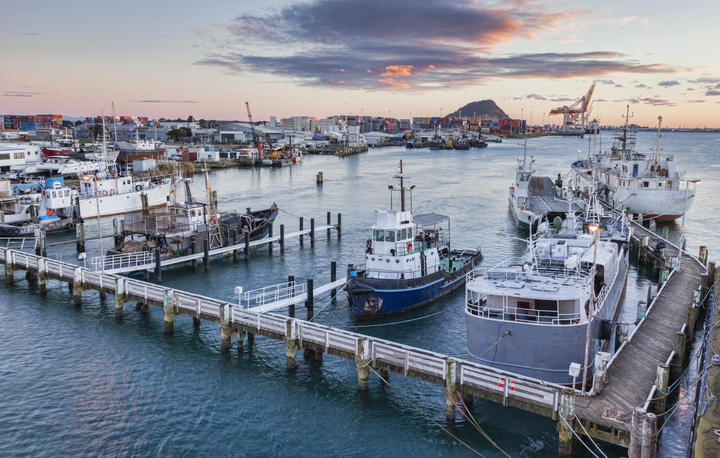 Eleven of the 21 crew of the Rio De La Plata, which is at sea off the coast of Tauranga, have tested positive for the virus. The test swabs were taken as part of the entry requirements for its next stop, Napier.

On Tuesday 3 August, Port of Tauranga received an alert from Maritime New Zealand that the container ship had been boarded two weeks ago by an Australian pilot, who recently tested positive for Covid-19.

However, the ship was cleared for berthing in Tauranga and it did so on Wednesday afternoon. A Port of Tauranga pilot then boarded the vessel and brought the ship to the Tauranga Container Terminal, according to Port of Tauranga.

But a few hours later at 9pm, Customs shut down operations on the ship. The pilot and the stevedores were advised to go home and isolate while awaiting further instructions.

A Port of Tauranga spokesperson said the next day authorities clarified the situation and advised operations could resume.

The advice changed on Monday morning, when workers were told to report to the port and get tested, as suggested by a statement from Ministry of Health.

"The union and its members involved in this are extremely disappointed and the members are especially angry at what I think can only be characterised as a shambolic approach to the treatment of this vessel," he said.

Ministry of Health said 92 workers at the port had been identified as having contact with the ship - 91 of them have been tested and 11 returned a negative result.

The ship had been worked on from Thursday through to Saturday, and workers were out and about until they were notified today, Butson said.

"What's more important now is that our members are very angry and very frightened because they've been mixing with families. We know some of them actually visited other centres of New Zealand over the weekend, and some attended sport events and so on with their whānau," he said.

"They're all sitting there, just wondering who may have been affected. As a result of of them going to work after initially being told not to go to work, working the vessel in good faith, trusting in the authorities, and the advice that was coming out and now we find out where we are."

A strict approach should be adopted, Butson said.

"I think whenever there's a boat that has known cases, nothing should happen with a ship until there are actual negative tests and there's substantiated signs to indicate that there's no risk on this vessel," he said.

A Napier Port spokesperson said it was taking precautions as it is expected to be the ship's next stop.

"Our protocol is that any vessel, seafarers or people that are close contacts of a confirmed case of Covid-19 are required to self-isolate onboard the vessel, at anchor, and test negative for Covid-19 before we will approve it to berth... We'll keep working closely with government agencies as to any next steps."

Maritime Union national secretary Craig Harrison said there needed to be a detailed profile of crew members' Covid-19 vaccination status and test results as they travel around the world.

"Basically getting an idea of what these vessels look like as they go around the world. You know there's an onus on these - international shipping companies are making massive profits at the moment to come and stay, whether the crew are vaccinated and understand what they're doing to help protect the countries and the borders that they go into."

Auckland University Professor of Medicine Des Gorman said the weakest part of the country's border was the ports. Given those infected were likely to have the highly-infectious Delta variant and the low vaccination rate of the general population of New Zealand, the country was vulnerable, he said.

Port workers needed to be fully vaccinated as soon as possible, Gorman said.

"It's a very worrying situation to have a ship full of people who are infected coming into facing with a port where 40 percent of people aren't vaccinated."

Crew members should not be allowed off the ship unless they need to be hospitalised, Gorman said.

Ministry of Health said it was continuing to investigate the vaccination status of the workers who interacted with the ship.

"An update figure is that nine workers have been fully vaccinated, and two have had one dose of vaccine. The vaccination status of a further four workers who had some contact with the ship is still being checked," it said in a statement.

"The ministry acknowledges the expectation that these figures would have been higher, given ongoing messaging to employers and employees around the vital importance of vaccination, particularly in protecting border workers. It is continuing to work closely with port companies, the maritime industry, sector agencies and DHBs on an ongoing basis to ensure the effective roll out of the vaccine to as many of these workers as possible."