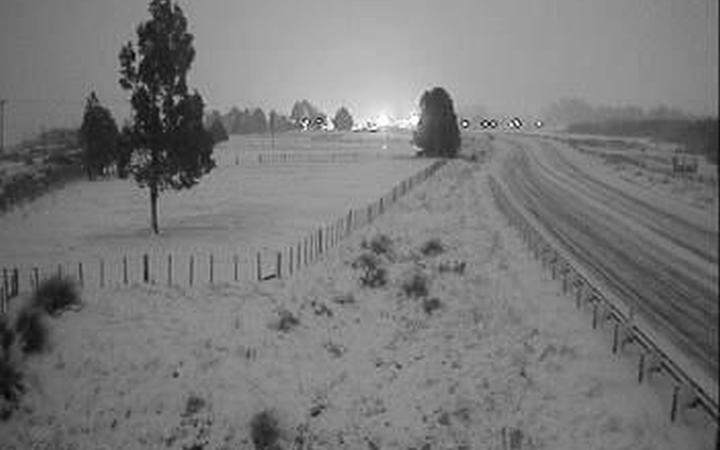 State Highway 1 looking north towards Waiouru at the start of the Desert Road this morning. Photo: NZTA

The Remutaka Hill SH2 remained open but there was snow forecast to 200m which may settle on the summit.

A number of schools in the central North Island are closed due to the snow conditions and power outages. Taihape Area School, Waiouru Primary School and St Joseph's School in Taihape are all closed.

Falls have eased in most parts of the south, though Arthur's Pass, Porters Pass and Lewis Pass may remain closed into the afternoon, Waka Kotahi said. A large caravan blocking Porters Pass needs to be towed out of the way to re-establish two lanes of traffic.

Lake Pukaki to Burkes Pass SH8 is closed to snow and ice conditions, while SH1 Waitati to Pine Hill has reopened.

State Highway 1 north of Christchurch is fully open and restored to two lanes after jack-knifed trucks on the Hundalees caused significant delays on Sunday afternoon into the evening for other truck drivers and many people in cars, the agency said.

Cook Strait ferry crossings are cancelled through to this evening.

Bluebridge said conditions through the Strait remained very rough and there were still strong winds in Wellington. It would make a decision later in the day about its evening sailings.

Interislander cancelled all sailings due to depart up to 6.45pm and suspended online bookings for the next three days while existing passengers were rescheduled.

Strong wind was disrupting flights into and out of Wellington Airport, and passengers were advised check with their airline or the airport's website. 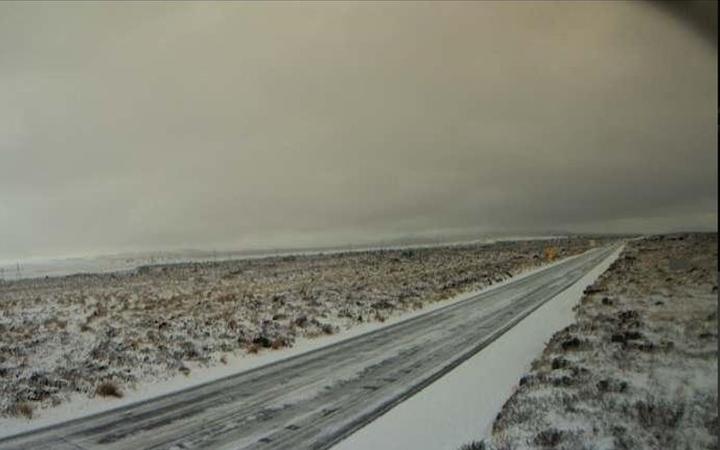 A motel owner in Waiouru said his guests were covered in snow. Gary, from the Waiouru Welcome Inn, said some tried to leave this morning but were turned back by police, including one person just trying to get to the local Four Square shop.

A heavy snow warning is in place for Hawke's Bay and Gisborne south of the city, Taihape and the northern hill country of Whanganui, Wairarapa including the Tararua District, and the Tararua and Remutaka ranges.

Gale southerlies and snow showers to 200-300m in southern and eastern areas of the North Island would gradually ease later today, MetService said.

As the southerly blast hit the South Island high country on Sunday evening, motorists were stranded in and around Arthur's Pass and some were taken in by locals.

Department of Conservation ranger Nick Menary said drivers who got stuck on the roads were put up overnight by civil defence at at Castle Hill, while others stayed at Flock Hill station and Arthur's Pass.

"We've basically got a full town and we've opened up our civil defence community centre for some of these stranded people.

"A lot of people opened up their homes in town because the paid accommodation filled up pretty quickly."

The skies cleared this morning and there was about 15cm of snow on the ground, he said.

"This is the first decent snowfall we've had in a couple of winters so actually we're kind of delighted really."

The dumping of snow forced Canterbury's Mt Hutt skifield to close yesterday and work continued today clear the access road. Once skiers can get to the slopes they can look forward to 35-45cm of fresh snow that fell overnight.

Ski Time accommodation manager Peter Wood, said the view from Methven was of snow on all levels of the mountain.

"Looking towards Mt Hutt, blue skies, the fields are covered in snow - fantastic."

Waka Kotahi spokesperson Tresca Forrester said the weather is due to clear in the South, and passes will be reassessed around midday, but conditions will be treacherous even if the passes are open.

"The roads are going to remain icy for the next couple of days," Forrester said.

Aaron Cormack, assistant operations manager with Hanmer Springs Attractions, said snowfall stopped late last night after and leaving snow 19cm deep in his front yard. He said roads around the inland Canterbury town were icy or slushy and graders had been out.

A farmer inland from Seddon, in Marlborough, said his property was spared snow but there was surface flooding as rain ran off ground already sodden from recent flooding. Warwick Lissaman said the heavy rain caused minor slipping on his farm.

North Canterbury farmer Henry Pinckney, whose sheep and beef farm is off the inland road south of Kaikōura, had about 25cm of snow.

He had no electricity, after power lines came down nearby, but his stock were in sheltered areas and he could get feed to them, he said.

For the 2nd time this winter, snow has fallen to sea level in Welly! pic.twitter.com/Y0Nw0bWjt7