A report from an environmental coalition says bottom trawlers have hauled up 128 previously unknown species in the past three years. 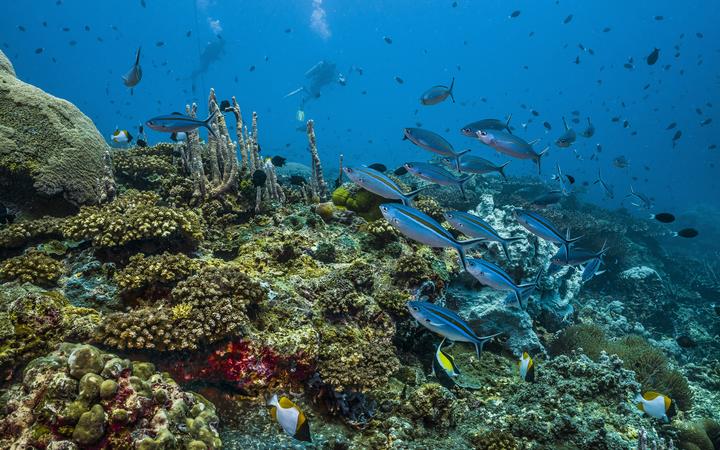 Coral on a seamount in the Pacific. Deep Sea Conservation Coalition said many of the previously unknown species of coral had come from seamounts, which are biodiversity hotspots. Photo: AFP / Christoph Gerigk / Biosphoto

The report by the Deep Sea Conservation Coalition will be presented to the Environment Select Committee on Thursday.

Environmental groups say it adds to a growing mountain of research that the fishing practice needs to be shut down.

A petition signed by 50,000 people to ban the bottom trawling was presented to Parliament last year.

"The reality is that these are very, very deep waters that people are trawling in and the only way we're learning what's down there is destroying it, and that's really tragic," he says.

"What we want to see is this coming to an end. There has to be a date after which those nets are off the bottom and we're no longer destroying the seabed."

The Deep Sea Conservation Coalition said figures in its report came from a NIWA report to Fisheries New Zealand in June.

Report co-author Karli Thomas said many of the new-to-science species had come from seamounts, which are biodiversity hotspots.

"These are really important spawning grounds and nursery grounds for some of our deep sea species. They're targeted for fishing because of that fact.

"Unfortunately, because some of these stocks have been fished down to such low levels - orange roughy in some places was fished down to only 3 percent of its virgin biomass - that's made these species much more congregated on seamounts. So the fisheries actually got more dependent on trawling seamounts because of the overfishing that's occurred in the past."

Thomas says the practice is devastating.

"The nets that they use are led by trawl doors that weigh 500 to 800 kilograms each", she said. "And the net itself is weighted to drag across the bottom.

The report says just over 14 tonnes of coral was dragged up by New Zealand trawlers in the 2018-2019 year alone.

But it says much more coral would have been destroyed that year, with some scientists estimating the total at well over 4000 tonnes.

"Some of these species are hundreds, if not thousands of years old.

"Black coral species are several thousand years old, so they're a very long-lived, slow-growing species. And then you have a big bulldozer bottom-trawler come along and destroy them.

"The work that's been done shows they have a very, very slow recovery - if ever," he said.

"We're talking about many decades, if not centuries."

Fisheries New Zealand said it closely monitored bottom trawling and worked to minimize its effect on the environment.

"The extent of bottom contact by New Zealand trawl fishing is annually monitored and reported on by Fisheries New Zealand to detect changes and inform management," Helson said.

"The number of commercial fishing trawl tows and dredge tows in New Zealand waters has fallen. The total area being bottom trawled in both the EEZ and Territorial Sea are declining.

"We are one of the most observed fisheries in the world and we have some of the highest rates of compliance in the world. In addition, we always working hard to do better; for example by introducing new technologies that geofence restricted or protected areas so vessels do not accidentally stray into them."

Oceans and Fisheries Minister David Parker said he had asked for advice on on the issues of bottom trawling and seamounts.