It is hoped the release of South Island tīeke into a wildlife sanctuary in Nelson could be the start of the first population of the birds on the mainland. 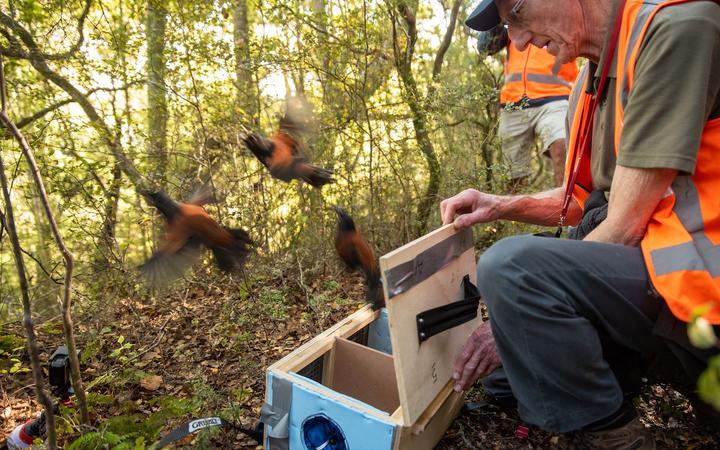 Forty tīeke have been released at the sanctuary. Photo: Supplied / Andy McDonald

The rare wattlebirds are the first species to be reintroduced as part of the ecological restoration of the Brook Waimārama Sanctuary.

It has been close to 20 years since the idea of a wildlife sanctuary among beech forest in the Brook Valley was raised by late environmentalist Dr Dave Butler.

In April, a team travelled to Motuara Island in Queen Charlotte Sound and caught 40 South Island tīeke to relocate to the fenced wildlife sanctuary on the outskirts of Nelson.

Sanctuary ecologist Robert Schadewinkel said in the months since, there have been numerous sightings with staff and volunteers out in the park playing tīeke calls in the hope of seeing the birds. 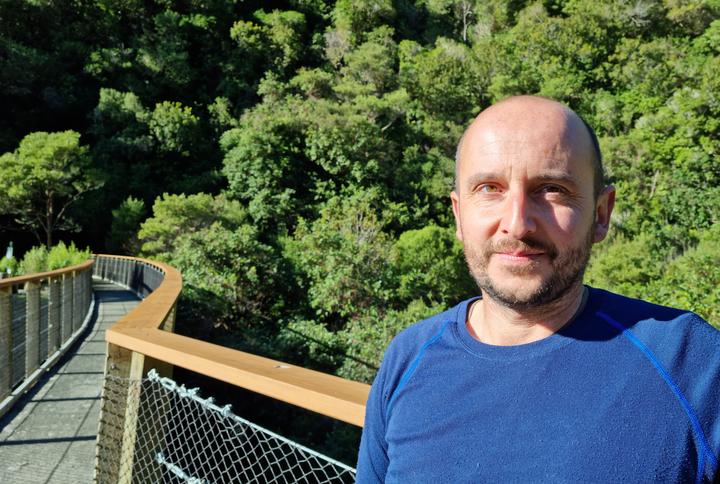 Next month, as the breeding season begins, a sanctuary-wide survey will be conducted in order to get an insight into the number of birds that have settled in.

Schadewinkel said one of the reasons the tīeke was chosen as the first species to be reintroduced to the sanctuary, was because it was a charismatic, inquisitive bird that people could interact with.

"Some people call it the monkey of New Zealand, they're just a monkey down in the trees and they are quite noisy birds as well." 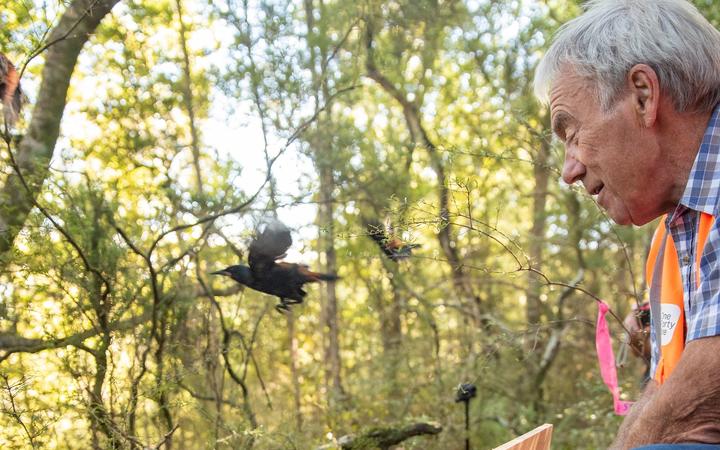 Tīeke come from the wattlebird family, along with the kokako and now extinct huia and Schadewinkel said the birds are very susceptible to predation.

"These birds have been in New Zealand as long as there is a land mass called New Zealand basically, and have evolved completely absent of mammals and so they are hypersensitive to any mammalian predation."

Schadewinkel said the release was a milestone for the sanctuary, the species and the South Island.

"If you are a member of the public and you live in Nelson, I mean, you've got tīeke which are like, extremely vulnerable and haven't been seen on the mainland for like, hundreds of years and now we've got tīeke here, just behind Nelson."

Once widespread across Te Waipounamu, South Island tīeke were extinct on the mainland by 1900.

A rat invasion on Big South Cape Island in 1964 devastated the population, with 36 birds relocated to other predator free islands nearby.

Te Papa bird expert Colin Miskelly said South Island tīeke would no longer exist if it weren't for that translocation.

"Every surviving South Island tīeke has descended from those birds that were rescued in the 1960s, so it is actually an example of a species that would be extinct if people hadn't intervened and rescued them."

A previous attempt to establish a mainland population of South Island tīeke at Orokonui Ecosanctuary in Dunedin failed in 2015 when stoats re-invaded the site and killed the birds.

Miskelly said in part, it was about restoring a species that was once a common member of the South Island forest bird community.

"They're also a very charismatic bird, they are a bird that really captures people's attention, partly because they are very noisy, and they forage in a very vigorous way.

"There are just some great quotes from the early New Zealand naturalists, I think it was Thomas Potts who described the South Island saddelback as 'bounding onto the scene like a harlequin in a pantomime' and that just really captures the joie de vivre I suppose of these birds.

"That when you encounter them they really stick in your mind because they're so distinctive and so full of life and loud and really active."

The Brook Waimarama Sanctuary Trust was established in 2004, with 690 hectares of mature beech forest enclosed by a pest proof fence in 2016.

The sanctuary is home to South Island robins, rifleman, bellbirds and tui among others.

It is hoped that carnivorous powelliphanta snails, kiwi, tuatara, kākā and kākāriki will be among the species re-introduced to the sanctuary as part of the ecosystem restoration project.