There are no new cases of Covid-19 in the community and four new cases in managed isolation and quarantine facilities. 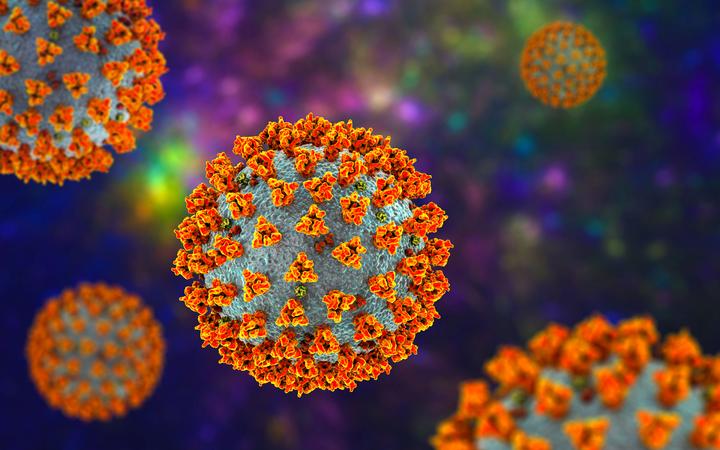 In a statement, the Ministry of Health said three previously reported cases have now recovered.

The number of active cases in New Zealand is 37 and the total number of confirmed cases is 2521.

The ministry said a previously reported case from 19 July has now been reclassified as historical and has been added to the historical cases tally. 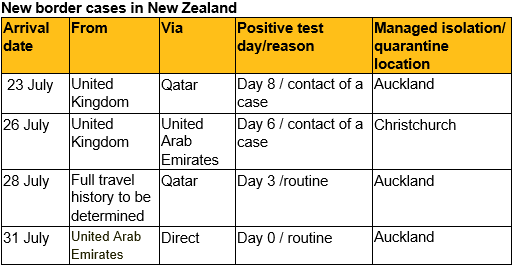 Update on returnees from Australia

Quarantine-free travel with Australia has been suspended since 23 July but since then there have been a number of managed return flights, which ended on Friday, the ministry said.

"As a result of Queensland's decision over the weekend to enter a three-day lockdown in parts of the state, we're contacting all travellers who've returned since last Monday, asking them to check locations of interest on the Queensland Health website.

"If people have returned on one of those managed return flights since last Monday, and have been at a location of interest at the relevant time, they should immediately isolate at home or appropriate accommodation and call Healthline on 0800 358 5453 for advice on testing."

The ministry said anyone else who has returned from Queensland since last Monday should remain vigilant, monitor any possible symptoms and ring Healthline and immediately isolate if any symptoms appear.

Contact tracing teams have identified 4884 people who've travelled back from Queensland since last Monday and have made contact with 4681 people, using details from Nau Mai Râ, to provide them with this advice, it said.

The ministry said contact tracing staff have also identified 2999 people who returned on managed flights from Victoria between 25 and 30 July and have been required under a section 70 notice to isolate until a negative day 3 test.

"Of those 1113 have so far returned a negative test; 1669 tests are due within the next couple of days; the remainder are currently being assessed for follow-up."

Over the weekend, a three-day mass vaccination event wrapped up in South Auckland with more than 15,500 people given their first dose of the Covid-19 vaccine.

Organisers called it an "overwhelming success" and feedback from those getting vaccinated was mostly positive.

It also said more than 1.94 million doses of the vaccine have been administered to date (to 11.59pm on 1 August).

"Almost 109,000 Māori have received their first vaccination. Of these, around 70,300 have also had their second vaccinations.

"Almost 75,000 doses have been administered to Pacific peoples. Of these, around 48,000 have also received their second doses."

The Mattina remains in quarantine at a secure berth in Bluff, the ministry said.

As of this morning, 14 of the original 21 mariners remain on board the vessel. Four mariners from the vessel, who tested negative for Covid-19, remain in a managed isolation facility in Christchurch.

"One of the two mariners currently in Southland Hospital is now well enough to be discharged from hospital today but requires ongoing medical care for an unrelated condition.

"Plans are under way to safely transfer him to Southern DHB arranged accommodation, where his health can continue to be monitored and treated."

The captain, who has tested Covid-19 negative, remains in Southern DHB arranged accommodation in Southland, the ministry said.

"Plans are also under way to transport one mariner, who is currently aboard the Mattina, to a managed isolation facility in Christchurch. This mariner has serological evidence of a historical Covid-19 infection. He was originally required to remain on board to maintain the basic functions of the vessel. However, the decision has been made that he can now disembark for quarantine at an MIQ.

"Transportation from the ship to quarantine for this mariner will be carried out using all Infection, Prevention and Control procedures including the use of appropriate PPE."

Meanwhile, the Viking Bay also remains in quarantine at a secure berth at Queens Wharf in Wellington.

The ministry said the vessel had received a deep clean and all 20 crew members were now back on board.

The vessel is expected to leave Wellington this afternoon.