Dunedin City Council has lifted the do not drink notice in Waikouaiti, Karitane and Hawksbury Village, almost six months after it was imposed.

In early February, residents of Waikouaiti, Karitane, and the Hawksbury retirement village were told not to drink the water or use it for food preparation, because of a spike in lead levels.

The most concerning reading was almost 40 times the acceptable level for drinking water.

The council and Public Health South said they were now confident the water was safe to drink as long as people flushed their taps regularly.

The council has not been able to conclusively determine the source of the elevated lead levels, but said it was likely to have come from pipes and fittings on private properties.

"However metals, such as lead, can leach from pipes and fittings into the water if it's been sitting overnight. This isn't just an issue for Dunedin - it's a national and international issue."

"We did more than 2000 tests to identify if and where lead was present. We were given many suggestions from within the community of where this may have been coming from in terms of getting into the raw water supply and all of these things needed to be investigated thoroughly." 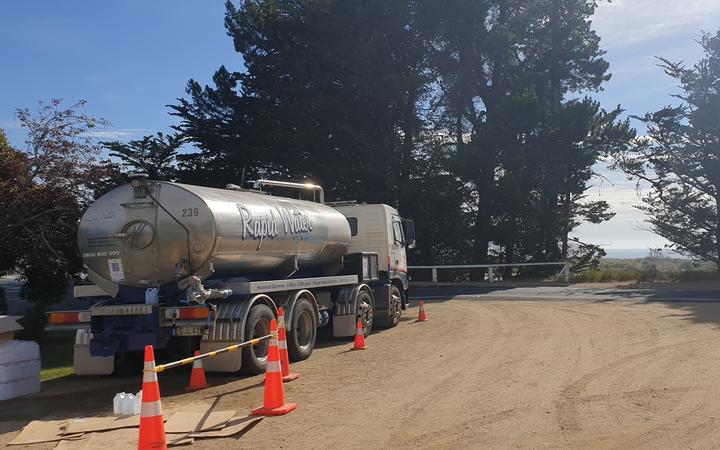 Water tankers were brought into Waikouaiti and Karitane after high lead levels were found in the water supply. Photo: RNZ / Tess Brunton

He said some of the possibilities looked into included old landfills, fly tips, and a nearby mine.

Safety of the community had been the council's top priority, he said, and it had been a long six months. He thanked the community for their support and patience.

Now that the no-drink notice had been lifted, Hawkins said the council would commission its own independent report into its response.

The council also plans to start a public campaign to encourage flushing taps before use.

It said the Ministry of Health recommended people flush a small volume of water - about 500ml - from the cold tap before using water for drinking, cooking or brushing teeth.

People should also run a cold tap for about 30 seconds each morning, to flush out the water sitting in pipes overnight.

Associate Minister of Health Ayesha Verrall said it was great to know residents can drink from their regular water supply again, and that concerns about lead have been definitively laid to rest.

She said a report looking at the health response to the lead contamination, which came out in March, raised concerns about New Zealand's plumbing standards, and she had passed this on to Building and Construction Minister Poto Williams. That was now being looked into.