Auckland's downtown waterfront has been gifted a new installment woven in to the landscape of the popular seaside walkway - carrying an important message about the health of the city's surrounding waters. 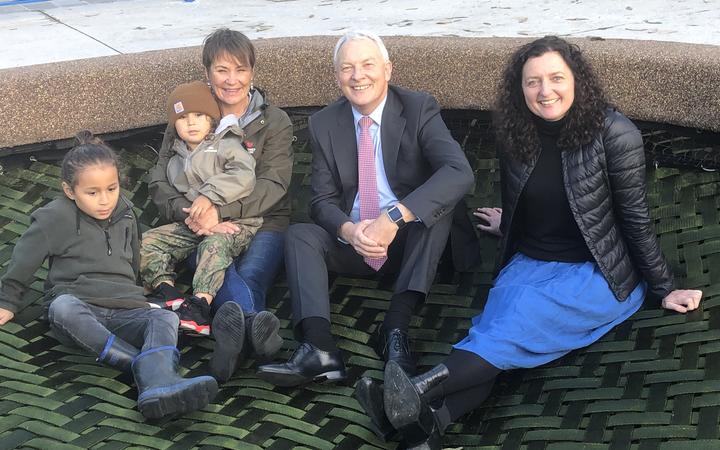 The unique and interactive piece laid down at Te Wānanga on Quay Street is a modern take on traditional raranga.

Sprawled above a purpose-built hole in the walkway the emerald, green safety webbing has been woven to form a net for passerby. Children can lie in and cloud watch while letting the cooling breeze and smell of salty sea spray surround them.

The harakeke art has been fittingly named 'Kōrimurimu' meaning to be covered in seaweed. The piece is a depiction of the depletion of seaweed in the Tāmaki area.

For artist and weaver Tessa Harris (Ngāi Tai ki Tāmaki) the experience of creating an innovative and technical take on a traditional craft was special.

She is both a weaver and stone carver - picking up weaving 20 years ago.

"It was named by mana whenua of Ngāi Tai ki Tāmaki and Ngāti Whanaunga, they gifted the name because when they saw it, they thought it reminded them of rimurimu."

"It was a long process, we started off as a kupenga, a net and from there we developed it into an actual woven piece" she said.

At the unveiling of the artwork this week, Auckland Mayor Phil Goff took a step onto the woven net to try it out for himself.

He said it was fantastic to bring an installation like Kōrimurimu into a public space where the land meets the sea.

"Fortunately, the webbing made by the army, which is incredibly strong so therefore very safe, is the same color as seaweed"

"You can lie on that, and you can hear the waves beneath you, you can look up at the blue sky." he said.

Goff said the council was seeking something that reflected the culture and heritage of te ao Māori as well as a modern work of art.

For Harris, as mana whenua, collaborating with the council and architects on the piece was fruitful.

She hopes the public enjoys interacting with Kōrimurimu and with her art which she was proud of.

"It's an amazing project to be apart, collaborating with architects and having mana whenua tell their stories of this area, so it's a huge honour to be a part of this."